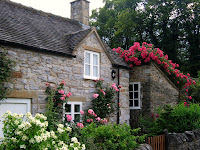 I have moved many times in my life, giving me ample opportunity to contemplate what it is that makes a house a home, not just some place you are currently residing. As I embark on the last move I intend to make for several years, into what I am already calling home (though I have only been inside the structure twice), it occurs to me that Austen covers the subject in some depth. She too knew the simultaneous pain of being uprooted from one home and surprising comfort of finding oneself suddenly again at home, now in a new place never before imagined. My husband and I looked at close to two hundred properties in 2009, trying to find the right house. So how can one tell if a house might suit them? Elizabeth Bennet wasn't exactly shopping around when she visited Pemberley, but still she knew the house, despite all its impressive grandeur, would fit her nicely. Easily, she can envision herself at home:

The housekeeper came; a respectable-looking, elderly woman, much less fine, and more civil, than she had any notion of finding her. They followed her into the dining-parlour. It was a large, well-proportioned room, handsomely fitted up. Elizabeth, after slightly surveying it, went to a window to enjoy its prospect. The hill, crowned with wood, from which they had descended, receiving increased abruptness from the distance, was a beautiful object. Every disposition of the ground was good; and she looked on the whole scene -- the river, the trees scattered on its banks, and the winding of the valley, as far as she could trace it -- with delight. As they passed into other rooms, these objects were taking different positions; but from every window there were beauties to be seen. The rooms were lofty and handsome, and their furniture suitable to the fortune of their proprietor; but Elizabeth saw, with admiration of his taste, that it was neither gaudy nor uselessly fine; with less of splendor, and more real elegance, than the furniture of Rosings.

"And of this place," thought she, "I might have been mistress! With these rooms I might now have been familiarly acquainted! Instead of viewing them as a stranger, I might have rejoiced in them as my own, and welcomed to them as visitors my uncle and aunt. -- But no," -- recollecting herself, -- "that could never be: my uncle and aunt would have been lost to me: I should not have been allowed to invite them." This was a lucky recollection -- it saved her from something like regret.

Emma too has opportunity to view her future home, though with little notion that Donwell will someday be hers. Though she has no eye for future proprietorship, the reader clearly perceives how comfortable she would be there. Rambling and unfashionable the Abbey might be, but it also undeniably a comfortable and well-loved home:

It was so long since Emma had been at the Abbey, that as soon as she was satisfied of her father's comfort, she was glad to leave him, and look around her; eager to refresh and correct her memory with more particular observation, more exact understanding of a house and grounds which must ever be so interesting to her and all her family.

She felt all the honest pride and complacency which her alliance with the present and future proprietor could fairly warrant, as she viewed the respectable size and style of the building, its suitable, becoming, characteristic situation, low and sheltered--its ample gardens stretching down to meadows washed by a stream, of which the Abbey, with all the old neglect of prospect, had scarcely a sight--and its abundance of timber in rows and avenues, which neither fashion nor extravagance had rooted up.--The house was larger than Hartfield, and totally unlike it, covering a good deal of ground, rambling and irregular, with many comfortable, and one or two handsome rooms.--It was just what it ought to be, and it looked what it was--and Emma felt an increasing respect for it, as the residence of a family of such true gentility, untainted in blood and understanding.--Some faults of temper John Knightley had; but Isabella had connected herself unexceptionably. She had given them neither men, nor names, nor places, that could raise a blush. These were pleasant feelings, and she walked about and indulged them till it was necessary to do as the others did, and collect round the strawberry-beds.

I wish our new home had strawberry beds, but I'm afraid the grounds are not so extensive as to accommodate any kind of fruit cultivation, let alone Mrs. Elton's donkey! But large pleasure grounds do not make or break a home. A home is not just a structure and its environs: it is a place so chock full of memories that it feels a part of oneself. To leave a home is incredibly painful, a fact to which Marianne Dashwood can attest:

Many were the tears shed by them in their last adieus to a place so much beloved. "Dear, dear Norland!" said Marianne, as she wandered alone before the house, on the last evening of their being there; "when shall I cease to regret you!--when learn to feel a home elsewhere!--Oh! happy house, could you know what I suffer in now viewing you from this spot, from whence perhaps I may view you no more!--And you, ye well-known trees!--but you will continue the same.--No leaf will decay because we are removed, nor any branch become motionless although we can observe you no longer!--No; you will continue the same; unconscious of the pleasure or the regret you occasion, and insensible of any change in those who walk under your shade!--But who will remain to enjoy you?"

So passed the first three weeks. Michaelmas came; and now Anne's heart must be in Kellynch again. A beloved home made over to others; all the precious rooms and furniture, groves, and prospects, beginning to own other eyes and other limbs! She could not think of much else on the 29th of September; and she had this sympathetic touch in the evening from Mary, who, on having occasion to note down the day of the month, exclaimed, "Dear me, is not this the day the Crofts were to come to Kellynch? I am glad I did not think of it before. How low it makes me!"

Sometime we do not realize a house is a home until we are called upon to leave it, as Fanny Price sadly discovers when exiled to Portsmouth:

Her eagerness, her impatience, her longings to be with them, were such as to bring a line or two of Cowper's Tirocinium for ever before her. "With what intense desire she wants her home," was continually on her tongue, as the truest description of a yearning which she could not suppose any schoolboy's bosom to feel more keenly.

When she had been coming to Portsmouth, she had loved to call it her home, had been fond of saying that she was going home; the word had been very dear to her, and so it still was, but it must be applied to Mansfield. That was now the home. Portsmouth was Portsmouth; Mansfield was home. They had been long so arranged in the indulgence of her secret meditations, and nothing was more consolatory to her than to find her aunt using the same language: "I cannot but say I much regret your being from home at this distressing time, so very trying to my spirits. I trust and hope, and sincerely wish you may never be absent from home so long again," were most delightful sentences to her. Still, however, it was her private regale. Delicacy to her parents made her careful not to betray such a preference of her uncle's house. It was always: "When I go back into Northamptonshire, or when I return to Mansfield, I shall do so and so." For a great while it was so, but at last the longing grew stronger, it overthrew caution, and she found herself talking of what she should do when she went home before she was aware. She reproached herself, coloured, and looked fearfully towards her father and mother. She need not have been uneasy. There was no sign of displeasure, or even of hearing her. They were perfectly free from any jealousy of Mansfield. She was as welcome to wish herself there as to be there.

But the most important aspect of any home, what clearly distinguishes it from just a plain old house, are the people who inhabit it. This is so well demonstrated towards the end of Northanger Abbey, when Catherine Morland receives such a warm welcome from her family after receiving her harrowing dismissal from General Tilney:

But, whatever might be the distress of Catherine's mind, as she thus advanced towards the Parsonage, and whatever the humiliation of her biographer in relating it, she was preparing enjoyment of no every-day nature for those to whom she went; first, in the appearance of her carriage -- and secondly, in herself. The chaise of a traveller being a rare sight in Fullerton, the whole family were immediately at the window; and to have it stop at the sweep-gate was a pleasure to brighten every eye and occupy every fancy -- a pleasure quite unlooked for by all but the two youngest children, a boy and girl of six and four years old, who expected a brother or sister in every carriage. Happy the glance that first distinguished Catherine! -- Happy the voice that proclaimed the discovery! -- But whether such happiness were the lawful property of George or Harriet could never be exactly understood.

Her father, mother, Sarah, George, and Harriet, all assembled at the door to welcome her with affectionate eagerness, was a sight to awaken the best feelings of Catherine's heart; and in the embrace of each, as she stepped from the carriage, she found herself soothed beyond anything that she had believed possible. So surrounded, so caressed, she was even happy! In the joyfulness of family love everything for a short time was subdued, and the pleasure of seeing her, leaving them at first little leisure for calm curiosity, they were all seated round the tea-table, which Mrs. Morland had hurried for the comfort of the poor traveller, whose pale and jaded looks soon caught her notice, before any inquiry so direct as to demand a positive answer was addressed to her.

Though we do not yet live there, I know our new house will be the happiest home I have yet inhabited, complete as it will be when filled with my husband and cats. I shall miss it when away and relish each homecoming. We will fill it with our things, old and new, until our personalities sing out from the walls, just as the interiors of Pemberley and Donwell echo their owners. Someday we will leave for a new home and the memories will wash over us with their accompanying pains and joys, making our hearts weep for the past, but then the process will begin all over again and we will forge new experiences, creating fresh reminiscences in a place I have never yet beheld. In the meantime, I intend to make the most of our life in the first house we picked out as a home. Each trial and triumph will surely add to its glory. Isn't life wonderful!
Posted by Alexa Adams at 12:38 PM