The Pemberley Chronicles: A Woman of Influence by Rebecca Ann Collins 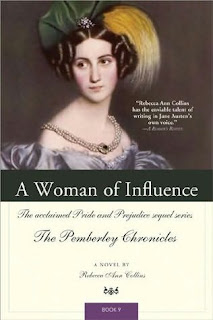 I was pleasantly surprised by this book (my fears for it being expressed in my review of the last, Recollections from Rosings), which proved to be another tale of second attachments, this time focused on Becky Tate (daughter of Mr. and Mrs. Collins). A Woman of Influence sees Becky an established widow, comfortable in her singleness, discovering the joys of love that were absent from her marriage. However, the first half of the book focuses more on Becky's attempts to aid an unrelated character, Alice Grey, to reunite with her husband, falsely accused and incarcerated. Ms. Collins has a tendency to do this: to insert a side story, usually reflective of her characters' reformist propensities, but with little to do with the chronicling the lives of the Darcys, Bingleys, Gardiners, Fitzwilliams, and Collinses. This is particularly frustrating as we approach the final book and the increasingly obvious truth that Lizzy, Darcy, Jane, and Bingley cannot possibly live much longer.

Ms. Collins almost never includes specific dates in her books, but in this one she places the action firmly in the years 1868-1869. This means, best case scenario, that Lizzy is in her seventies and Darcy in his eighties. Though neither make frequent appearances in this volume and their ages are never addressed, that time is slipping away can be clearly felt, particularly in Lizzy. Mrs. Darcy has become very much the grand old lady, in many ways not terribly dissimilar from Lady Catherine. On the few occasions (mostly towards the end of the book) when she takes center stage, her outspoken nature reminds the reader that this is no longer Lizzy Bennet of Longbourn, nor has she been in many years, but a very wealthy lady who has spent the vast majority of her life in command, with her opinions and ideas treated with respect and deference. Note the manner in which she comments on Becky's second match:


"Have they?" said Elizabeth. "Well, I suppose it is not an unsuitable match."


"No indeed," said Mr Darcy. "They are both persons of independent means and, I daresay, mature enough to know their own minds."


"Which is certainly more than could be said for Becky when she married Anthony Tate in such a precipitate fashion," Elizabeth remarked, recalling the day she had heard the news from her sister Jane.


"Why, Becky was scarcely seventeen. When Jane told me of their engagement, you could have knocked me down with a feather. It had all happened so suddenly, I was afraid it would end in tears, and it did. Tate was only interested in business and politics, and poor Becky, for all her hard work, was treated rather shabbily when he left everything to Walter and that dreadful wife of his. Everybody knows she is a grasping, unpleasant sort of person."


Mr Darcy then reminded his wife that Mr Tate had also left the entire proceeds of his American estate in trust for Becky's use and she did get the house in London. To which Elizabeth had to add that it was no more than she deserved, considering all the hard work Becky had done, lobbying for her husband's favorite causes and promoting his business ventures.


"It beggars belief that he could be so unfeeling as to leave their family home to Walter, suggesting that he reach some accommodation with his mother. It was a callous, heartless thing to do, and I am sure Becky was very hurt," she said.

No, it's not quite, "I must have my share of the conversation," but Elizabeth's tone resembles Lady Catherine's more than her own, youthful self.

Usually there books end with an indication of the story line in the next, but not this one. This increases my sense that the final book, entitled The Legacy of Pemberley (due out in November), will see a return to our original cast as they wrap up their lives. I am both excited to get back to the characters I love so much but also terrified that it will be unbearably depressing. A few more months will tell.