Ward No. 6 and Other Stories by Anton Chekhov

I messed up. Even though I have had the date of my Classics Circuit review of Ward No. 6 and Other Stories by Anton Chekhov for the Imperial Russia tour posted in my side bar for a month, I was so sure it was supposed to be for today, the 9th, but it was yesterday, the 8th! See what my erratic blogging has lead to! I am heartily ashamed of myself, even more so as this review will be far shorter than I would like to make it. I'm out of town and there just isn't time for more. 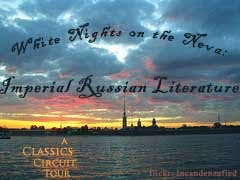 The twenty three short stories that are collected in this Barnes & Noble Classics edition are beautiful examples of Chekhov's mastery of the form. Yes, we are a long way from Jane Austen, but like all masters of fiction, she and Chekhov do share this in common - their writing illuminates truths about the human condition. Chekhov's stories are vignettes, glimpses of late 19th century Russian life, in which he dwells on the purpose and futility of life, the distances between one human mind and another, and the moral condition of our species. Like most Russian writing of this time (which is amongst my very favorite literature, by the way), it feels remarkably modern to the reader, especially when compared with contemporary British literature. Chekhov anticipates the themes of 20th century fiction, with all its existential isolation and psychological influences.

For example, in the story "Typhus" a young soldier becomes ill on a home bound train. Chekhov captures beautifully the disorder of a fevered nightmare as we follow him, stop after stop, through his sufferings, feel his longing for his mother, sister, and the comforts of home, follow him in a daze into his home where he collapses, and watch as he battles the disease. Finally he wakes, healthy and happy, only to learn that his dear sister, who he has been pinning for throughout his illness, has died in nursing him. In "Ward No. 6" a doctor finds himself as mercilessly put into a mental ward as he has mercilessly consigned inmates there before him. In "The Dependents" an old man must sacrifice his faithful dog and horse or go hungry himself. In "A Dead Body", the living watch over an unknown corpse. This story is perhaps the best parallel to Chekhov's overall theme - the individual is subservient to life which will continue on incessantly, never stopping to consider our individual triumphs and hardships. 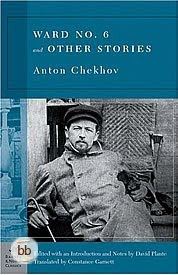 This sounds rather depressing, but Checkhov simultaneously glories in the capabilities of the human mind and the individual experience. In "Grisha" a young boy discovers the world outside his home for the first time. In "The Grasshopper" he rakes us through the joys of new love. In  "The Kiss"  a shy soldier find all the delights of romance in a single, mistaken kiss. These are glorious moments, in which Chekhov celebrates imagination, emotion, and experience, but the boy is overwhelmed by the world, the newlyweds' marriage falls apart, and the soldier experiences the inevitable sorrows of love. His story ends with these melancholy contemplations:

And the whole world, the whole of life, seemed to Ryabovitch an unintelligible, aimless jest.... And turning his eyes from the water and looking at the sky, he remembered again how fate in the person of an unknown woman had by chance caressed him, he remembered his summer dreams and fancies, and his life struck him as extraordinarily meager, poverty-stricken, and colourless....

Here is the essence of Chekhov: life is glorious, amazing, capable of lifting humans into ecstasy, but still meaningless. Joy is checked with sorrow, which can be counted on to dominate. The doctor from "Ward No. 6" declares:


Prisons and madhouses there will not be, and truth, as you have just expressed it, will triumph; but the reality of things, you know, will not change, the laws of nature will remain the same. People will suffer pain, grow old, and die just as they do now. However magnificent a dawn lighted up your life, you would yet in the end be nailed up in a coffin and thrown into a hole.

Nevertheless, though Chekhov promises pain, overall he embraces life. For, though our actions might be futile, what else have we to do? He recommends making the best of it which, though the message might be conveyed in a rather dark manner, is one I can easily wrap my head around. These stories are beautiful explorations of humanity which I highly recommend to anyone interested in Russian literature and/or the short story form. I only wish I was at leisure to review the collection in far greater detail.
Posted by Alexa Adams at 6:59 AM