Pistols for Two by Georgette Heyer 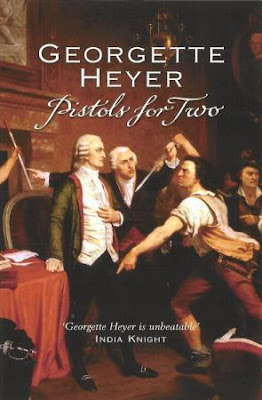 I accidentally came across this collection of short stories by Georgette Heyer when browsing on Amazon. What could I do but immediately order a used copy, imported or not? I very much enjoy short stories, as I very much enjoy Heyer, so I anxiously awaited its arrival and, as soon as I got the volume in my greedy little hands, immediately began to read it. Eleven stories in high Heyer style comprise Pistols for Two, an irrepressibly delightful book. Readers of Heyer will recognize many of her stock characters: young bucks teeming for a fight, jaded beaus intolerably bored with their privileged existences, miserly old men who determined to marry servants as a means of cheaply insuring their domestic comforts, impoverished young woman resigned to unpromising futures as governesses, hoydenish heiresses who actively flout convention, and schoolroom misses who are as ignorant as they are charming. Though the stories are familiar and formulaic, like all of Heyer's work, they are also irrepressibly delightful: their very reliance on cliche providing the bedrock for the misadventures that ensue. I will briefly summarize each story and, as I do so, will continue to marvel at authoress' ability to compress all the liveliness and excitement of her novels into a few short pages.

When Marianne Treen returns to the neighborhood, transformed from the irritating girl she was into an incomparable beauty, best friends Tom and Jack become amiable rivals for the fair one's hand. But when Tom thinks Jack has dealt him a false turn by giving Miss Treen a bouquet when Tom has none of his own to bestow, the two friends see no other option but to meet with pistols at dawn. Fortunately for the boys, Sir Gavin Kilham, a renowned nonesuch, is on hand to grace the duel with his impeccable presence while making his own bid for the lovely Miss Treen.

When her niece, Lucy Tresilian, and Arthur Rosely request her blessings on their engagement, Miss Nell Tresilian find herself in an awkward predicament. While she thinks they make a fine couple, Arthur's uncle, Lord Iver, is dead set against it. When the young people elope, the aunt and uncle set off for the Scottish border in pursuit, thrown together for the first time since their own broken engagement, many years ago. How can such a premise be anything other than utterly charming?

Sir Charles Wainfleet is not pleased when he is requested to collect the young Miss Massingham, granddaughter of a family friend, from her school in Bath. Little did he know that such a seemingly mundane task would involve clandestine trips to the mantua maker, the acquirement of a dog, and a run in with his most outraged fiancee.

Letty Wrexham has a talent for getting into mischief, and when she orders a pink domino her brother, Giles, knows she is determined to go to the Pantheon masquerade despite being forbade to do so. So to the Pantheon he goes, determined to catch Letty in the act, only to mistake her pink domino for that of another lady, a Miss Ruth Welborne, who turns out to be exactly who he has been searching for all along.

A Husband for Fanny

The widow, Mrs Clarissa Wingham, after spending years in country seclusion, returns to the world of the ton to present her only daughter, Fanny, having scrimped and saved in order to provide her with a proper London season. When the Marquis of Harleston shows Fanny marked attentions, Clarissa is ecstatic, despite the warnings that no lady has ever succeeded in catching the Marquis' heart. But is he really interested in Fanny or is there another motive for his regular calls in Albemarle Street?

To Have the Honour

Lord Allerton returns home from the Peninsular Campaign to find his late father's debts immense and his mother living on credit extended under the presumption he shall marry his cousin, Hetty Clitheroe, longtime resident of the Allerton household. Aghast, he hurries to assure Henry (Lord Allerton's particular name for Hetty) that she is under no obligation to him. While both are relieved to escape a marriage of convenience, there is far more to this thoroughly lovely tale, and it is Miss Trix Allerton who provides the answers.

Night at the Inn

In this story Heyer indulges her penchant for mystery, depicting a single night spent at a lonely inn with only three guests: a Miss Gateshead, daughter of a clergyman embarking on her first position as a governess, one John Cranbrook, a young man recently returned to England from Lisbon, where he worked as a clerk in a counting-house, and Mr Waggleswick, a silent man in a moleskin waistcoat.

The Duel
(Read this entire story in the preview to The Greatest Romance Stories Ever Told, complied by Nancy Butler (2005), on Google Books, p, 5-19)

A board "Pink of the Ton" discovers new interest in life when he finds a young lady, Dorothea Saltwood, hiding behind the curtains of his dining room. When she confesses that she is trying to contact the disreputable and deadly Lord Rotherfield, whom her brother has insulted and must face at twenty five paces on the morrow, what can he do but aid her in her task? This might be my favorite story in the book.

This story begins with one of the darkest scenes I have yet read in Heyer, in which a drunken Sir Ralph Morland, having lost everything, stakes his unmarried half-sister, Helen, to the also intoxicated Lord Carlington Carlington in a game of hazard. Carlington wins and, insulted and disgusted, Miss Morland goes with him. So begins a flight to the border, impeded by only one obstacle, other than the obvious scandal: Lord Carlington's engagement to a different lady. Be assured, as seedy as the story begins, it is equally lighthearted by the end.

Two cousins race to Bath at a miserly relative's command, Miss Sophy Trent as determined to beat Mr Joseph Selsy there as he is to beat her. When the post coach overturns on an icy road, Miss Trent receives some unexpected help from Sir Julian Arden who, despite being "Beau Arden", is unaccountably (and delightfully) totally unknown to her.

Lord Stavely can no longer ignore Sir Walter Abingdon's incessant invitations to Melbury Place. But when he gets lost en route and meets Mr Tom Hatherfield, drinking away his regrets that he must elope with Sir Walter's daughter, Annabella, that very night in order to save her from the horrible old man invited to Melbury expressly to marry her, Lord Stavely finds the visit holds far more promise than he ever expected.

Don't forget to check out all the Heyer happenings this month during "Celebrating Georgette Heyer" at Austenprose!
Posted by Alexa Adams at 11:00 AM