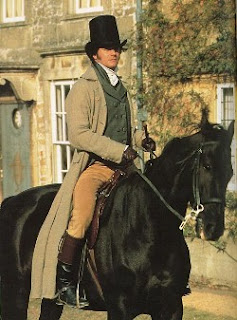 It is a truth universally acknowledged that Mr. Darcy must ride a superior horse. I have read a lot of Pride and Prejudice fan fiction and have come across a lot of different depictions of the animal in question. It's kind of fascinating, all the different names and temperaments, and I thought it would be fun to look at some of his more memorable steeds. So often these horses reflect essential aspects of a novel's plot. Let's take a look, shall we?

I love the name Regina Jeffers gave to Mr. Darcy's horse in Darcy's Passions: Cerberus, the hell hound. How very appropriate, especially in this scene:


Shocked, Darcy felt revulsion run through him. It was George Wickham! He was here in Hertfordshire - his former friend! The man whom he hated the most in the world stood in the streets of Meryton talking casually to the woman he found most exciting. What a twist of fate this was! How could God send him such a trial? The maligned feelings must have been obviously written on his face for he noted the surprise in Elizabeth's eyes as she observed Darcy's and Wickham's silent exchange. Wickham recovered from the initial revelation quicker than did Darcy. With a smirk, he tapped his hat in an extemporaneous greeting. Darcy's repugnance would not allow his returning the greeting; instead, he stiffened from the contemptible display and spun Cerberus away from the group.

In Abigail Reynolds' The Last Man in the World (rereleased under the title Mr. Fitzwiliam Darcy: The Last Man in the World), Elizabeth and Darcy marry after his first proposal, without establishing any kind of true understanding. The subsequent turbulence in their marriage is well reflected in the names of both their horses, which echo their emotions. Elizabeth's Pandora represents the pent up chaos of her feelings, while Darcy's Hurricane aptly echoes his stormy sentiments.


Ignoring her thanks, he mounted his horse and started off down the path. Pandora followed her stablemate's lead, which was fortunate, since Elizabeth felt unequal to putting her lessons in horsemanship to the test. She could find no relief for her sense of loss.


He made no effort to converse as they continued their trek, and Elizabeth was grateful to see the stables coming into view. She did not realize until she dismounted at the block that in her distress over their discussion, she had not given a second thought to her fear of riding. Excitedly she turned to Darcy, wanting to share this success with him, but his back was to her. Her courage failed her as she heard him brusquely ask the stable boy to saddle Hurricane.


She could not face him. Instead, she collected Pandora's reins and led her towards the stable. One of the stable hands offered to take her, but Elizabeth shook her heard. At Pandora's stall, Elizabeth removed her bridle and found a wizened apple. The horse took the treat from her happily, then whickered in her ear.


She saw Hurricane being led past on his way to Darcy. With a shiver of something that might have been pain, Elizabeth buried her face in Pandora's mane, letting the horse's warmth comfort her. 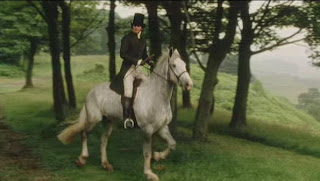 I love this scene from The Confession of Fitzwilliam Darcy by Mary Street, in which Mr. Darcy rides a horse named Starlight to Pemberley when he unexpectedly comes upon Elizabeth and the Gardiners, leaving him appropriately starstruck:


An hour later, Starlight freshly shod, I resumed my journey. Ad sometimes happens in the heat of summer, there was a swift, sudden downpour of rain, shortlived but drenching. I grimaced as I felt the dampness penetrate my clothing, but I forgot my discomfort at my first sight of Pemberley.

Over the amber-coloured stone of the buildings, a perfect rainbow arched the sky and, in the watery light, the house seemed suspended in another dimension, shimmering with an unreal, almost magical quality.

I reined in and stared silently as a strange, dreamlike feeling took hold of me, as though the earth was holding its breath, as though time was standing still.

Gradually, the illusion faded in the sun. Starlight whinnied, and I again became aware of discomfort from my damp clothes. I rode on. In the stable yard, I handed the mare to a groom and turned towards the house.


The I started, fo a mometn believing myself in the grip of another illusion: I had caught sight of a bonnet I recognized.


The beautiful dark eyes were regarding me in consternation and dismay.

Perhaps Mr. Darcy's most memorable horse is Nelson, as in Admiral, from An Assembly Such as This: A Novel of Fitzwilliam Darcy, Gentleman by Pamela Aiden. The untamed power of this animal perfectly compliments Ms. Aiden's Fitzwilliam Darcy as he struggles to contain his feelings for Elizabeth Bennet.


Stationed at the bottom of the carriage stairs, Nelson shook his head, stepping forward, then back, and generally intimidating the Netherfield grooms. His ears pricked at the opening of the door, and he swung his great head toward the sound. Upon beholding his master, he made a great show of stamping a hoof perilously close to the groom's foot and gave an indignant snort, sending trails of vapor into the cold morning air.


"G'morning, sir," the groom panted, making no attempt to disguise the relief on his face. "He's a bit high in the instep this morning, sir."


"So it would appear! He's been giving you trouble again?" Darcy frowned into Nelson's face, but the animal merely shrugged off the reprimand, tossed his head, and sent another flume of breath into the air. "You do look the veritable dragon this morning, old man." He took the reins and, declining a leg up from the beleaguered groom, vaulted into the saddle. Nelson took advantage of the lull in control as Darcy attended to the stirrups to execute a jolting dance, reminding his rider that, in the world of horseflesh, he was just as well connected as Darcy. "Oh, so that is how it is! So puffed up in your own conceit that you disdain to prectice the manners of a gentleman." Darcy gathered the reins and drew them back until contact with Nelson's mouth was firmly established and then nodded at the groom to let go his head.

The horse's excitement as Darcy allowed him to break into a stiff-legged trot was palpable, confirming his rider's suspicion that this morning's outing would be a test of wills. Strangely, the prospect was not unwelcome. The rigors of such an exercise would surely distract or perhaps banish entirely the constriction that still hovered under his heart. "Evidently, we both need the blue devils ridden out of us!" Darcy whispered. Nelson's ears flicked back at his voice, and his snort assured his master of his complete agreement

Darcy signaled the advance to a canter as they approached the fence that girdled the wide field east of the hall and set his jaw as he felt Nelson gather speed for the fence. In a matter of moments, it loomed before them, wavering in the morning mists. They thundered forward; the entire world was become only those sounds of pounding hooves and the creaking leather, and the brutal fact of the fence before them. Suddenly, the fence disappeared as Nelson's forelegs came up. His back arched, and in a silence outside of time, he carried his rider over the fence. He landed with a jolt that forced a grunt from his great lungs, but his hindquarters were already gathered for the long gallop across the field. Impulsively, Darcy gave him his head, man and beast throwing caution to the wind, flying as if chased by the Devil's own hounds.

Have I missed your favorite horse of Mr. Darcy's? Please share the name of your preferred steed!

Labels: His Perspective, JAFF, Mr. Darcy, Pride and Prejudice, Sequels, What If?