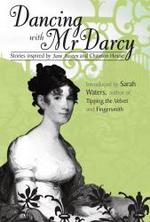 Ever since I learned of the existence of Dancing with Mr. Darcy, I have been aching to read this collection of twenty short stories inspired by Jane Austen and Chawton House Library. Now I wish I had waited until October 19th, when the US edition comes out, rather than importing a copy from the UK. The collection did not live up to my expectations. First of all, there is a noticeable absence of both dancing and Mr. Darcy. Secondly, though many of the stories were sweet, rather than having clear Austen connections most only vaguely invoke my favorite lady. The majority of the book resembles modern memoir more than Austen. It may not be very highbrow to say so, but I would have far more enjoyed a collection of pure JAFF. As a result, I have been at a bit of a loss regarding how to proceed with this review, and have decided to restrain myself to only commenting on those tales I found superior to the rest, not wishing to turn this post into little more than a rant about which most annoyed me.

I feel I must mention the winning story from the competition that compelled this collection of stories, which is also the first in the book. Entitled Jane Austen over the Styx, Victoria Owens tells the tale of Austen's descent into Hades, where she is confronted by her older female characters, accusing her of portraying them in a negative light. Our witty, fast-thinking Jane offers no better defense than showing younger woman negatively as well, using the interactions between Emma Woodhouse and Miss Bates as her example. It's a cute a whimsical story, but it infuriated me as much as it entertained.

I much prefer the second story in the collection. Second Thoughts by Elsa A Solender tells of the evening Jane Austen said yes to an offer of marriage from Harris Bigg-Wither, following her thoughts into the morning when she changes her mind. This is one of my favorite stories in the collection, and I wish most were in a similar vein.

The forth story was quite whimsical. In The Delaford Ladies' Detective Agency, Elizabeth Hopkinson casts a mature Elinor Ferrars in the role of local sleuth, whose skills are required when a house party at Delaford is thrown into fear by a phantom embroiderer, covertly working on the ladies' sewing projects in the night.

The eighth story is called Miss Austen Victorious by Esther Bellamy. While I found it, quite frankly, a bit weird, it's nevertheless an enjoyable tale that transplants Mrs. Bennet to WWII England, where she is ironically engaged in directing a dramatization of Pride and Prejudice.

Number nine is another of my favorites: Cleverclogs by Hilary Spiers. It is the story of a young bookworm who forges a special bond with her grandmother through Austen's novels. I could deeply relate to this story and consider it one of the few masterpieces in the collection.

I really enjoyed what Kelly Brendel did with the the twelfth story, Somewhere, in which she tells the story of the Mansfield theatrics from Mrs. Grant's perspective. She demonstrates great empathy for this often overlooked character.

One Character in Search of her Love Story Role by Felicity Cowie is the sixteenth story, an amusing meta analysis of the continuity in character types. It forges an interesting relationship between Jane Bennet and Jane Eyre that is sure to entertain.

Story nineteen is entitled We Need to Talk About Mr. Collins, by Mary Howell. It is a terribly depressing story about a modern Charlotte enjoying her regular appointment with her hairdresser, Eliza, that does much to boost sympathy for Miss Lucas' famously unromantic perspective of marriage.

O.K. Despite my best intentions, I cannot help myself but include one rant. The story that infuriated me more than any other was number fifteen, The Jane Austen Hen Weekend by Clair Humphries. All I will allow myself to say is that I would hope any intelligent woman, let alone four, would know to turn off the water on an overflowing toilet rather than let it run all over a historical home. I'll say no more on the subject.

Has anyone else read this book and felt similarly disappointed? I'd like to hear what others think. In the meantime, if you are looking for a truly satisfying collection of Austen-based short stories, I highly recommend pursuing Jane Greensmith's Intimations of Austen (read my review here) instead.
Posted by Alexa Adams at 9:00 AM