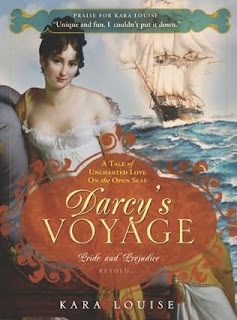 I really love Kara Louise's books. I've read several, but for some reason never purchased a copy of Pemberley's Promise, her retelling of Pride and Prejudice set on the high seas. The notion just didn't appeal to me very much, seeming rather far fetched, but I always assumed I would eventually read it. So when Sourcebooks asked if I would review Darcy's Voyage, the title with which they have rebranded Pemberley's Promise for mass publication, I was ecstatic. I received my very first advance copy with glee and really tried to wait to read it until the time to post my review drew near, but self control was never my strong suit. When September finally did roll around, most of the story was clouded by all the other Pride and Prejudice variations I have read since completing Darcy's Voyage. A reread was imperative and, I am pleased to say, the book was just as enjoyable on the second go round as on the first.

Elizabeth Bennet embarks for the United States to visit her Aunt and Uncle Gardiner, who are temporarily living there for business reasons. Fitzwilliam Darcy is traveling on the same ship (his own), off to collect Georgiana, who traveled to New York with Mrs. Annesley to attend the birth of the latter's first grandchild. Though there are no balls and dinner parties, the early interactions between Elizabeth and Darcy mirror the events of Pride and Prejudice. For example, this rather familiar conversation:


"Do not worry yourself, Captain. I have only seen meagrely tolerable women on this ship; certainly none handsome enough to tempt me in the least."


The captain laughed. "Darcy, you have not changed one bit in the years I have known you. You and your impeccable, fastidious nature. I have seen several whom I would regard as quite pretty."


"I have no intention on this voyage to give consequence to ladies who have been unable to secure a husband for themselves in England and who are determined to find one aboard this sailing vessel even before arriving in America. it is apparent to me that the ladies on this ship, for the most part, have little beauty and no breeding at all. Most are decidedly beneath my station."

Of course, his very prejudiced opinion was overheard. At the Meryton Assembly or on the deck of a ship, Elizabeth and Darcy get off on the wrong foot. Though the unusual intimacy afforded by weeks at sea (including a horrifying but fascinating storm) allow them to recognize their feelings for each other much sooner than they do in Pride and Prejudice, once they leave the ship our hero and heroine are in very much the same place that Austen leaves them at the Hunsford parsonage: divided by misunderstanding. In the process of bringing them back together, Ms. Louise turns the events of Pride and Prejudice completely on their head, allowing all the familiar episodes to unfold in reverse order. The result is a remarkable treat for Austen fans, allowing us to relive our favorite moments from a thoroughly fresh perspective.

I did, as feared each time I chose not read Pemberley's Promise, find that the premise required a bit of a mental leap. No matter how much I enjoyed everything else about the story, I still can't quite wrap my mind around the notion of Elizabeth traveling steerage and alone. Her place there is absolutely essential for the plot to function, but the unlikelihood of her family agreeing to her traveling in such a matter, especially for no more urgent reason than a vacation, continues to irritate me. Upon return to England, the interpretation that unfriendly parties (namely Caroline Bingley) place upon such unusual travel arrangements helped to assuage my chagrin, but still I wish there was a way of setting up the story without subjecting Elizabeth to such precarious conditions.

The beauty of Austen variations and "What if?" JAFF is how twists in events elucidate the emotions of characters we love, like in this scene at Netherfield:


"Why...I would have to object, Miss Bingley!" Elizabeth protested.


Darcy looked to Elizabeth, recognizing the look of anger and insult written across her face, coupled with a very determined look of wishing to speak her mind. She continued, "We may not have all the advantagesone has in town, but we certainly have opportunities that we may take advantage of to improve ourselves."


"Perhaps it would not be the norm," Darcy interjected, "but I do believe one could easily find an unblemished pearl - or two - in a country neighborhood such as this, if one knew where to look and what exactly he was looking for."


Elizabeth's anger was somewhat appeased by Darcy's words. He had, at least, stood up for her, and for that she was grateful. If he had remained silent, she could only suppose he agreed with Miss Bingley, and she did not think she could bear that.

I love how Elizabeth's insecurities remain precisely what they were in the original story, only intensified by her greater emotional involvement in Darcy. It's moments like this that lead me to assert that fan fiction, at its best, is one of the most relevant and direct forms of literary criticism. All of Ms. Louise's novels excel in this area, and I do hope that Darcy's Voyage will be followed by more of her other novels being released by Sourcebooks. My very favorite is Master Under Good Regulation, the story of Pride and Prejudice told from the perspective of Mr. Darcy's dog.
Posted by Alexa Adams at 2:00 PM