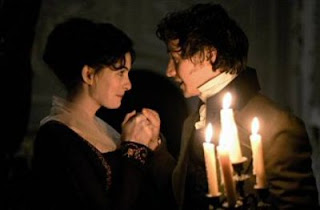 So maybe I'm really stretching it on this one, but tonight is the first night of Hanukkah (it's early occurrence this year is my justification for not having blogged much lately - so busy!), and like the obsessed girl I am, my thoughts stray to Austen. Now I know as well as anyone else that Austen NEVER mentions any Jewish celebration in her novels - in fact, part of my love for her stems from the fact that ,unlike so many other English writers of the 19th century, she pretty much never mentions Jews, or their accompanying stereotypes, at all. The only character of her's vulgar enough to make such utterances is John Thorpe, and by putting such cliches in his mouth, she only emphasizes their inappropriateness (by my interpretation, at least). So where can I find fodder in the Austen cannon for this supremely un-Austen like holiday? Well, it is "The Festival of Lights", and she does incorporate many wonderful images of lights, particularly candlelight and firelight, which seem to me highly appropriate to reminiscence upon on this occasion. So for those of you who celebrate this really rather minor Jewish holiday - given undue importance by its proximity to Christmas (which is a far superior celebration, I assure you) - and those of you who just want to wander through a smattering of slightly related Austen quotations, please enjoy the following selections:


It was now perfectly dark, not a single star was there to direct my steps, and I know not what might have befallen me had I not at length discerned thro' the solemn Gloom that surrounded me a distant light, which as I approached it, I discovered to be the chearfull Blaze of your fire. - Love and Friendship


Their table was superlatively stupid. Scarcely a syllable was uttered that did not relate to the game, except when Mrs. Jenkinson expressed her fears of Miss De Bourgh's being too hot or too cold, or having too much or too little light. - Pride and Prejudice

Too soon did she find herself at the drawing-room door; and after pausing a moment for what she knew would not come, for a courage which the outside of no door had ever supplied to her, she turned the lock in desperation, and the lights of the drawing-room, and all the collected family, were before her. - Mansfield Park


Before the house-maid had lit their fire the next day, or the sun gained any power over a cold, gloomy morning in January, Marianne, only half dressed, was kneeling against one of the window-seats for the sake of all the little light she could command from it, and writing as fast as a continual flow of tears would permit her. - Sense and Sensibility

The side of the quadrangle, in which she supposed the guilty scene to be acting, being, according to her belief, just opposite her own, it struck her that, if judiciously watched, some rays of light from the General's lamp might glimmer through the lower windows, as he passed to the prison of his wife; and, twice before she stepped into bed, she stole gently from her room to the corresponding window in the gallery, to see if it appeared; but all abroad was dark, and it must yet be too early. - Northanger Abbey


In passing along a short gallery to the assembly-room, brilliant in lights before them, they were accosted by a young man in a morning-dress and boots, who was standing in the doorway of a bed-chamber apparently on purpose to see them go by. - The Watsons

"So very obliging of you!--No rain at all. Nothing to signify. I do not care for myself. Quite thick shoes. And Jane declares--Well!--(as soon as she was within the door) Well! This is brilliant indeed!--This is admirable!--Excellently contrived, upon my word. Nothing wanting. Could not have imagined it.--So well lighted up!--Jane, Jane, look!--did you ever see any thing? Oh! Mr. Weston, you must really have had Aladdin's lamp. Good Mrs. Stokes would not know her own room again." - Emma


She was struck, quite struck, when, on returning from her walk and going into the East room again, the first thing which caught her eye was a fire lighted and burning. A fire! it seemed too much; just at that time to be giving her such an indulgence was exciting even painful gratitude. She wondered that Sir Thomas could have leisure to think of such a trifle again; but she soon found, from the voluntary information of the housemaid, who came in to attend it, that so it was to be every day. Sir Thomas had given orders for it. - Mansfield Park

The evening came, the drawing-rooms were lighted up, the company assembled. It was but a card party, it was but a mixture of those who had never met before, and those who met too often; a commonplace business, too numerous for intimacy, too small for variety; but Anne had never found an evening shorter. Glowing and lovely in sensibility and happiness, and more generally admired than she thought about or cared for, she had cheerful or forbearing feelings for every creature around her.- Persuasion


"My dear, you are too particular," said her husband. "What does all that signify? You will see nothing of it by candlelight. It will be as clean as Randalls by candlelight. We never see any thing of it on our club-nights." - Emma

I would now take a moment to reflect on the blessings of modern electricity, but this last observance of Mr. Weston's makes me think twice of it. Happy Hanukkah!
Posted by Alexa Adams at 4:25 PM