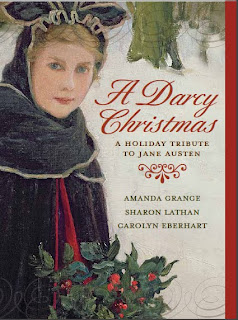 Well, this is about a week late (does that make me $7 short?), but there are crucial shopping days left before Christmas for you to take my recommendation and buy A Darcy Christmas for the Austenite in your life (who might very well be yourself). I thoroughly enjoyed this seasonal read, especially the first story in the collection, Mr. Darcy's Christmas Carol, by newcomer Carolyn Eberhart. Attentive readers will know that I was so inspired by this rewrite of Charles Dickens' classic Christmas tale as to immediately turn around and try my hand at a similar treatment of O. Henry's The Gift of the Magi (read The Darcy's Gift here). I love how Miss Eberhart took this oh so familiar story and transplanted it upon Mr. Darcy's even more familiar (to me, at least) conflict over the unsuitability of Elizabeth Bennet as a romantic interest. The action depends on a "What If?" style twist, the events of Pride and Prejudice having played out almost precisely except that, upon that fateful walk near Longborn at the end of the story, Darcy fails to propose to Elizabeth.  Three spirits show him the true spirit of the holiday while warning him of the dangers his current prideful path will lead him on, the Ghost of Christmas Yet To Come (in the guise of Lady Catherine, appropriately) predicting a truly harrowing fate. I was particularly pleased with how Miss Eberhart connected her Regency Era story with Dickens' Victorian tale by ending with a glimpse into the future, casting Mr. Gardiner as the gentleman asking for a charitable subscription from Mr. Scrooge. I highly recommend this charming fusion of the work of two of the greatest 19th century writers, and only regret that I didn't think of the notion first.

Next came Amanda Grange's story, Christmas Present, which I must say is the best story I think Miss Grange has ever written, and I have read them all. I often find her books charming, but this tale made me laugh out loud, a thing she has never previously achieved. The story takes place after the marriage of Darcy and Elizabeth. Jane has just given birth to her first child, and Elizabeth is on the verge of following in suit. The entire family gathers at the Bingley's new home for the holiday - the Hursts, Caroline, all the Bennets, and even Lady Catherine and Mr. Collins - providing  ample room for comedy. I must share one of my favorite parts, which occurs while Bingley is sharing with Darcy his fatherly pride:


"Well, what do youthink? Is he not the most handsome baby you have ever seen? Is he not the strongest, the healthiest, the happiest baby it has ever been your pleasure to meet?" he asked as he led Darcy into the drawing-room.


"Very well then! I agree with whatever you say. He is a very fine boy. I can say this in all sincerity: he is lucky to have such a father."


"Do you really think so?" asked Bingley. He beamed whilst looking anxious at the same time. "I was elated when he was born. When I first heard him cry I felt an enormous sense of pride - "


There came a snort from the sofa, where Mr. Hurst, Charles Bingley's brother-in-law, was lying, apparently asleep.


"Ah, yes, " said Bingley, momentarily diverted. "My family are here. Caroline arrived a month ago to run the household whilst Jane was indisposed, and Louisa arrived with her husband last week. My brother-in-law, as you see, resting."


Darcy raised one eyebrow. Mr. Hurst spent most of his life on the sofa and Bingley knew, as well as Darcy, that indolence, not the need for rest, was the reason.


The snort resolved itself into words as Mr. Hurst opened one eye.


"Felt an enormous sense of pride?" he asked. "Thought nothing of the sort. As soon as you heard that cry, you said, 'I've killed them!' and strode around the room like a man demented, moaning, 'They're dead. It's all my fault.'"

The final story in the collection is A Darcy Christmas by Sharon Lathan. Though a pleasant tale, the more overt references to the Darcys' sexual appetites that Miss Lathan makes, particularly when compared to the rest of the collection, was a bit off-putting for me. However, in spirit of the holidays, and having already gotten that complaint off my chest, I will dwell instead on the story's strengths. I loved the structure: each chapter a vignette portraying a different Christmas over the years of the Darcys' marriage. Like life, not all is blissful happiness, but it was highly endearing to be able to follow our beloved couple as they created a family and established Christmas traditions. If you have not yet surmised so much, I found the entire book to be a festive tribute to the spirit of the season, and will end on the same note I began on, by reminding you that it is not to late to buy a copy for yourself in time to enjoy it for the holiday.
Posted by Alexa Adams at 10:52 PM