The Strange Marriage of Anne de Bourgh by Skylar Burris 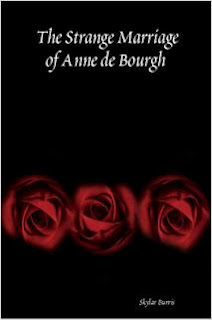 I picked up The Strange Marriage of Anne de Bourgh following my disappointment in Dancing with Mr. Darcy (read my review here), hoping to discover some Austen based short stories that were more to my liking. It was a very satisfying decision. Apparently, the three stories in the collection were originally part of Ms. Burris' novel An Unlikely Missionary, as she explains in the introduction (published in 2005):


Currently, I am revising An Unlikely Missionary, a novel that shines a spotlight on one of Austen's lesser characters, the practical Charlotte Collins. As part of that revision process, I have removed a number of subplots from the novel, and I am rewriting it with a more consistent focus. Yet the subplots were entertaining, and I hate to see them discarded altogether. Consequently, I have revised them into stand-alone short stories, and you will find three of them here.

The first and longest story, The Strange Marriage of Anne de Bourgh, focuses on the Darcy's reunion with Lady Catherine and her newly acquired rector, one Mr. Jonson, who bears little resemblance to his predecessor, Mr. Collins. Charming and handsome, he might be considered a vast improvement, were he not also avaricious and worldly. Upon meeting him, Mr. Darcy is concerned that his aunt is stepping beyond the bounds of propriety in her relationship with him, encouraging a familiarity he finds very troublesome, but what he does not realize is that Mr. Jonson's real target is Anne. The story, like so many others involving Anne, creates the appearance that she will act foolishly in her desire to escape her mother's tyranny, but there is a surprise in store for presumptuous readers (whom I count myself amongst). I was thoroughly delighted with how the events of this sweet tale concluded.

The second story, A Battle of Wits, is written in the epistoalry style, chronicling the letters exchanged between Elizabeth and Darcy while the latter is in town on business. Have I used the word delightful already in this post? Well, I must employ it again, for no other word so properly captures my feelings regarding this tale. The focus is on the couple's ability to challenge each other intellectually (as the title implies), and it is precisely the kind of exchange one expects from these beloved characters. I was particularly charmed by Darcy's parody of a Shakespearean sonnet:


My Lizzy's eyes are nothing less than fine;
They shimmer with a sort of suspect gleam.
And though she's independant, still she's mine,
But there are times I fear it's all a dream.
If that is so, then pray, love, let me sleep
The slumber of the never-waking dead,
For if that vision withers I will weep
Alone inside the prison of my bed.
But if you come to me and hear my heart,
As it beats firmly by your yeilding side,
And promise me that you will never part,
Then you will be the object of my pride.
I was a selfish being all my life,
Until the day you deigned to be my wife.

Any one else feel inspired to write their own Pride and Prejudice sonnets? If so, I might be willing to share the terrible one I wrote after reading this story.

The final and shortest tale is entitled Mr. Darcy's Homecoming, and it chronologically follows A Battle of Wits (arguably, neither are truly stand alone). This one was the least to my liking, because what can one expect the married Darcys to do upon reuniting than to race off to the bed room? Though it is far from lewd, I was still a bit uncomfortable with the content, but I imagine that most readers would find it a touching story of marital bliss.

As I began this post by referencing Dancing with Mr. Darcy, I will finish on the same topic. My biggest complaint with several of the stories in that collection is that the writers seemed to strive to reject pure fanfiction in favor of more "literary" endeavors, resulting in rather contrived memoir-esque ramblings. This offended me. Coming out of that experience, I was delighted to read the following conclusion to Ms. Burris' introduction:


The novel was once considered a low-brow genre, and any respectable writer wished to be known for his or her poetry. Fanfiction now bears the same stigma the novel once endured. Will it, too, one day emerge as a respected and major form?

I certainly hope so! Some of the best pieces of writing I have encountered in recent years have been works of fanfiction. Sampling is perfectly acceptable and respected in the music industry. Film is constantly rehashing old tales. I believe we are not far away from the day when fanfiction will also receive its proper due.
Posted by Alexa Adams at 12:40 PM