Charades as Bawdy as Limericks: Reading Austen with my Daughter

This past Saturday, I spontaneously decided to read Austen's The History of England from the reign of Henry the 4th to the death of Charles the 1st to my daughter for the first time (you can access the original manuscript at the British Library's online gallery). She has been very interested in Tudors and Stuarts recently, largely thanks to Horrible Histories and the musical Six, and so the time just seemed right. She laughed at it, which pleased me to no end, and I think this might be the first time she has really appreciated an Austen text. But it had been a while since I last read it, and I had sort of forgotten about the short "sharade" towards the end:

My first is what my second was to King James the 1st, and you tread on my whole.

On the surface, tis no great mystery that the answer is carpet, for Austen provides it before the actual riddle. She further elaborates afterward, explaining it as a reference to Robert Car, 1st Earl of Somerset, a great favorite of James I. But this is a bit weird for Austen, who normally is reluctant to spell such things out for her readers. She only provides an answer to one of the much more frequently referenced and dissected charades in Emma, but that is an original composition and an intentional narrative device, vital to both Emma and Harriet's subsequent misunderstandings. So here I am, reading this aloud to my daughter, caught unawares and suddenly blushing at this seemingly innocent charade, while my mind is running back to a blog post read many years ago at the always provocative Sharp Elves Society, which argues very convincingly that young Miss Austen was making a very bawdy joke, indeed. I have no wish to dissect the theory, which depends on the novel Fanny Hill and is really not my turf (more blushes), but it caused me to reflect on the subversive nature charades play in literature, and how they are often used to disguise pretty overt sexual references and tensions. This is true of the infamous charade scenes in both Jane Eyre and Vanity Fair, and it is also true in Austen.
In Emma, there is a hint of a very famous charade by David Garrick, published in the London Chronicle in 1771. Mr. Woodhouse struggles to recall it, but Austen's contemporary readers would have known it. I am no expert in back alley slang from the 18th century, but many with greater knowledge of this subject have elaborated on the incredibly bawdy nature of the complete poem. Here is one of the complete variations (there are a few):
Kitty, a fair, but frozen maid,
Kindled a flame I still deplore;
The hood-wink'd boy I call'd in aid,
Much of his near approach afraid,
So fatal to my suit before.
At length, propitious to my pray'r,
The little urchin came;
At once he sought the midway air,
And soon he clear'd, with dextrous care,
The bitter relicks of my flame.
To Kitty, Fanny now succeeds,
She kindles slow, but lasting fires:
With care my appetite she feeds;
Each day some willing victim bleeds,
To satisfy my strange desires.
Say, by what title, or what name,
Must I this youth address?
Cupid and he are not the same,
Tho' both can raise, or quench a flame --
I'll kiss you, if you guess.
The answer is, jokingly, chimneysweep, but the charade is about syphilis and the contemporary belief that it could be cured through sex with virgins. Yeah. Think on that for a second. I know it's heavy. Now what does it mean that Mr. Woodhouse, of all people, is the source of this "elegant extract?'
I've read a lot of proposed answers to that question over the years, from Austen not knowing what she was talking about (yeah, right), to syphilis actually being the ailment from which Mr. Woodhouse is himself suffering. A fascinating argument, but I don't subscribe to it. He is presented, after all, as a man of quite delicate sensibilities, and I find it hard to believe that he would in anyway intentionally reference this incredibly ungenteel topic before his unmarried daughter and her friend, let alone make this association:

"I wish I could recollect more of it.

Kitty, a fair but frozen maid.

The name makes me think of poor Isabella; for she was very near being christened Catherine after her grandmama. I hope we shall have her here next week. Have you thought, my dear, where you shall put her—and what room there will be for the children?"

He cannot be knowingly comparing his daughter to a prostitute. My belief is that Austen is using the charade to both mock Mr. Woodhouse's complete cluelessness and emphasize his inadequacies as a patriarch. The sexual content in intentional. It acts as a warning. He is utterly incapable of guiding Emma through the difficult rituals of courtship, even if he had any mind to do so, yet he is the only one legally authorized to act in such a capacity. Both Mr. Knightley and his brother might take it upon themselves to warn Emma regarding Elton, but she is in no way obligated to act on their opinions. Granted, she's pretty adept at overriding her father's dictates, particularly when it comes to feeding guests at Hartfield, but had Mr. Woodhouse said something about an inappropriate level of intimacy developing between herself and Mr. Elton, Emma must have at least reflected upon his warning. But he sees no danger. He doesn't even know of it when it comes. He is even so deluded as to lament his daughter's eventual union to Mr. Knightley, her most obvious and in every worldly way desirable match. This is a patriarchy turned upside down. Emma is the head of the household in all but name. Contemporary readers would know the literary reference and see the potential danger ahead, even while laughing. You know, like: 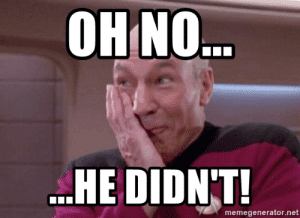 It is no accident that Austen uses charades to obscure Emma's romantic miscalculations. She lived in a society adept at deciphering such codes. In so many ways, this is her invitation to the reader to be thinking of the novel like a puzzle, to not take everything at face value, and to begin to solve the mystery at the heart of her narrative. Not all is what it appears. Not these innocent parlour games, nor the respectable Miss Austen, herself.
Anyway, to return briefly to The History of England, I found myself reading the charade and hesitating to explain the meaning. Lazily, I considered just glazing over it, but I thought better of it and explained to Eliza that James I is widely believed to have had a series of longterm male lovers, even while he enacted stringent anti-sodomy laws. I may not be ready to elaborate on the Fanny Hill theory to her quite yet, but no way is my daughter going to grow up under the false impression that Jane Austen was some prim and proper Victorian creation who knew not of such things. The Kitty charade I will explain when she is older. Much older. It's way too dark and disturbing, and I do not think it wise to distress her with such tales of abuse. Fortunately, the novel doesn't suffer greatly from not understanding this reference, though our understanding of who Jane Austen was does. We'll have this conversation. Someday.
Posted by Alexa Adams at 6:00 AM