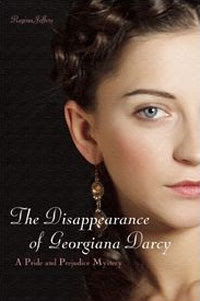 Longtime readers of this blog will know the great love I have for Regina Jeffers books.  The Disappearance of Georgiana Darcy is, in many way emblematic of her work, combining vivid scenery and historic detail to bring the world of Austen's characters intensely alive, as in this passage:


He wove his way through yet another overflowing berm before he entered the narrow valley below the rocky ledge. A marshy moor flanked by thick heather awaited him, and Wickham urged his horse cautiously forward. "Easy," he said calmly. although he felt anything but calm. He wanted to be free of the constant downpour. He wanted dry clothes. He wanted to escape Scotland, his past, and Darcy's revenge.

The horse stepped gingerly. A sucking noise following each release of its hoofs. "Not much farther," he said as he stroked the animal's mane, while encouraging it forward with his knees. "There is bound to be a lean-to."

One step. Then two. Step by step closer to a few minutes of dry shelter and the opportunity to weigh his options. Where to go next? What to do about Lydia? How to avoid Darcy's retribution? All his choices remained out of reach - nearly as elusive as the cottage's shelter.

Tantalizing, isn't it? The entire book is seductive - I can think of no better word to use - carrying the reader irresistibly forward through its plot, but the terrain covered is sinister in the extreme. Thank goodness the main characters are not implicated in the dark world Ms. Jeffers creates, complete with pretty much everything licentious. Welcome to Normanna Hall. Delving into Scottish lore, the reader is lead through a twisted tale of intrigue:


Domhnall bit back his retort. Somehow, his uncle had weaseled his way into a welcomed position with the MacBethan household. Domhnall wondered what his Uncle McCullough knew of his mother's "madness" - of the way she had sent them all on a ticket straight to Hell. "Tell me, Uncle," he said through gritted teeth, "when was my father's edict regardig your presence at Normana rescinded?"

"It be no longer Coll's house," his mother interceded.

"No, it is mine, and I am my father's child," Domhnall growled. "I may be the product of my father's lying early on with a bastard's daughter, but I do not need to be reminded of my lineage by my mother's equally ruined family."

I have been noticing an increasingly sinister strain in Ms. Jeffers works. I did not review her last book I read, The Scandal of Lady Eleanor, because I was unsure how to deal with the deviant sexuality which forms a foundation for the plot. At the time, I excused myself on the grounds that the book was not Austenesque, but before I read it I had intended to review it anyway. It was an easy out of an awkward situation, but my cowardice only delayed the pain, and now I am in the same situation without an escape clause.

The Disappearance of Georgiana Darcy is a beautifully written book, but I could not enjoy it. I anxiously turned each page, but the content just made me extremely uncomfortable. Others are sure to feel differently, and I encourage those interested in such things to read this book, but I read Austenesque to escape from the constant inundation of violence and horror we are subjected to in our society. This book felt like a terrible news story, the kind that leaves you wishing you could erase the information from your mind.

This book is my second review for the Pride and Prejudice Bicentenary Challenge.
Posted by Alexa Adams at 4:11 PM