Musings on Elizabeth and Darcy, plus Various Announcements 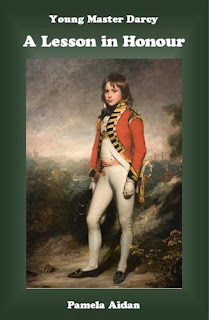 "Manners, Trojan!" Darcy scolded and then assured the man as he pulled open the ponderous sentinels, "Be easy; I sent no word, Jacob. Back by two," he warned. Nodding his thanks, he and Trojan left behind his ancestral lands with the express intention of escaping for a few hours the wrenching grip of sorrow and fear that had taken possession of it.


Once on the road to Lambton, Darcy loosed his restraint and allowed Trojan and himself to release of a good run. The horse's hooves kicked up an appalling amount of slush and mud, spattering him from head to toe, but what did it matter? The sense of abandon, of freedom was exactly what he needed! The cold air set his lungs to burning and his eyes to watering, but it felt marvelous, it felt ... alive!

I begin this musing remembering Pamela Aiden's remarkable portrayal of a young Fitzwilliam Darcy in A Lesson in Honour because I think she got him exactly right. Inside the rigid Mr. Darcy is a free spirit, one caged by responsibility and societal expectation. My most recent reading of Pride and Prejudice (I'm slowly making my way through David M. Shapard's revised and expanded annotated edition - his Annotated Northanger Abbey is due out October 1st! Can't wait!) has emphasized the notion of Elizabeth as a representation of the freedom he yearns for, particularly poignant at this moment:


In Meryton they parted; the two youngest repaired to the lodgings of one of the officers' wives, and Elizabeth continued her walk alone, crossing field after field at a quick pace, jumping over stiles and springing over puddles with impatient activity, and finding herself at last within view of the house, with weary ancles, dirty stockings, and a face glowing with the warmth of exercise. 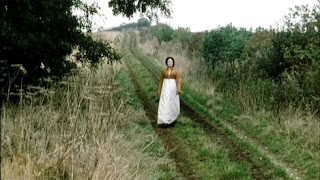 The image of Ms. Aiden's Young Master Darcy (a book I haven't read in more than two years, check out my review here) instantly came to mind when I read these familiar lines. Mr. Darcy is immediately torn by the dueling claims of propriety and his appreciation for the very wildness that Mr. Bingley's sisters later deride:


She was shewn into the breakfast-parlour, where all but Jane were assembled, and where her appearance created a great deal of surprise. -- That she should have walked three miles so early in the day, in such dirty weather, and by herself, was almost incredible to Mrs. Hurst and Miss Bingley; and Elizabeth was convinced that they held her in contempt for it. She was received, however, very politely by them; and in their brother's manners there was something better than politeness; there was good humour and kindness. -- Mr. Darcy said very little, and Mr. Hurst nothing at all. The former was divided between admiration of the brilliancy which exercise had given to her complexion, and doubt as to the occasion's justifying her coming so far alone. The latter was thinking only of his breakfast.

His attraction to Elizabeth has already survived her indecorum in addressing him directly at the Lucas' party, instead of waiting for him, her social superior, to speak first, and when she proves her self to be further exceptional by declining (twice!) his offers to dance, his interest is further piqued. This small post is nothing more than an opportunity for me to bask in the joy of considering Elizabeth as Mr. Darcy longed for liberation, which makes her so much better than even a soulmate. As sure as he rescues her from a life of instability and poverty, she rescues him from the expectations of Lady Catherine and all those (which is to say near everybody) of her ilk. Is it not the measure of a perfect book when, after countless reading, it continues to produce new and unexpected sources of delight?

Now just a few bits of business. I have created a page where the finished version of the first chunk of Holidays at Pemberley may be read (look up, or click here). The book will be released on November 20th! Hurray! I'm so excited to have an actual publication date that I'm really not sure what to do with such priceless information. Action will dawn on me in time.

I also want to tout the upcoming Austen in August event at The Book Rat, one of my favorite annual celebrations of all things Jane. I get to participate a lot this year, and I'm really excited! I believe there will be reviews posted of First Impressions and Second Glances (maybe giveaway copies too?), and Holidays at Pemberley will receive it's first big push (if I get to provide an excerpt it will definitely be from a part not already posted here, so do check it out!). I'm also contributing a post on "Amelia Webster," (see Austen's Juvenilia) and the epistolary format, and I'm making some of my Elegant Extract books of the story for giveaway. Plus there's a Mansfield Park read along happening! I have no certain idea as to what other authors will be participating, but they are all sure to be wonderful, and I wouldn't miss it for the world. The fun starts August 18th!

One last note to everyone who was so kind as to provide feedback on my Jane and Bigley: Something Slightly Unsettling project. I'm removing the survey now as all who responded told me to go for it! This was just the encouragement I needed. Thank you! Look for the story on this blog before Halloween. I plan to release it in parts, just as I posted Emma & Elton, before publishing an ebook version.

Thanks for reading!
Posted by Alexa Adams at 4:06 PM