Amelia Webster at Austen in August, plus an Elegant Extracts Giveaway 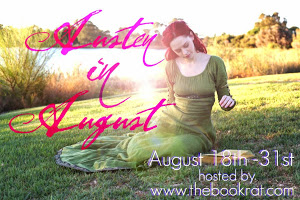 I just returned form five days in Texas with my family last night, and while the trip was lovely, the homecoming has been a series of minor crises. Sometimes its hard to get back into the rhythm of home.

It wasn't helpful that my daughter appropriated my Kindle for the entire trip, and the copy of Mansfield Park that I dutifully downloaded on to it in preparation for the Austen in August (at the thebookrat.com) read along (sign up here) has yet to be opened. Having already read all the magazines American Airlines has to offer, I broke down and bought a book in the Austin airport for the ride home: J. K. Rowling's A Casual Vacancy. It's awesome! I can't put it down. 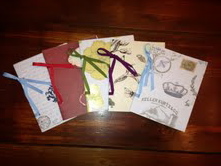 Despite my distractions, Austen in August presses forward, and I'm actually featured there today. I've been making my Elegant Extracts books again, this time featuring a piece of Austen's juvenilia: a short epistolary piece entitled Amelia Webster. In my guest post (read it here), I dig into the short tale, examining it in the context of Austen's development as a writer. I hope you'll read it and enter to win one of three copies up for grabs! 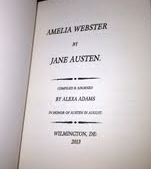 Soon I will dig into Mansfield and post my thoughts on the first volume, but right now the people of Pagford are calling for my attention. They make the residents of Mansfield Park look downright cheery, even Mrs. Norris, but I'm afraid I can't bear to be out of their company right now.
Posted by Alexa Adams at 10:55 AM