My head is currently divided between trying to get the word out on Holidays at Pemberley, or Third Encounters: A Tale of Less Pride & Prejudice Concludes and writing Jane & Bingley: Something Truly Horrid, and it occurred to me that between the two, a few readers might feel I am mistreating such a dear, sweet creature as Miss Bennet. I had the same concerns last year regarding Emma & Elton: Something Truly Horrid, but, as I've said before, Janeites usually have a measure of tolerance for Miss Woodhouse falling on misfortune. Not so for Elizabeth's idyllic sister, whose greatest fault lies in being too kind and never thinking poorly of anyone. 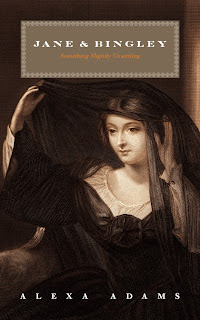 SPOILER ALERTS: No misfortune actually befalls the heroine of Jane & Bingley, but that is not true for the Jane Bennet of Second Glances: A Tale of Less Pride & Prejudice Concludes, who has a miscarriage. The reviews for First Impressions: A Tales of Less Pride & Prejudice frequently called for more conflict, and I tried to respond to that need in a variety of ways in Second Glances, but the only person to suffer anything truly tragic in the course of the book is Jane. Why?

I began Second Glances right after experiencing two miscarriages myself. Both Jane and Elizabeth become pregnant during the book, and in inflicting this same loss on Mrs. Bingley, I was definitely making her more emotionally accessible to myself. Throughout the course of my third and successful pregnancy, I found myself researching not just modern birthing practices, but 18th and 19th century techniques as well. The horrors of the Regency "birthing chamber" gave me much for which to be thankful, but the knowledge would creep into my writing. There was no possible way for me to incorporate these gruesome details into my polite little stories, but they would assert themselves, nevertheless. In Holidays at Pemberley, Lady Catherine references some ...


“For an infant, William has a remarkable number of verbose fans to declare his perfections,” added Elizabeth. “Lady Catherine seems to take all the credit for his safe arrival upon herself. She writes: ‘The well-being of both mother and babe can be attributed in no small part to the sage advice I provided Mrs. Collins throughout her confinement. Had the matter been left in the hands of Mrs. Bennet, there is no guarantee that the outcome would have been so felicitous. She would have the midwife close off the room and build up the fire ...’ Oh my! The remainder of this paragraph is quite unsuitable!” she blushed, as did Georgiana, who had rather more notion than the other young ladies as to what the topic pertained, while Mrs. Gardiner tried not to laugh.

... and Elizabeth herself suffers from infection (puerperal fever) following delivery, a very common occurrence and often fatal. Mrs. Darcy, of course, recovers, but it is an important moment in the book, as it plays a strong role in changing Charlotte Lucas' opinions on love in marriage, the central theme. It also helps reconcile the two sisters, which I left estranged at the end of Second Glances. I hope I haven't given too much away, but felt the need to offer some sort of justification for my actions. Sympathetic readers should understand that I do not seek to make Jane suffer needlessly, for "pictures of perfection" do not make me "sick and wicked." Here's one last excerpt (one last spoiler) which I hope proves my point:


When a carriage entered the grounds of Pemberley not long after Elizabeth’s recovery, Mrs. Reynolds had only three conjectures as to whom it might be – Lady Catherine, Mrs. Bennet, or someone wishing to tour the house and grounds. She fortified herself against the most difficult of these options, determined no one should be admitted, but she lost all her will when a distressed Mrs. Bingley raced through the door demanding, “Is my sister all right? I heard that she is ill.”“Yes, Mrs. Bingley. Mrs. Darcy is quite on her way to recovery. We no longer have any fears on that score.”“Thank goodness!” she cried, almost collapsing into her husband’s waiting arms.“I am sorry to burst in upon you this way,” he explained, “but rumor reached us that Mrs. Darcy was in decline, and we almost instantly departed for Pemberley. It has all been a bit too much excitement for Mrs. Bingley.”“Of course, sir!” exclaimed Mrs. Reynolds, ushering the couple into the nearest parlor and ordering tea. “I’m sure Mr. and Mrs. Darcy will be delighted to see you. We did have our time of concern, to be sure, but Mrs. Darcy is vastly improved.” She paused before adding, “Young Master Frederick is as hale a little lad as ever I saw.”
Jane looked towards the housekeeper with appeal in her eyes, but she said nothing.

“I will get Mrs. Gardiner.”A few minutes later, that lady entered the parlor with Mr. Darcy, who was holding in his arms his new son.Jane rose with eyes for no one but Frederick, and a broad smile swept away any last vestige of her pain. “My little nephew!” she exclaimed softly. “Lizzy’s little boy! Oh, Mr. Darcy! May I hold him?”He laughed. “You certainly may. It is wonderful to see you, Mrs. Bingley. Now our joy is complete.”She looked up from the babe in her arms for just a moment, casting her brother a pained gaze. “Nothing could keep me away when I heard Lizzy was ill. Is she truly recovered?”“Mr. Stevens assures me he has no further concerns, though she is to keep to her bed for the time being. Would you like to bring Freddy to her?”“I might drop him!” she protested. “He is so small!”“You will do nothing of the sort, my dear,” smiled Mrs. Gardiner, “and he is not small, but rather enormous. I will go with you.”