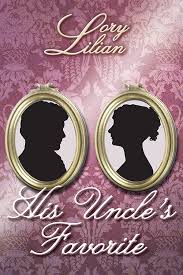 I was so excited to read a new Lory Lilian novel (you can read my reviews of her first two books, Rainy Days and Remembrance of the Past, by clicking on their titles), and His Uncle's Favorite did not disappoint. The book was exactly what I expected: well-written and compelling, but with a bit more sex than I can really tolerate. I have had this reaction to Ms. Lilian's books from the first, and she and I even debated sex in Austenesque early in my blogging career (read "Sexy JAFF: A Conversation with Lory Lilian" here), after I bungled my review of Remembrance of the Past by ranting and raving about Darcy and Elizabeth's need for privacy (it was one of my first reviews, written when I was still working on my own first book, First Impressions, the entire concept for which was founded in a desire to avoid the sex and drama that so often defines this genre, and so the subject was prominent in my thoughts - I have no other excuses for my behavior). Despite my ongoing discomfort with the sexual content in these stories, that does not detract from their being completely captivating Pride and Prejudice variations that draw you in instantly and are terrible difficult to put down.


"I think I have heard you say, that their uncle is an attorney in Meryton.""Yes; and they have another, who lives somewhere near Cheapside.""That is capital," added her sister, and they both laughed heartily. - Pride & Prejudice

I admit to having figured out the broad plot of His Uncle's Favorite during the first chapter (the title is no small hint), but quite frankly, isn't knowing what's going to happen part of the fun of Austenesque? There are still plenty of twists to keep the pages turning, even when I should have been asleep hours before. The premise is that Mr. Gardiner died a few years prior to Pride & Prejudice, leaving Mrs. Gardiner very wealthy and well-connected. In fact, she has friends amongst those whom Miss Bingley and Mrs. Hurst would very much like to insinuate themselves, particularly Darcy's uncle, the Earl of Matlock. When Mrs. Gardiner returns to London following Christmas at Longbourn, she brings not just Jane, but also Elizabeth back home with her for an extended visit. Imagine Mr. Darcy's shock, chagrin, and pleasure in finding Elizabeth an intimate of his inner circle, and his relations daily visitors to Cheapside! You needn't bother; enjoy this marvelous excerpt instead:


Darcy felt the urge for a glass of brandy as he remembered the conversation with his uncle the previous day. The earl allowed him to make a fool of himself when he related his disapproval of the Bennet family. He had not felt so dreadful in a long time. He was tempted to take Georgiana and return home that instant. But did he have the right to ruin everyone's evening by behaving in such a savage manner? And what explanation could he find for an impromptu leaving? Besides, Georgiana seemed to be enjoying herself. She seemed to feel at ease with the Miss Bennets, which was surprising - or was it? Was it surprising that anyone, even a person as shy as his sister, felt at ease with Elizabeth and Jane Bennet? His uncle had met them the day before and liked them instantly, and the earl generally liked few people on such a short acquaintance. On the other hand, it was not a surprise that the colonel was charmed by both of them as he himself declared. But he was not to be taken seriously; he was even worse than Bingley when it came to beautiful, young ladies. Darcy was more cautious in judging people; he did not approve of either sister at first meeting. Miss Bennet used to smile too much. And Miss Elizabeth was not handsome enough to tempt me to dance with her.

Suddenly, his thoughts sounded ridiculous. Surely, those were not the reasons he disapproved of them in the beginning! There must have been other thing to form his poor opinion of them, and the most important was their family's behavior and situation, which could not be forgotten or dismissed. But Miss Bennet does not seem to smile any longer - not at all! And Miss Elizabeth ... He could not think of any lady more handsome - or more tempting.

"Darcy, what on earth are you ding here? Let us return to the ladies; dinner is ready." The earl's voice startled him, and he could not reply before his gleeful uncle continued.
"And I absolutely need your opinion; Which of my sons should marry Miss Elizabeth Bennet, do you think? We could not reach an agreement, and you seem to be the expert on difficult problems of the heart. I shall put her near you during dinner so you can observe her behavior towards both of them and inform me whether you sense any partiality to one or the other. Oh - and do not worry about her family's faults; I dare say her charms are adequate compensation."

His uncle and cousins passed nearby, and he heard their laughter from the dining room; Darcy remained motionless in the hall, staring after them and forgetting to breathe.
All hope for a peaceful evening had vanished. He could only pray that his uncle continued to mock him and that none of his words was taken seriously - except for the fact that he would put Elizabeth near him at the table. Could it be true? Would he spend the entire evening only a few inches from Elizabeth? Miss Elizabeth, of course, he corrected himself; he had been a fool since the first moment he met her, and neither time nor distance had changed that.

I love this concept! Perhaps even better is Caroline Bingley's reaction, but for that you will have to read the book.

The story kept me entirely enrapt for the first 300 pages. About that time, Elizabeth and Darcy are finally married, and afterwards the predominate action takes place in the bedroom. That's when my attention began to waver. There were a few loose ends still needing to be wrapped up, so I persevered, but I admit to being tempted to skip over the most explicit moments, even though Ms. Lilian's depictions are really rather tactfully done, as far as sex scenes go. I'm sure many of Ms. Lilian's fans think these are the very best parts of the book, but I don't like to get that intimate with Austen's characters. To each his own! No matter what your preference, His Uncle's Favorite is a highly compelling romance, even if you do feel the need to skip the most graphic moments. I highly recommend it.

This is my eighth review for The Pride & Prejudice Bicentennial Celebration 2013, hosted by Austenprose. Check out my others below: