Happy New Year! So wonderful to finally be sitting in front of my computer once more and giving some much needed attention to my poor, neglected blog. I truly intended to write posts over the holidays, even setting alarms to remind myself, but once I escaped regular life there was no hope for it. The good news is that I left the blog in a far healthier state than it had been in 2012. Generally, 2013 was the year I finally reclaimed my Jane time post baby. It took me a year and half to learn how to meld my identity as a Janeite with that of a mother, but I think I've finally figured out how to balance it all. I can't but look back on the past year with a great deal of pride. I feel like I've started to really find my own voice as a writer, and my productivity has been tremendous. The downside is that I was totally exhausted when we arrived at my in-laws in Indiana on December 19th, and from that point, through a trip to Texas, and continuing into a most slothful week at home, I barely touched a computer. Now I'm recharged and ready to rev back up. I think. 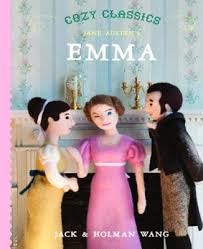 It's FREEZING outside! I laughed when I first heard the term Polar Vortex thrown about - I mean, to
what melodramatic heights will our weathermen not climb? - but my daughter cried as we walked into school this morning, it was so cold. 10 degrees colder to day in Wilmington, DE than Anchorage, AL. Crazy! I convinced my husband to take a car to the train for work, a thing I am almost always encouraging him not to do, but this weather is no joke. Thank goodness it's only one day, and I have a toasty warm house in which to hide from it. My heart goes out to those who don't. May everyone who needs it find shelter today. 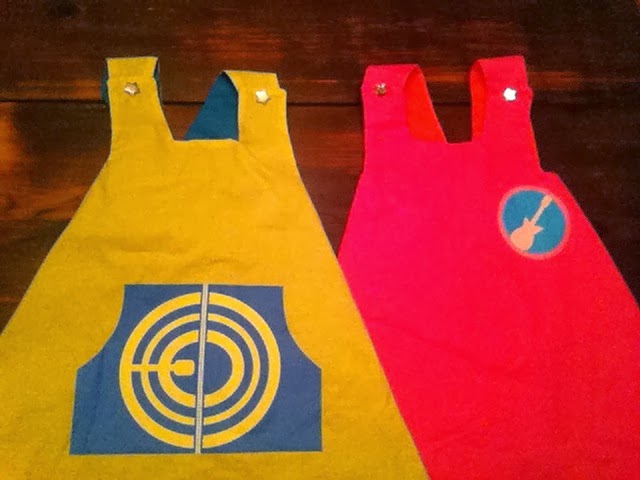 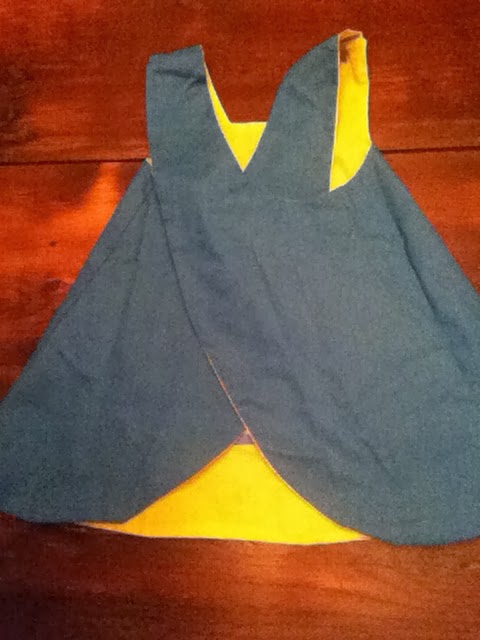 As I said yesterday, "Whatever shall we talk about now the holidays are over? It will have to be the weather, which is very dull, indeed." Unfortunately, my 2 year old can't appreciate my wit, though we're working on it. The Pride & Prejudice play set (which I reviewed here) that she received for Hanukkah looms large amongst the favorite gifts she received. She also got a copy of the Cozy Classics Emma, which will have to be reviewed sooner or later. Another winner was the Fresh Beat Band costumes I made her (she loves them, it's a Nick Jr. show, if you've never heard of it think Glee for the under 7 set). I know these have nothing to do with Austen, but bear with me for a second. I got the idea from this blog post, found through Pinterist, and used a basic pinafore pattern, to make two reversible costumes, one for each member of the band. I got the iron on decals from Nick Jr. It was so easy, extremely cheap (I think I spent $20, mostly on iron-on paper), and one of the most preferred offerings, amongst far too many, that Eliza received. Excuse the wrinkles, for they stand testament to my motherly triumph. At the poor camera quality you are welcome to take offense. 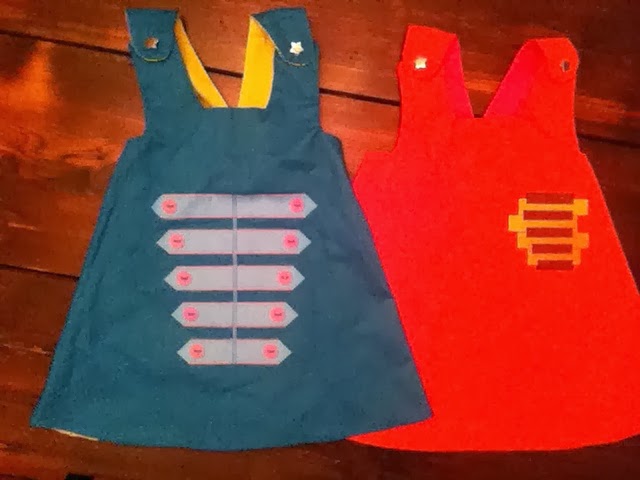 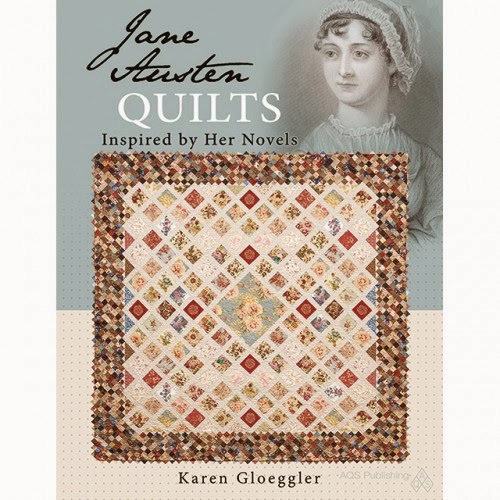 But Eliza was not the only one to make out big this Christmas. I received, to my great surprise, an Austen book I had no notion existed. My quilting mother-in-law found  Jane Austen Quilts Inspired by Her Novels by Karen Gloeggler. The books appears part travelogue, focused on a trip to Chawton to see the quilt Austen made (a pattern to copy her quilt is included), and part sewing manual. More on this come? Perhaps. I think someone is trying to pass on the quilting bug. We'll see if works. Maybe I'll just do a post on the quilt ... 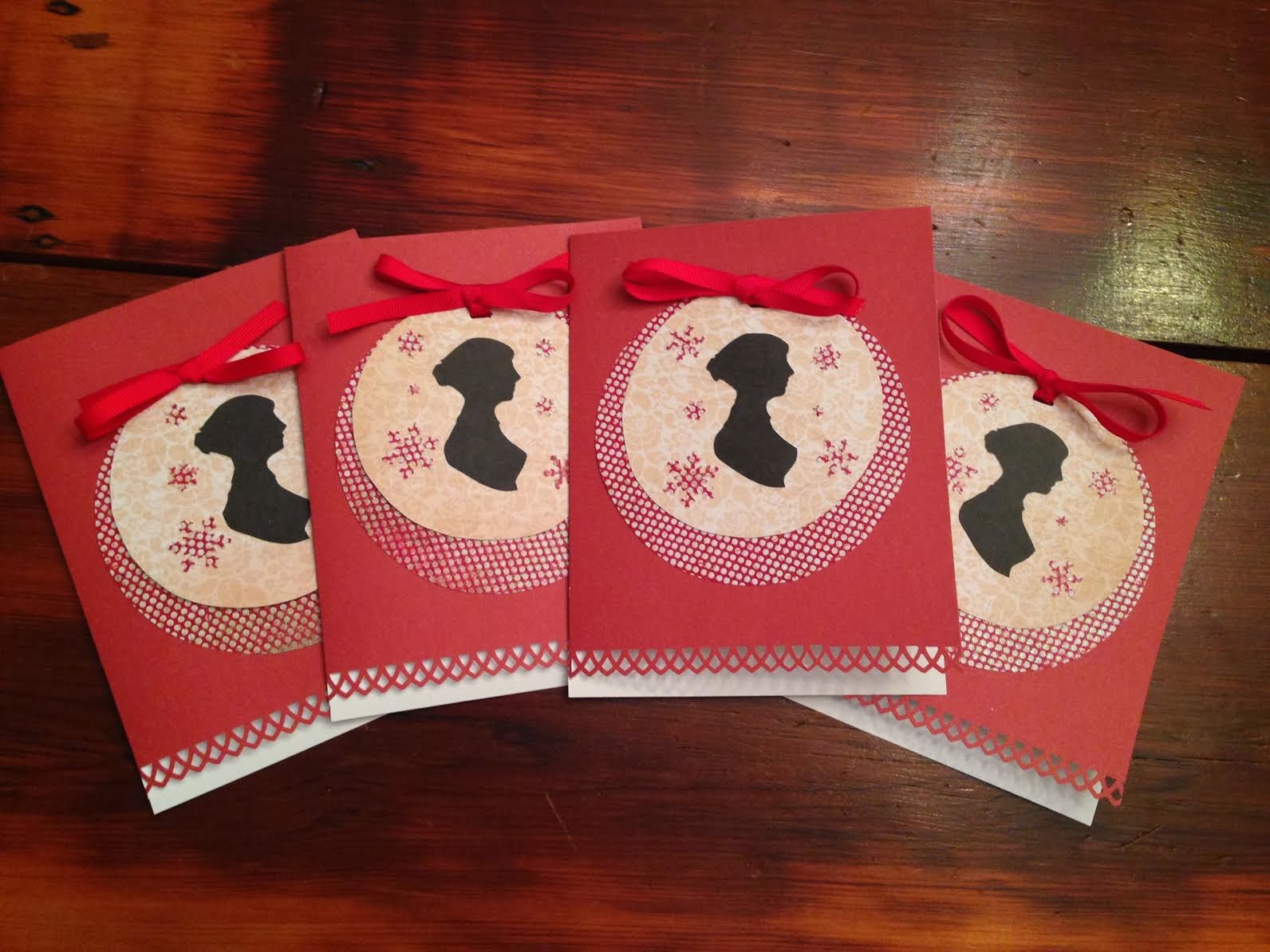 There is some business to which I must attend. Dah, dah, dah, dah, dah dah! The winner of my Jane Austen Christmas Cards is Luthien84! Congratulations! Also, my books received some attention while I was neglecting all and sundry. First, Holidays at Pemberley was reviewed on December 22nd at vvb32 Reads. It was then lauded by Mrs. Darcy herself on the 28th at Laughing with Lizzie. These were precious Christmas gifts, indeed. Thank you, ladies!

The only other item I feel must be shared is my discovery of a contemporary Regency Romance writer who is quite Heyer-esque in feel, if a bit more mystical. I cruised through three of Mary Chase Comstock short novels published, but  of them while traveling. Lots of fun. Probably wont review them, but I had to make a pitch in their favor. Easy reading for the cold nights ahead, and rumor has it she's working on a P&P sequel. I'll have to keep an eye out for that.