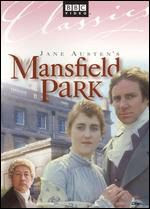 I really do not have time to write this, the move being in full swing, but I have been rewatching my very favorite Mansfield Park film, the 1983 BBC mini-series, while packing and must make a few comments. Of all six BBC adaptations in my Jane Austen box set, Mansfield Park is, in my opinion, the jewel of the collection. Sylvestra Le Touzel is the only actress to have ever portrayed the Fanny Price Jane Austen created, as opposed to some other creature thought up by screen writers. She is a bit robust for Fanny, but plays the part excellently. In fact, the entire cast is fabulous (my feeling on this issue were made apparent when I mashed up Mansfield): from Henry and Mary Crawford, Robert Burbage and Jackie Smith-Wood, to Aunt Norris played by Anna Massey. But far and away, the outstanding performance in this movie is Angela Pleasence's as Lady Bertram. This brief post is dedicated to her.

Almost every time Ms. Pleasence opens her mouth in this film I burst out laughing, even more so now that I have watched it six or seven times than I did at first. She precisely captures the comic in Lady Bertram, which readers are less inclined to recognize in her than in similarly one dimensional characters, like Mr. Woodhouse. All the languid insipidity Austen endowed her with is here portrayed, with a fluttering, high-pitched delivery that perfectly complements each line, almost all directly transposed from the book. Check out this scene from YouTube (sorry, I can't embed it), in which her wide eyed, drowsy bewilderment is simply phenomenal: 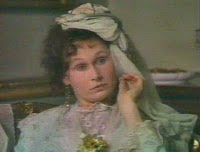 Even if you do not have the patience for British cinematography from the 70's and 80's, I highly recommend this film. Frankly, it is the only version of Mansfield Park that doesn't make me want to throw something at the television screen. It deserves far more comment than I have provided here, and I hope, at some calmer, future time, to write more extensively about it.

So one last, unembeddable clip before I close. It is the ball at Mansfield and, while far from my favorite scene (those cinematography issues I mentioned before being most apparent and the audio dreadful), it contains my favorite line from Lady Bertram - "I sent Chapman to her" - and perfectly illustrates how Ms. Pleasence hones in on and amplifies the comic nature of this role. Enjoy. I'm off to continue packing.

http://www.youtube.com/watch?v=NtdtG5uX7tE
Posted by Alexa Adams at 4:06 AM