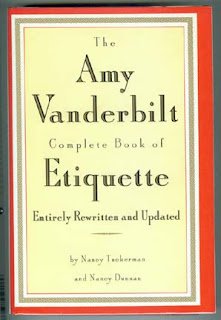 My husband and I find ourselves often consulting the copy of The Amy Vanderbilt Complete Book of Etiquette by Nancy Tuckerman and Nancy Dunnan that his mother gave him upon graduation from high school. It is a bit dated, the 1995 edition we own having last been updated in 1978, but we find it an extremely useful guide when we have questions about how to appropriately proceed. I know we are discussing modern manners, not those of Jane Austen's era, but I have decided to start posting when we consult the book, as I just find it so fascinating. Miss Austen, after all, would want us all to be well-mannered, wouldn't she?

It was all said very gracefully, and the cards with which she had provided herself, the "Miss Elliot at home," were laid on the table, with a courteous, comprehensive smile to all, and one smile and one card more decidedly for Captain Wentworth. - Persuasion

I am beginning to plan out my birth announcement, so I do not have to worry about them after the baby's birth, and in the process I consulted Amy Vanderbilt to learn what the etiquette is regarding this practice. In the process, I came across a section of the book dealing with calling cards. As we Janeites know so well, calling cards were de rigueur in the Regency Era, but they are not commonly encountered in our modern times, so I found this section absolutely fascinating. It begins with a bit of a history of the practice:


Until World War I, "calling" on friends and acquaintances at their residences was an important formal social custom. This duty fell to the woman of the household. If the person she was calling on was not home, she left her husband's calling card with her own on a sterling card tray set on a table in the front hall of every genteel home. Only on certain occasions, such as calls of condolence or congratulations, or calls on the sick, would a man make an appearance and leave his own card in person.

Also known as visiting cards, from the French cartes de visite, personal calling cards with matching envelopes have gone the way of many of life's formalities and are no longer thought of as a social necessity. For the most part they are used only by men and women who can afford the luxury of their distinctive look and by those in diplomatic and military circles.

There are several reasons why calling cards are no longer popular: by tradition they are engraved, an expense which is not within most people's budget; they can no longer be used an invitations since their envelopes are smaller than the minimum post office requirements; we have become less rigid when it comes to conforming to stationary protocol and for the most part have replaced the calling card as a gift enclosure with an informal - which allows for more writing space - or with a store's gift enclosure card. Even though calling cards may not be as popular as they once were, it's doubtful they will never completely disappear. As an enclosure card with flowers or any kind of present, nothing can replace their quality and distinction.

Now as I've mentioned before, this book is rather dated. In the digital age, engraving stationary is not a prohibitive expense, and though Amy Vanderbilt cold not foresee the day, I imagine it is safe to assume that she would be reasonably appalled by the modern practice of online gifts coming with gift receipts, often printed in all capitals on super shoddy paper. Furthermore, I am surprised she does not mention the role telephones must have played in eliminating the need for this style of cumbersome visitation. When a person can just pick up a phone and ask when they might stop by, let alone email, tweet, or use Facebook, why stoop by and leave a card? It's a waste of time and gas. Still, it is a quaint old custom. She goes on to address what the cards look like:


In order to distinguish a calling card from a business card, which it resembles closely in size, it's frequently referred to as a social card. While white is the most popular color for a calling card, you may prefer cream color. Either is correct. Calling cards are always engraved in black ink. A script typeface is traditional and is therefore considered by some the correct lettering style for a calling card. Actually any simple face is correct; what you want to avoid are quaint or ornate letters not in keeping with the formality of the card.


It's up to you whether you have just your name on your calling card or your name and address. If you do include your address, it's engraved in small letters without abbreviations in the lower right-hand corner of your card. If there's any possibility of your moving from where you presently live, you certainly would not want to go to the expense of engraving your address. If you choose not to include your address, you can always handwrite it and/or your telephone number on the card.

The next section deals with writing messages on callling cards:


While you don't have to write a message on your calling card, to do so is certainly more personal. If you are enclosing your card with flowers to the family of a friend who has died, all that's necessary is a brief message handwritten on the face of the card: "With deepest sympathy." The same thing applies when you enclose your card with a present: "With best wishes for your happiness always"; "Have a great graduation party." In the case of close friends, to personalize your card, put a fine diagonal line through your name and sign above it "Love, Helen" or "Jim" as the case may be. For those you don't know well, you can put a line through your title and first name only and write "Helen" above. Write the recipient's name, or name and address, on the front of the envelope. This is important in case the store mislays the card. Unless the message is personal, the envelope is left unsealed.

Now as they were not yet using envelopes for letters, it seems safe to assume, and it also agrees with the way their use is described in Austen, but it does seem very reasonable to assume that members of Regency society did write messages on their cards, as Elizabeth Elliot has done in the passage I quoted at the beginning of this post. Amy Vanderbilt goes on to describe the specific dimensions of calling cards, which are different for men, women, and couples, as well as the specifics of how names should be presented upon the cards.

So what has all this to do with birth announcements? The following passage elucidates:


A nice way to announce the birth of a baby is to attach a small, engraved calling card, bearing the baby's name, to the father and mother's card. Sometimes the baby's card is pink- or blue-bordered and attached to the larger card with a pink or blue ribbon.

I have to wonder what Amy Vanderbilt would have to say about the modern practice of sending a picture card. I have absolutely no notion if he would think it "a nice way to announce the birth of a baby" or totally tacky. Your thoughts?
Posted by Alexa Adams at 9:18 PM