I really meant to get a post up earlier this week, but it literally took me two days to get my head back on straight following my family's travels. It was intended to be a whirlwind trip to Texas, but the experience was further complicated by my father's home being burglarized while I was visiting. My daughter, husband, and I entered the house, thus scaring the intruders away before they moved beyond ransacking the master bedroom. I'm feeling extremely thankful that we didn't experience a direct confrontation. It was all very scary. 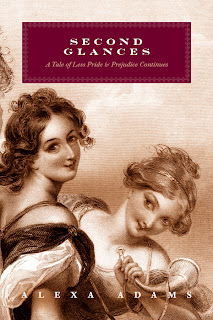 On a brighter note, I had a guest post featured on Austenesque Reviews yesterday! There is an accompanying giveaway of Second Glances: A Tale of Less Pride and Prejudice Continues, as well as something rather experimental. The second volume of Elegant Extracts will be a compilation of Pride and Prejudice quotes suggested in the comments on that post. Three copies of this interactive, paper arts projects are available. One will go to the winner of Second Glances, and two runners up will receive the others. Don't miss out on this extremely unique opportunity! http://janeaustenreviews.blogspot.com/2013/04/guest-post-giveaway-with-author-alexa.html 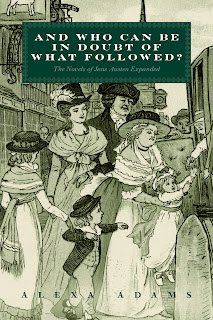 I am have a few reviews that I am delinquent in posting. I read Mr. Darcy's Little Sister by C. Allyn Pierson early in March, but have yet to record my thoughts. I also intend to do a post on juvenile Jane Austen adaptations, which I have been exploring with my daughter, and I should have that written in the next week or two. Finally, I recently discovered $3.00 copies of Northanger Abbey at Target, along with some other fundamental yet overlooked classics, which I want to share with you. If I can get these complete this month, along with wrapping up and publishing "And Who Can Be In Doubt Of What Followed?" (formerly known as Janeicillin), I will
attain a new level of bliss.

One last thing: for those of you (if any of you actually exist) who have been following my Mixed-Up Mashup, I apologize for letting the project drop just when reaching a climax. Two factors played into my abandonment of the tale: first, it just got too egocentric for me to tolerate, and second, I have new (and more complex) plans for the concept. I originally pursued the idea as a means of rejuvenating this blog after the baby hiatus, and I believe, in that sense, it was incredibly successful. However, now that I am in full on writing and editing mode of both "And Who Can Be In Doubt Of What Followed?" and Holidays at Pemberley: A Tale of Less Pride and Prejudice Concludes, I just can't keep up with it. Please forgive this lapse and accept my assurance that the concept has not died, just been reborn. Stay tuned for more.

Labels: And Who Can Be In Doubt Of What Followed?, announcements, Giveaway, Pemberley Holidays, Second Glances