The Works of Charlotte Lennox - Part 1 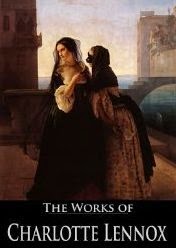 I bought this kindle edition of Charlotte Lennox's works for $1.99 mid-summer, and I just finally finished it. I believe the only major works missing are Henrietta and Hermione, which I might have to go read in the name of thoroughness, but quite frankly, I need a break from Mrs. Lennox. More on why below. Reviewing in no particular order, this post will cover her last novel, Euphemia, and her first, The Life of Harriot Stuart.  Part Two will focus entirely on The Female Quixote, her most famous work. Part Three will tackle the two plays, Philander: A Dramatic Pastoral and The Sister: A Comedy along with the novel Sophia.

Euphemia is the first book in the collection and by far my favorite. It is the only example of an epistolary novel, and I also think it is the work of Lennox's that most resembles Jane Austen's. Were I in the position to be writing a dissertation, I might easily compose one arguing that Sense & Sensibility was directly influenced by Euphemia, which was published just a few years before Austen penned the epistolary Elinor and Marianne: the blueprint for her first published novel. The two female correspondents in Lennox's story are called Euphenia Neville and Maria Harley (Elinor & Marinaane?). They are not sisters but devoted friends, bound to separate as Euphemia prepares to journey to the American colonies for her husband's appointment as the commanding officer of a fort in Albany. This mirrors Lennox' real-life experiences, as her father was lieutenant-governor of New York in her youth. Euphemia's adventures dominate the second half of the novel, while Maria's more domestic exploits comprise the the first. Personally, I found the American part of the tale far more interesting, but it is the first - Maria's tale - where inspiration for Austen may be detected.

Maria is an orphan raised by her uncle, Sir John, upon whom her expectations are based and with whom she shares a devoted relationship. Her fortunes alter when he remarries a calculating woman, jealous of her husband's affection for his niece. Conveniently, she dies early in the tale, and with her demise her schemes against Maria evaporate, but more adventures await the heroine as she navigates the waters of drawing-room courtships.

I won't elaborate on all the many twist and turns that comprise the journeys of the two ladies, for they are many and not always terribly diverting, instead focusing on the thematic elements of this story that, I imagine, influenced Austen. First and foremost is the commentary on the "Cult of Sensibility" (see my review of The Annotated Sense and Sensibility if you are not familiar with this term), which plays a pretty obvious role in both. Something Lennox never lacks is sensibility.

Like Austen, Lennox presents the arguments for and against both sense and sensibility, but while Austen comes ultimately comes down on the side of sense, Lennox (an apt representative of her era) is all sensibility.  The voice of sense in Euphemia, is presented by Mr. Greville, Sir John's closest friend and advisor. He condemns Sir John for sensibility so extreme it endangers his life, as Maria writes:


Mr. Greville utterly condemns his too great sensibility on this occasion. The best virtues, he told him, when in excess, partake so much of vice, that even the extreme right is no better than extreme wrong.

Good Janeite that I am, as soon as Mr. Greville steps into the story I wished he would prove the hero. He is a model for Mr. Knightley: frank, quick to criticize, taking an interested and advisory role in Maria's affairs (I know we're jumping Austen novels here, but the archetype recurs in Lennox's other works, and Mr. Knightley more than any other hero resembles her portrayals). But Euphemia, who generally represents the less-sensible, more-sensical perspective of the two heroines, rejects Mr. Greville's opinions, preferring instead that of Sir John's heir: the far more gallant and impractical Mr. Harley (who is the actual hero).


Sir John Harley's character rises greatly upon me in your agreeable narrative - he has acted both a just and generous part. You have painted him with great force; I see him in all the turns and changes of his temper, and in every view he is pleasing. Your gay philosopher, your lively, yet sententious Mr. Greville, was in my opinion much to blame, when he placed the most amiable virtue of the mind in the number of its maladies and infirmities. Sir John's sensibility is certainly very great; and if it be necessary, as some have said, that limits and bounds should be set in all cases, they cannot be unfit in acts of acknowledgement. If there be a fault opposite to ingratitude, he has fallen into it; and thus, by the excess, he has avoided the defect; but the defect is so horrid, and the excess so beautiful, that he must be a rigid moralist indeed who calls it an infirmity.

This convoluted style of rationalizing even the most destructive displays sensibility is typical of Lennox's work, and even when mocking it, she seems to equally embrace it. Yet by the end of the book, one woman in New York is tried to a degree of despair far more poignant than Marianne Dashwood imposes on herself, and the sentiments expressed by both authoresses upon the recovery of their respective ladies are remarkably similar. From Mrs. Lennox:


When I found a calm and steady resignation take the place of that poignant anguish which I had so long filled her heart; When I saw her return to her usual employments, if not with equal vivacity yet with an sir serene and composed ... then my hopes of her returning peace were confirmed. I congratulated her upon a change, so ardently desired by her friends, so salutary for herself.


To Elinor, the observation of the latter was particularly grateful. She, who had seen her week after week so constantly suffering, oppressed by anguish of heart which she had neither courage to speak of, nor fortitude to conceal, now saw with a joy, which no other could equally share, an apparent composure of mind, which, in being the result as she trusted of serious reflection, must eventually lead her to contentment and cheerfulness.

One comes down upon the side of indulging grief while the other is all for restraint and self-command, and still they pretty much end up at the same place (but that Euphemia has little resembling a happy ending). Other themes are similarly explored/echoed/argued in both books. Lennox holds up one young ladies behavior as the ideal:


It is the opinion of [Clara Bellenden's] family, and her friends, that her heart has received a deep, impression in favour of Mr. Euston; but this circumstance, which her modesty and reserve have concealed from herself; no one would be indelicate enough to hint to her.

Both of Austen's heroine's are too fully realized to deny their own feelings to such a degree, but while Elinor is cautious in acknowledging her feelings, Marianne exposes herself too much:


Elinor could not be surprised at their attachment. She only wished that it were less openly shewn; and once or twice did venture to suggest the propriety of some self-command to Marianne. But Marianne abhorred all concealment where no real disgrace could attend unreserve; and to aim at the restraint of sentiments which were not in themselves illaudable, appeared to her not merely an unnecessary effort, but a disgraceful subjection of reason to common-place and mistaken notions. Willoughby thought the same; and their behaviour at all times, was an illustration of their opinions.

Said behavior echoes a sentiment Austen expresses in Pride & Prejudice through Elizabeth Bennet, "Is not general incivility the very essence of love?", potentially originally derived from Lennox's, "he is at leisure to attend to all the little complaisances and assiduities, which a polite man pays to every female in company, but which a lover confines to one." As we continue through Lennox's works, we'll encounter more examples of potential heroic inspiration. The female characters, except in the case of Maria, Euphemia, and Catherine Morland, have little in common. Case in point: Lennox's first novel, The Adventures of Harriot Stewart.

It makes sense to canvass Harriot's trials next to Euphemia's, as many instances in both books are remarkably similar, but I am afraid I have much less to say of this convoluted tale. Harriot, like Euphemia, moves to New York due to an appointment of her father's. Here we can find more echoes of Sense and Sensibility, as it is Mr. Stuart's intention to regain his fortunes but, like Mr. Dashwood, he dies too soon to accomplish anything, leaving his wife and children quite poor and homeless. This too was Mrs. Lennox's experience, and like Harriot she was sent home to be companion to a wealthy aunt who was discovered to be deranged upon arrival. Bad luck, no doubt, but long before this mishap is encountered, Harriot has been abducted multiple times, including by pirates, and is consistently forced to take epically romantic lengths to preserve her chastity and honor. In this she is little like the far more pragmatic Euphemia, who is a) not so witty as to awe society with her intellect and grace, b) not so beautiful as to inspire all men to fall hopelessly in love with her, and c) not so coquettish as to consistently bring about her own troubles. Harriot much more closely resembles Lennox's next and most famous heroine, the ridiculous Arabella, The Female Quixote. It seems safe to assume the author is similarly laughing at Harriot's foibles, but the countless abductions and crises (she is even held prisoner by the prioress of an Abbey in France) are wearying. Even worse, Harriot's own tribulations are frequently interrupted with long reports of the similarly turbulent adventures of pretty much every other woman in the story. I cannot but think of Austen's "Plan for a Novel," as Harriot Stuart's definitely mimics the kind of outlandish romances that Austen mocks, particularly, "Wherever she goes, somebody falls in love with her, and she receives repeated offers of marriage." Perhaps my biggest issue with Harriot is that she says right off the bat, "I was born a coquette, and what would have been art in others, in me was pure nature," and that being said, she makes not the slightest attempt to check her flirtatiousness, which is often the cause of her plights. Lennox does afford this heroine her a well-earned if arguably deserved happy ending (amusingly, just as in Austen's plan for a novel, she meets the irresistible Dumont at the beginning of the story, but they are prevented from loving each other by a prior engagement he has to his cousin and the fact he is Catholic - hence the prioress). It really is a ridiculous story mostly of interest for its autobiographic elements and the precedent Harriot paves for Arabella.