Relations Such As These by Sara O'Brien 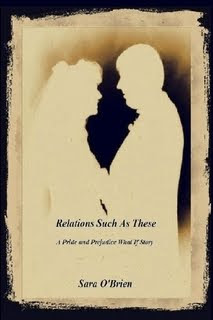 In Relations Such As These: A Pride & Prejudice What If Story, Sara O'Brien twists the plot of the original tale by having Darcy nearly trample Elizabeth on his horse before the Meryton Assembly. Understandably, they still get off on a bad foot, but quickly come to understand each other. The difficulties facing the lovers, propelling 417 pages of plot, are summed up in the title. Family members interfere with and attempt to prevent their marriage in increasingly embarrassing and scandalous ways. Of course, nothing can prevent Elizabeth Bennet and Fitzwilliam Darcy from being the happiest couple on Earth - obstacles are overcome, evil doers punished, and bliss reigns supreme.

Despite its length, this seemed a quick read to me. The fact that I've been convalescing all week might have distorted my perception, but in spite of the - shall we say explicit - nature of the text and either Ms. O'Brien (or her editor's) extreme misuse of quotation marks, I found myself quite anxious to learn what would happen next in the alternative world of the story. Page after page turned swiftly until I was surprised to find myself already nearing the end. It is not one of the books I'm going to immediately turn over and start again, but I was far more satisfied with it than I had initially expected to be.

I'm planning on addressing the "sex issue", as I tend to phrase it, in a not too distant post, so other than mentioning that this book contains far more sexual content than I am comfortable with (which for me, in an Austen context, means any sexual content), I will try to leave the subject behind me. Instead let us focus on what I did enjoy in this "What If?" variation. First of all, I appreciate that all the villainized characters are either those that Austen clearly thought poorly of or Ms. O'Brien's own creations, namely Lady Catherine, Caroline Bingley, George Wickham, and James Fitzwilliam, Viscount of Matlock. I always feel more comfortable with this genre when the characters I love aren't portrayed negatively. Secondly, this is a tale of high action - intrigues and obstacles galore are always entertaining, even when the subject matter is way beyond Austen's two inches of ivory. I was thoroughly pleased with the ending, everyone who mattered ending up prosperous and happy, and very much enjoyed "Lady Fitzwilliam/Lady Matlock" (I am not in the mood to rant about what is wrong with both of these titles, which are used interchangeably), Countess of Matlock's character, though I wish she had been a bit more developed. I love her handling of Miss Bingley and Mrs. Hurst in this scene, completly dismissing their upstart pretensions. I've deleted the bulk of the encounter to avoid spoilers, leaving only Lady Fitzwilliam's greeting and parting thoughts, with the most glaring grammatical error corrected (I cannot bear to reprint it):

"Mrs. Hurst, Miss Bingley, have a seat." She pointed to the settee across from her. "I will not bandy words, or waste time. I have allowed you time during my busy schedule due to the nature of your note, Miss Bingley. I understand there are alarming developments that have come to light in regards to my nephew?" ...

... Lady Matlock watched Caroline Bingley and Louisa Hurst leave the front window of her parlour. She had never liked those two ladies. To her, they were insignificant social climbers. She knew their mother to be one as well, however, that woman only succeeded in scaring all the men of their set off, and she married a tradesman.

I had a bit of trouble reconciling how some of the more scandalous aspects of Regency society are indulged in the book while simultaneously threatening total social ruin to members of the nobility. I doubt such illicit behavior could not be easily covered up, as it pretty much proves to be, but otherwise I found the book fairly consistent, both historically and to Austen's text. It came my way just when I was wanting a Darcy filled tomb to get lost in, and I can only thank Ms. O'Brien for the happy diversion.
Posted by Alexa Adams at 5:30 PM