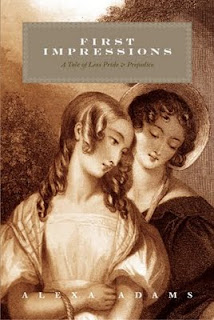 So I've learned that if I keep my questions broad enough, no one will guess the answers. Last week I asked entrants to guess who in my book says, "Love is in abundance at Longbourn." While I received a medley of answers (Mrs. Bennet, Caroline Bingley, Kitty, Charlotte Lucas), no one correctly guessed that is was Georgiana Darcy speaking to Mr. Darcy. Nevertheless, we do have two winners. The signed copy of my book, First Impressions, goes to:


Meredith
While my superfluous copy of Pemberley Manor by Kathryn Nelson goes to: 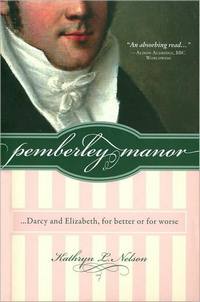 Congratulations! I shall soon be in contact with you both via email.

Would you like to know the context in which Georgiana says "Love is in abundance at Longbourn."? If so, and you have no fear of the spoiler, read on ...


Georgiana Darcy was both surprised and delighted by her brother's unexpected arrival. Rarely did he travel spontaneously unless there was an emergency to address but she could tell upon first glance, even though Wickham weighed on his mind, that never had her brother been less burdened in his life. There was an unusual swing in his always determined stride that she had not seen before. Closer inspection revealed an excited agitation in his typically somber face. “Something certainly has affected my brother, for the positive,” she thought, “but what could possibly have induced such a remarkable change in him?” She counted on being quickly enlightened.
After exchanging the mandatory pleasantries which must be attended to upon any reunion, regardless of their value conversationally, Darcy said, “I stop here on my way to Rosings, where I shall head tomorrow. I would continue tonight but as my aunt has no warning of my arrival, I thought coming upon her in the daylight would be less of a shock. Besides, this arrangement gives me the opportunity to visit with you, my dear. I have much to tell.”
“More to tell than why you are off to Rosings? A place you rarely take yourself but for your annual spring visit?” Georgiana asked silently, saying aloud, “It certainly seems you do, Brother.”
“I have formed a new acquaintance,” he said with a beaming smile that nearly took his sister aback.
“With whom?”
“A young lady.”
“Oh! I see,” she replied. Both her brother's behavior and the trip to Rosings began to make sense.
“She is a resident of Hertfordshire, Georgiana. Her father owns a small estate near Netherfield. Bingley is to marry her elder sister in December.”
“That is wonderful news,” she exclaimed sincerely, her animated smile beaming at Darcy. She had often wondered if her brother had not entertained future hopes for herself and Mr. Bingley and was pleased to see him leave the marriage mart. Though she was fond of Mr. Bingley she had never felt anything akin to romantic attraction for him, nor did he ever betray any towards her. She suspected Darcy now had much better means of making Bingley his brother and hers as well, a role much better suited to her regard for the man. “I am delighted for him,” she said, hoping to soon feel even more delight on behalf of her brother. “What is the bride's name?”
“Jane Bennet, the eldest of five daughters.”
“And your young lady?” she asked with a nervous grin.
He smiled broadly, “Miss Elizabeth Bennet, the second eldest of the house – Longbourn is its name,” he enthusiastically replied.
“He does seem smitten!” Georgiana thought as she hung on to every detail of his account.
“We met at a local assembly, the same at which Bingley met Miss Bennet. He harangued me into asking her to dance and quite in spite of myself I found her utterly charming. She is so unlike the women I meet in society, Georgiana; she has none of their air of falsity and connivance. I find her company thoroughly rejuvenating. She is kind, caring, honest, and terribly witty. She makes me feel happier than I have ever been and I have asked to spend more time getting to know her.”
“Oh Fitzwilliam! She sounds wonderful. But pray, if your plans are to be courting her, why are you suddenly off to Rosings?”
“You will have great difficulty believing the coincidence. I witnessed it and had a hard time myself grasping the notion myself. It seems that Aunt Catherine's new rector, a Mr. William Collins, happens to be cousin to the Bennets and heir of their estate. Just this week he became engaged to Mary Bennet, the third sister.”
“Love is in abundance at Longbourn,” she replied in astonishment.
Darcy laughed, “You know, when I first met the family I was certain that such a frantically matchmaking mother as Mrs. Bennet would frighten away all thinking prospects for her daughters. While it is uncertain if the appellation 'thinking' can be applied to Mr. Collins, I must say I either gravely underestimated her, the charms of her daughters, or the powerful force of her husband, as he has proven himself equally determined, in a far more sophisticated fashion, to achieve the same end.”
Posted by Alexa Adams at 6:55 AM