My Dear Charlotte by Hazel Holt 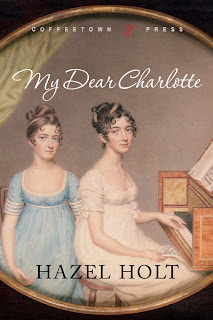 I have never read any of the "cozy" mysteries Hazel Holt is famous for, but I had to be intrigued by My Dear Charlotte, written "with the assistance of Jane Austen's letters." An epistolary novel told via the pen of Miss Elinor Cowper (writing to her sister Charlotte), Ms. Holt weaves a murder mystery and a romance amongst details of the daily lives of the fictional residence of Lyme Regis (approx. 1815), frequently quoting Austen's letters along the way. Academically, the concept is masterful. As a source of entertainment, the book falls kind of short.

I have read are Austen's letters more than once, though not recently. I find it unnecessary to do so as I am often revisiting their content in other sources, like in David Nokes' biography, Jane Austen: A Life. Yes, Austen's life is fascinating, and I am eternally thankful for each scrap of paper we have written by her hand, but I don't find her letters particularly rereadable, not nearly to the degree of her novels. Her voice is fascinating to analyze, but her material is mostly gossip and trivialities. I hate to say that, but it is true. So when Ms. Holt based her mystery in those trivialities, she sacrificed the intrigue that keeps a reader turning the page. It took me a week to read this book, always in fits and starts. It was very pleasant when I picked it up but far too easily put back down.

Despite the introduction's claims that all will enjoy this book, be they mystery readers or Austen fans, those who have studied the letters or those who know nothing of them, the only people I would recommend this book to are either Austenites (on the geekier side of that spectrum) or those with an interest in 19th century housekeeping. The romance is predictable, the hero uninspiring, and the mystery is not satisfactorily concluded. However, while it may not be "excessively diverting", it is often fairly so, and the exercise of picking Austen's words from Ms. Holt's - no easy task, as she does a remarkable job of capturing Austen's tone - is quite enjoyable. For example, the following passage is riddled with Austen. While the rather random characters her words are manipulated to accommodate mean little to the reader, spotting Jane amongst them thoroughly amuses:

Since you will wish to know, I wore my checkered muslin with a band of the same round my head and I danced with Captain Tilson and Mr Cooke, when Miss West had done with him. He is a quiet young man who fancies himself a poet. And, since his mind was obviously elsewhere when dancing with me, he was probably composing verses to Miss West's beauty.


There was the same kind of supper as last time and the same want of chairs.


I am glad that our aunt's friends the Mortons have engaged themselves to take you about when she attends upon our uncle. From what you say, they sound most agreeable people. They were lucky to secure seats for Drury Lane, and in a front box, too, since, as you say, there is such a rage for seeing Kean. I greatly envy you seeing his Shylock.


Dame Bushell washes for us one week more, after which time John Stevens' wife undertakes our purification. She does not look as if anything she touched would ever be clean, but who know?


You say that black gauze cloaks are much worn. Do you intend to purchase one to wear at the theatre?


Your envious but affectionate sister,

Most of the book is much like this: Austen's letters worked into a narrative that has little to do, until rather far into the story, with the murder mystery at hand. The most exciting things that happen, other than the murder itself, of course, is that the store cupboard floods and the chimney requires repair (events that should also have a familiar ring).

There are illusions to Austen beyond her letters in the book. One of my favorite aspects is the background presence of a third Cowper sister, a married lady named Mary, whose name and character are awfully familiar. She is usually mentioned only as an aside at the end of Elinor's letters, as in these two incidences:

Mary complains that it is many weeks since she heard from you but says you are doubtless so immersed in the pleasures of Bath that you have no time to write, although she did tell you in her last that she has had one of her bad throats this last month or more and, as we are aware, her throats are always worse than anyone's. However, I remain your affectionate sister,

We also heard from Mary today and she begs me to inquire of you whether they sell cloths for pelisses at Bedford House, and if they do, will be very much obliged to you to desire them to send her down patterns with width and prices; they may go any day of the week from Charing Cross. Why she could not write to you herself about this matter I do not know, though, of course, I am always interested in her new purchases!


I greatly enjoy the exquisite weather we are having and selfishly hope we are to have it last till Christmas - nice, unwholesome, unseasonable, relaxing, close, muggy weather.

Other characters also resemble Austen's creations: the mild, elderly gentleman whose family is at the center of the murder is almost a precise replica of Mr. Woodhouse (imagine his distress!) and Mrs. Cowper is a somewhat milder version of Mrs. Bennet. I like how this passage illustrates the latter's matchmaking propensities:

We heard yesterday from Frank whose complaints about the tediousness of the business in Vienna seem to have been modified somewhat by the presence of a Miss Forsyth. He was introduced to her at a formal dinner and then encountered her at a ball a few days later and seems to have been greatly struck by her wit and beauty. It would seem that she will be in Vienna for some time since her father, Sir Stuart Forsyth, is on a mission there and has had the forethought to bring his wife and daughter with him. As you may imagine, our mother is in raptures and can scarcely talk of anything else and is extremely annoyed with Frank for not providing the many and more particular details she wishes for. Poor Miss Forsyth, she little knows what expectations she has raised!

But of course, the best character in the story is she who speaks with Austen's tongue, Elinor Cowper. One last quote (I promise!) just because it is my very favorite from the book:

Since Sir Edward's boys are to come tomorrow I have been searching the schoolroom for Frank's 'collection' and have discovered many other treasures while I was about it. That ivory pen, curiously carved, that we fell out about ten years ago found itself at the back of a drawer of the old dresser in the corner, along with a shrivelled skeleton of some small creature, which I presume to be one of William's specimens. I will include the latter, since boys are interested in such things. The pen, however, I will claim for myself, since, you will recall, it was originally a present to me from old Mrs Woodward and not to you as you claimed at the time. I do not wish to open old quarrels but I think, with the passing of time and with mature reflection, you will admit the justice of my cause.

Isn't she delightful? There is so much in this book to parse and analyze, and it can be great fun, but that doesn't make the overall narrative successful. A fascinating academic exercise it certainly is, but how often does such a thing translate into riveting reading material? Rarely. I had much more fun scanning back through the book to write this review than I had actually reading it. Nevertheless, for the hardcore Janeite - especially, I suspect, those with a distaste for fan fiction - this book induces a comfortable sense of contentment: the kind we feel when reunited with an old friend.
Posted by Alexa Adams at 1:37 PM