The Companions of Jehu by Alexandre Dumas

Today I stray away from Austen into a very different world. While it was she who famously confined her literary scope to a "little bit (two inches wide) of ivory", Alexandre Dumas, in The Companions of Jehu, says the following:


Perhaps those who read our books singly are surprised that we sometimes dwell on certain details which seem somewhat long drawn out for the book in which they appear. The fact is, we are not writing isolated books, but, as we have already said, we are filling, or trying to fill, an immense frame.

And indeed, the frame is immense.  I am no expert on Dumas, but I greatly enjoyed the books of his I have read previously: The Three Musketeers, The Man in the Iron Mask, The Black Tulip, and The Count of Monte Cristo (which I read in less then 48 hours). His books are epic in scope, depicting fantastic (and distinctly masculine) worlds of adventure. I have always wanted to read more of his work, so when The Classics Circuit announced a Dumas tour, I jumped at the opportunity. To help rationalize this impulse, I chose the book which seemed to be most complementary to the Austen focus of this blog, about a band of royalist smugglers during the  Napoleonic Wars. At least the time period was in sync. I knew no more, trusting in Dumas to awe me. Of his own plot, he has one character say, "Why, it isn't possible that such things can happen in France, in the last year of the eighteenth century. It might do for Germany in the Middle Ages, in the days of the Henrys and the Ottos." This sounds to me an awful lot like Austen - Henry Tilney, specifically - but rather than disproving such impossible possibilities, Dumas takes his readers into the heart of chivalric romance. There are no literal dragons to slay, but his heroes are brave enough to fight the fiercest beasts imaginable. 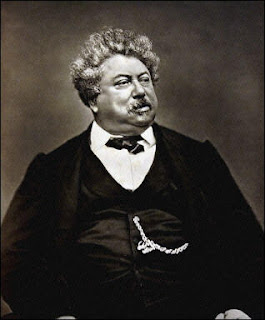 The Companions of Jehu, as Dumas tells us in his "An Introductory Word to the Reader", was inspired by a story he had read in Charles Nodier's Souvenirs de la Revolution of four young highwaymen, belonging to a band called the Company of Jehu, who fought their way out of a prison in order to avoid the guillotine. His son provided him with outlines for two characters for the tale,"an English gentleman and a French captain", the latter being "a mysterious character, who courts death with all his might, without being able to accomplish his desire". These are Lord Tanley, who goes by the quintessentially English "Sir John", and Roland de Montrevel, aide-de-camp to and best friend of the man called General Bonaparte at the beginning of this novel. While Dumas weaves a wonderfully romantic tale involving Roland, Sir John, and the Companions of Jehu, here transformed into a band of aristocratic royalists, robbing government diligences in support their righteous cause, Napoleon's story dominates. As Dumas himself acknowledges:


But we are writing a simple narrative, in which Bonaparte shows himself, if only for a moment, he becomes, in spite of himself, a principal personage.


The reader must pardon us for having again fallen into digression; that man, who is a world in himself, has, against our will, swept us along in his whirlwind.

The action begins when General Bonaparte, accompanied by Roland, returns from the Egyptian campaign and continues through such legendary events as the 18th Brumaire, which instigated the dissolution of the Republic by making Napoleon First Consul, and  the establishment of the Bonaparts in the Tuileries, ending with the Battle of Marengo. The historical details are precise and stunning. Readers of Sandra Gulland's Josephine Bonaparte trilogy (which I really enjoyed when I read it a few years ago - especially the first book, which kept me up all night) will wonder how much of her account was inspired by Dumas'. Napoleon is, of course, presented as ambitious and daring, but also as indulgent and loving, if in a rather dictatorial and regimented fashion. It is an enthralling portrait. Here is just one example of the many passages in which Dumas allows himself to be "swept ... along in his whirlwind":


Bonapoarte had a look for every thought that stirred his soul. In Napoleon, this look, except in the momentous circumstances in his life, ceased to be mobile and became fixed, but even so it was none the less impossible to render; it was a drill sounding the heart of whosoever he looked upon, the deepest, the most secret thought of which he meant to sound. Marble or painting might render the fixedness of that look, but neither the one nor the other could portray its life - this is to say, its penetrating and magnetic action. Troubled hearts have veiled eyes.


Bonaparte, even in the days of his leanness, had beautiful hands, and he displayed them with a certain coquetry. As he grew stouter the hands became superb; he took the utmost care of them, and looked at them when talking, with much complacency. He felt the same satisfaction in his teeth, which were handsome, though not with the splendor of his hands.


When he walked, either alone of with someone, whether in a room or in a garden, he always bent a little forward, as though his head were heavy to carry, and crossed his hands behind his back. He frequently made an involuntary movement with the right shoulder, as if a nervous shudder had passed through it, and at the same time his mouth made a curious movement from the right to left, which seemed to result from the other. These movements, however, had nothing convulsive about them, whatever may have been said notwithstanding; they were a simple trick indicative of a great preoccupation, a sort of congestion of the mind. It was chiefly manifested when the general, the First Consul, or the Emperor, was maturing vast plans. It was after such promenades, accompanied by this twofold movement of the shoulders and lips, that he dictated his most important notes. On a campaign, with the army, on horseback, he was indefatigable; he was almost as much so in ordinary life, and would often walk five or six hours in succession without perceiving it.


When he walked thus with some one with whom he was familiar, he commonly passed his arm through that of his companion and leaned upon him.

In The Companions of Jehu (which was written in 1858, allowing Dumas to interview those who could attest to the great man's habits first hand), the reader gets to know Napoleon  personally, the way Roland and his family do.  We see him mindlessly rip to shreds the upholstered arms of chairs as he stabs them with his penknife, listen to dispatches while bathing, and concocting his greatest stratagems. It is a picture of a man of the cusp of his destiny - a destiny which shook the world of the writer and his contemporaries so violently that we still feel the reverberations today. This book allows the reader to journey by his side as he takes "his first steps along that incline, at once glorious and fatal, which was to lead him to a throne - and to St. Helena." As I could easily turn this post into a many of thousands of words essay, I will simple affirm that the parallel story of the book, that of those mentioned in the title, is absolutely thrilling. There is romance, intrigue, and daring deeds galore. While this book isn't in the same league as Dumas' masterpiece, The Count of Monte Cristo, it is nonetheless a testament to his literary genius. As he so accurately declares in his introductory note, "What historians these poets would make, if they would but consent to become historians!"

A final note on the edition: I must mention that I read this book from the anthology, Works of Alexandre Dumas, Kindle Edition.  While it is a bit disorienting reading a work of this length, bundled as is is with almost all of Dumas' other enormous books, without being able to reference a page number, this was, without a doubt, my best Kindle purchase to date. For less than five dollars I now have an enormous amount of never before read Dumas to indulge in, just in time for summer reading. Is that not felicitous?
Posted by Alexa Adams at 10:33 AM