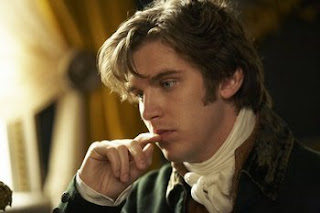 Edward Ferrars was not recommended to their good opinion by any peculiar graces of person or address. He was not handsome, and his manners required intimacy to make them pleasing. He was too diffident to do justice to himself; but when his natural shyness was overcome, his behaviour gave every indication of an open, affectionate heart. His understanding was good, and his education had given it solid improvement. But he was neither fitted by abilities nor disposition to answer the wishes of his mother and sister, who longed to see him distinguished--as--they hardly knew what. They wanted him to make a fine figure in the world in some manner or other. His mother wished to interest him in political concerns, to get him into parliament, or to see him connected with some of the great men of the day. Mrs. John Dashwood wished it likewise; but in the mean while, till one of these superior blessings could be attained, it would have quieted her ambition to see him driving a barouche. But Edward had no turn for great men or barouches. All his wishes centered in domestic comfort and the quiet of private life. Fortunately he had a younger brother who was more promising.

Age: 22 or 23. He is engaged to Lucy Steele for four years and proposed sometime after leaving her uncle, Mr. Pratt's, care at age 18 and going up to Oxford at 19.

Hobbies: Unknown. He seems rather aimless in his pursuits, which consist of visiting friends and family, until necessity provides him with the profession he has so long wanted.

Most charming quality:  It must be self-deprecation, for it is only when he is criticizing himself that he says anything of substance.

Most detrimental tendency: Edward is too quick to justify his faulty actions. He finds a multitude of excuses for his engagement to Lucy, primarily blaming those who allowed him to be idle, and later justifies his conduct towards Elinor at Norland in the most selfish terms ("The danger is my own; I am doing no injury to anybody but myself.").

Greatest strength: Ability to engage the affections of Elinor Dashwood.

Truest friend: Elinor Dashwood has his interests closest at heart, and Colonel Brandon proves an excellent benefactor, but I believe this honor must go to his brother Robert, for unwittingly releasing him from a most unfortunate attachment.

Worst enemy: I believe this honor must be shared between his fiancee, Lucy Steel, and his mother, a very sad predicament for the poor man to be in.

Prospects: Though "the eldest son of a man who had died very rich ... except a trifling sum [1000 pounds], the whole of his fortune depended on the will of his mother." Prudence dictates caution regarding such an arrangement, which proves to be highly justified when his capricious mother disinherits him in favor of his younger brother. He does, however, still receive 10,000 pounds upon his marriage, making his annual income, including the living he receives from Colonel Brandon, approximately 750 pounds.

Favorite quotations: "I was engaged elsewhere."

"It is a beautiful country," he replied; "but these bottoms must be dirty in winter."
"How can you think of dirt, with such objects before you?"
"Because," replied he, smiling, "among the rest of the objects before me, I see a very dirty lane."

"... and, at length, as there was no necessity for my having any profession at all, as I might be as dashing and expensive without a red coat on my back as with one, idleness was pronounced on the whole to be most advantageous and honourable, and a young man of eighteen is not in general so earnestly bent on being busy as to resist the solicitations of his friends to do nothing."

"I like a fine prospect, but not on picturesque principles. I do not like crooked, twisted, blasted trees. I admire them much more if they are tall, straight, and flourishing. I do not like ruined, tattered cottages. I am not fond of nettles or thistles, or heath blossoms. I have more pleasure in a snug farm-house than a watch-tower--and a troop of tidy, happy villages please me better than the finest banditti in the world."


"I have no wish to be distinguished; and have every reason to hope I never shall. Thank Heaven! I cannot be forced into genius and eloquence."


"I had therefore nothing in the world to do, but to fancy myself in love ..." 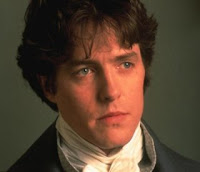 Musings: As the observant reader has already noted, I am no fan of Mr. Edward Ferrars. Elinor must see something in him, for there can be no doubt of the sincerity of her attachment, but what it is I am unable to fathom. I am constantly puzzled as to how a woman of her perception could fall for him. Other than his noble action in upholding his engagement to a woman he does not love (and let it be noted that to act otherwise would have been completely reprehensible according to the mores of the day, possibly even resulting in legal action), Austen endows Edward with almost no attractive qualities. It is Elinor's affections that redeem him, for it is totally inconceivable that she could care for someone who did not possess some kind of valuable characteristic or another.

While it is easy to forgive Edward for making a foolish decision in his youth (who hasn't?), it is far more difficult to excuse his behavior to Elinor at Norland. Even she calls him out for his conduct:

Elinor scolded him, harshly as ladies always scold the imprudence which compliments themselves, for having spent so much time with them at Norland, when he must have felt his own inconstancy.

"Your behaviour was certainly very wrong," said she; "because--to say nothing of my own conviction, our relations were all led away by it to fancy and expect what, as you were then situated, could never be."

He could only plead an ignorance of his own heart, and a mistaken confidence in the force of his engagement.

"I was simple enough to think, that because my faith was plighted to another, there could be no danger in my being with you; and that the consciousness of my engagement was to keep my heart as safe and sacred as my honour. I felt that I admired you, but I told myself it was only friendship; and till I began to make comparisons between yourself and Lucy, I did not know how far I was got. After that, I suppose, I was wrong in remaining so much in Sussex, and the arguments with which I reconciled myself to the expediency of it, were no better than these:--The danger is my own; I am doing no injury to anybody but myself."

Elinor smiled, and shook her head.

Would you smile at the man in your life if he explained himself thusly? The head shake indicates that Elinor is not satisfied, despite being ready to forgive. One must wonder how this issue would again arise after their marriage. If I were his wife, I'd be rather loath to let this particular gentleman to spend any length of time in company with an eligible lady. His record is not good.

What we can say with certainty is that Edward's character is sure to benefit from Elinor's influence, as can be seen almost immediately in his attempt to make amends with his mother at her urging. However, I cannot help but contemplate what such a man would have become had he been called upon to marry his first fiancee: embittered, broken, and inclined to blame everyone but himself for a predicament he created. I cannot like him, despite Elinor's preference. Thank goodness for Colonel Brandon, a far more satisfying hero, and it is he I will tackle next.