Hmmm. As of 9:45 AM, Monday morning, I still have no stunning results to share, though I have, at least, passed last year's total. Let's see if I can't make this number slightly less abysmal before this post goes live, shall we? I shall report back. In the meantime, I require inspiration.

Balls, balls, balls. My NaNoWriMo social calendar is excessively full. Most of the scenes needing to be written take place in the ballroom, spanning the 18th and 19th centuries. Maybe I should rename this book Dancing at Pemberley? But no: I want to have the continuity of the Tales of Less Pride and Prejudice name, so it is clear that this is a rewrite. This is, of course, assuming Amazon doesn't give me a hard time about the title. Think it's worth the fight?

But I digress (or procrastinate, take it as you will). I need ballroom inspiration to set the scene through at least three more I'm writing into the book. Most of these are Twelfth Night balls, which I have proclaimed an annual Pemberley tradition. So first things first: what would they be wearing? This is a bit of a mess, for some torturous reason I have set the opening scene in 1791, at a time when fashions were rapidly changing (read more about it here). Just compare these two portraits by George Romney, painted four years apart. 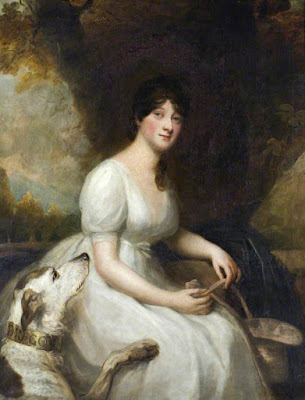 So I am envisioning a mix of styles on this occasion, the older people still in wigs and panniers, while the younger guests have long abandoned powder and voluminous skirts for those styles that are the precursors to the Regency fashions we all love so much. By the time Elizabeth has become Mrs. Darcy and is making her debut in society, her attire might have looked something like this:

Now, what would they have been listening/dancing too? This changed less drastically over the years, though the waltz (which I wrote about here) was becoming fashionable towards the end of my tale. This playlist should keep me in the right mood for a while, at least:

At twenty til noon, I am at 6,936 words. Pretty pathetic, but I did finished the opening ball scene, so I can abandon the 18th century for the far more familiar 19th. That's progress. I really don't think I'll hit the 50,000 word goal. Honestly, if I just walk away with a complete first draft, I will be very well satisfied. But, hypothetically, if I were to write another 43,064 words this month, I would need to clock over 2,800 words every day for the rest of the month. My current average is 455. It's not impossible. I have done it before. Let's see where I am in a week ...
Posted by Alexa Adams at 6:00 AM