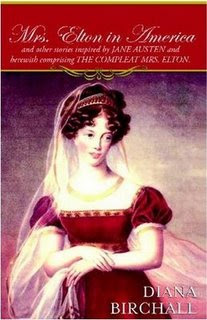 Last week I read Mrs. Elton in America, published in 2008 by Sourcebooks, which comprises all three of the Mrs. Elton stories by Diana Birchall. It's a fascinating notion - taking one of the most hated characters in Austen and attempting to redeem her. This began with In Defense of Mrs. Elton, the second story in the volume, which is a fairly straight forward retelling of Emma from Mrs. Elton's perspective. The entire text of this story can be found online at jasna.org along with a set of quirky illustrations by Juliet McMaster which are sadly absent from the Sourcebooks edition (like this one of Mr. Elton). Mrs. Elton is displayed as a misunderstood woman, aware of her own social awkward

ness and inclined to put her foot in her mouth when sincerely attempting to endear herself to her new neighbors. It is a pretty story and the depiction of the relationship between Emma and Mrs. Elton, which is followed many years beyond the end of the original novel, is highly believable.

The first story in the volume (the second one composed by Ms. Birchall) is entitled The Courtship of Mrs. Elton and is available online at jasnasaz.org. I understand that this has been adapted into a short play. It is my favorite of the stories in this collection. Miss Augusta Hawkins is a young lady in Bath for yet another season and is absolutely determined that this year will find her married. She meets Mr. Elton almost immediately upon her (and his) arrival and they are instantly taken with each other:

There was nothing new in this social round to Augusta, with her eight seasons' experience of the place; but it did often occur to her, in the course of her multifarious activities, that, of all the people she had met during them, none had ever been more attractive to her than this Mr. Elton. He was very handsome, and decidedly agreeable; that he liked her was beyond question; and the Miss Milmans had swiftly found out, and swiftly related to her, that he was installed in an excellent and modern vicarage in one of the very finest towns of England, as well as being possessed of a comfortable competence of his own. Augusta had lived enough years in the world to know that she could hardly do better; that this might, indeed, be her last and best chance; and though she did not call herself desperate, she had already made up her mind, before she set eyes upon him for the second time, that, if he were ever to ask her to marry him, she would accept.

Surrounded by company so vulgar that she seems (comparatively) the embodiment of refinement, Miss Hawkins fastidiously encourages Mr. Elton in a manner that must be gratifying, considering his recent rejection. So satisfied are both parties by the success of the courtship that one may honestly remark (without the bitterness that tinges Frank Churchill's words), "Happy couple! How well they suit one another." This story inspires much more sympathy in me for Mrs. Elton than the other two. It is a thoroughly sweet tale and I will certainly reread it many times in the future.

The final (and longest) story in this book is Mrs. Elton in America. I have been puzzling over what to say about it for a week and am still at a loss. The story sees the transformation of Mrs. Elton from the character created by Jane Austen into an entirely new and unrecognizable creature. Roughly picking up where In Defense of Mrs. Elton leaves off, the Eltons, having over spent, retrench to the United States as missionaries. Here they survive horrific hardships as they head West in the ubiquitous covered wagon, where Mr. Elton is sent to convert the Comanches. By the end of the book Mrs. Elton has been fully democratized, turning into a sensible, no nonsense woman. I admit to being transfixed by the story as I read it but cannot actually say I liked it. It is a curious read but one too far outside the scope of Austen for me to feel comfortable with it.

Mrs. Elton in America leaves me wanting more books of redemption for Austen's less likable characters. As far as I know, no one has yet to defend Elizabeth Elliot, Lucy Steele, or Isabella Thorpe, all of whom seem ripe for such treatment. Aunt Norris would also be a challenging but fascinating character to defend.
Posted by Alexa Adams at 7:20 AM