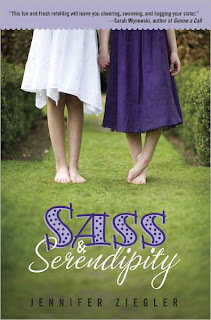 Upon receiving an email from Jennifer Ziegler's publicist, asking if I would be interested in reviewing her new young adult novel inspired by Sense & Sensibility, I was happy to agree for three reasons: 1) with the new baby, young adult lit conforms to my attention span, 2) the book would count towards my completion of the Sense & Sensibility Bicentenary Challenge, and 3) I love free books. Sass & Serendipity fulfilled my expectations, providing me with a quick and easy read - the perfect source of light entertainment while breast pumping (about the only time I have the opportunity to read these days). Though the book bears little resemblance to Austen's novel, except in its focuses on two sisters of differing personalities, it kept me engaged and amused, a rather impressive feat when one considers that I could barely tolerate the main characters.

Gabby and Daphne live in the imaginary Texan town of Barton with their divorcee mom. Gabby, the older sister, copes with her extreme anger at her father and feelings of abandonment following her parent's divorce, emotions that have left her bitter and alienated from everyone in the town except her best friend, Mule. Daphne, on the other hand, is peppy and popular, having managed to maintain a rather naive sense of romantic idealism in spite of her broken home life. The story focuses on Gabby dropping the chip on her shoulder, while Daphne gains a more realistic perspective on love and romance.

Though Daphne's story does in ways resemble Marianne Dashwood's experience, Gabby, while cast as the "responsible" sister, is nothing at all like Elinor. Instead of inspiring admiration, I actually found myself hating her, as her negative energy taints everything around her. She continuously accuses Daphne of selfishness when she is equally so, revealing herself to be completely lacking in Elinor's self-perception and consideration. Daphne too, while more tolerable than Gabby, lacks the intelligence and conviction that makes Marianne so appealing in spite of her flaws. However, there is a chance this criticism is unfair. I usually avoid young adult novels, as they tend to be a bit emotionally transparent for my taste, and perhaps that is what really bothers me about these characters. Those who enjoy the genre might be more tolerant.

For me the bottom line is that if Sass & Serendipity inspires a young reader to pick up Austen's first novel, it is worth its weight in gold, but for those already familiar with her masterpieces of literature, this book doesn't particularly add to ones appreciation. Nevertheless, as I said at the beginning of this post, it was the perfect light read for me to pick up and put down again when able to grab those few moments available to me. I recommend it to any of you who find yourselves in similar circumstances and need something to just pick up now again.
Posted by Alexa Adams at 1:00 AM