Lady of Quality by Georgette Heyer (vs. Black Sheep) 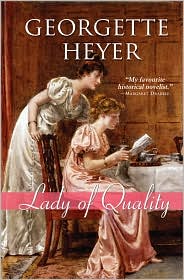 I'm surprised I did not previously review this book, especially becomes it pays such obvious homage to Emma. I thought I had, and intended this post to be more of a comparison of Lady of Quality to Black Sheep (which I did previously review here), rather than a review of either, but it now seems necessary. I will share my thoughts on Lady of Quality, the last book Heyer wrote, and then we may indulge ourselves in a quick comparison of the two books, for they are remarkably similar.

Miss Annis Wychwood, despite being beautiful and rich, has resigned herself to a life of spinsterhood at 29, attempting to content herself with a sociable life in Bath. While this arrangement is preferable to living with her brother and his wife - who Annis likes very well, particularly the latter, but prefers her independence - it does have its drawbacks. Particularly, Annis is bored, so when she comes across a broken down carriage that had carried a runaway girl and the boy she does not want to marry (the feeling is mutual), she is almost eager to embroil herself in the affair. This is how she meets Mr. Oliver Carleton, the girl's guardian, "the rudest man in London", and our hero:


"But am I not right in believing that your custom is to refer every request Lucilla has addressed to you to Mrs Amber's judgment?"


"Yes, of course you are," he replied impatiently. "What the devil do I know about the upbringing of schoolgirls?"


"What a miserable sop to offer your conscience!" she said.


"My conscience doesn't need a sop, ma'am!" he said harshly. "I may be Lucilla's legal guardian, but it was never expected of me that I should be concerned in the niceties of her upbringing! Had it been suggested to me I should have had no hesitation in refusing such a charge. I've no turn for the infantry!"


"Not even your brother's only child?" she asked. "Don't you feel any affection for her?"


"No, none," he replied. "How should I? I scarcely know her. It's useless to expect me to become sentimental because she's my brother's child: I knew almost as little about him as I know about Lucilla, and what I did know I didn't much like. I don't mean to say that there was any harm in him: no doubt there was a great deal of good, but he had less than commonsense, and too much sensibility for my tastes. I found him a dead bore."


"Well, I find my brother a dead bore too," she said candidly, "but however much we rub against each other there is a bond of affection between us. I had thought that that must always exist between brothers and sisters."


"Possibly you know him better than I ever knew my brother. There were only three years between us, but although that's a mere nothing between adults, it constitutes a wide gulf between schoolboys. At Harrow, he formed a close, and, to my mind, a pretty mawkish friendship with young Elmore. They were both army-mad, and joined the same regiment when they left Harrow. From then on I only saw him by scraps. He married a pretty little widgeon, too: she wasn't as foolish as her sister, but she had more hair than wit, and a mouth full of the sort of pap I can't stomach. I knew, of course, when he bought Chartley Manor that the bosom-bow friendship between him and Elmore was as strong as ever, and I suppose I should have guessed that such a pair of air-dreamers would have hatched a scheme to achieve a closer relationship by marrying Elmore's heir to Charles's daughter. Though why Elmore - or Iverly, as by that time he was - should have persisted in this precious scheme after Charles's death is a matter beyond my comprehension! Unless he thinks that Lucilla's property is just the thing to round off his own estate?"


"Well, that is what I suspect," nodded Miss Wychwood, "but it is only right that I should tell you that Ninian says it is no such thing. He says his father has never had a mercenary thought in his head."


"On the whole," said Mr. Carleton, with considerable acerbity, "I should think the better of him if his motive had been mercenary! This mawkish reason for trying to marry Lucilla to his son merely because he and my brother were as thick as inkle-weavers fairly turns my stomach! I never liked the fellow, you know."


Her eyes were alive with laughter. She said perfectly gravely, however: "For some reason or other I had suspected as much! Is there anyone whom you do like, Mr Carleton?"


That made her burst out laughing. Still gurgling, she said: "You are quite outrageous, you know! What in the world have I said or done to make you like me? Of all the farradiddles I ever heard that bears off the palm!"


"Oh, no! I never flummery people. I do like you, but I'm damned if I know why! It isn't your beauty, though that is remarkable; and it certainly isn't anything you have said or done. I think it must be your quality - that certain sort of something about you!"


"It's my belief," said Miss Wychwood, with conviction, "that you are all about in your head!"


He laughed. "On the contrary! But don't delude yourself into thinking that my liking you makes me think you are a fit person to have charge of my niece."

Yes, she does call him "abominable" before the end of this conversation, confirming in true Heyer fashion that this is a case of love at first sight.

There are some incredibly priceless moments in this book, many of them attributable to Annis' rather dim witted companion, an impecunious cousin named Maria Farlow (very Miss Bates-like). The tension that builds around her ceaseless chatter and the annoyance it causes to Mr. Carleton, particularly, punctuates the climax of the novel in an absolutely hilarious fashion. Between herself, an overly rigid suitor, and the antics of Lucilla Carleton and Ninian Elmore, the book remains in a constant state of silliness, our hero and heroine providing the sarcastic perspective through which the mayhem unfolds. It is a perfectly satisfying Heyer; one which improves on a second read.

So what if Georgette Heyer's novels are remarkably formulaic? They're hysterical. No matter if readers encounter the same plot reworked with slight variations - the humor remains fresh. Black Sheep and Lady of Quality both focus on an older heroine, established in Bath, who meets her match in a most inappropriate, though socially equal, gentleman. The catalyst for bringing hero and heroine together is a young lady, of feisty and impetuous nature, on the verge of her come out. Both heroines are left to contemplate the proposals of their respective heroes, puzzling over the social dilemmas of marrying these difficult gentlemen, and fall ill in the process. I like to think of this plotin the light of an Austenesque reimagining - what if Emma Woodhouse did not fall in love with the convenient Mr. Knightley and achieved her intention of remaining single? She would often have a niece (or some other convenient young lady of interest) with her.

Black Sheep was published in 1966 and Lady of Quality in 1972, just a few years before Heyer's death. My biggest problem with Black Sheep, which is really one of my favorites, is the terribly abrupt ending. Perhaps Heyer was addressing this issue when she revisited the scenario. The end of Lady of Quality is much tidier, but the characters in Black Sheep are far more dynamic. Furthermore, the language in Lady of Quality is more repetitive than one usually sees in Heyer. Both hero and heroine have favorite exclamations that help to define their characters, making up for a lack of development (particularly in the case of Mr. Carleton). I have not previously looked into the chronology of Heyer's novels, but I think I now must consider the order in which her books were published. I am curious to see if Heyer repeatedly reworked earlier plots, and, if so, whether she was fixing problems with her earlier novels, or if she was just running out of fresh ideas. I'd love to hear your thoughts on this, fellow Heyer fans. Perhaps someone has already done a study on this? Stay tuned for more, though I do not have the slightest idea when I will find the time to address the subject.
Posted by Alexa Adams at 11:50 AM