The Deception at Lyme by Carrie Bebris 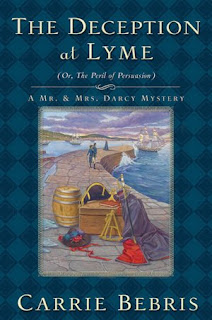 One should never make promises one cannot keep. In March of 2010, in a post titled "The Mr. and Mrs. Darcy Mysteries by Carrie Bebris", I asserted firmly that "I will most certainly be reviewing [The Deception at Lyme] here as soon as it becomes available." Well, the book came out last September, and  have been so absorbed with my little one that I did not get the opportunity to sit down and read it until this weekend. If there is anyone out there who has been anxiously waiting for me to make good on my word, I apologize for this terribly tardy review.

As stated in the post quoted above, Ms. Bebris' books have gotten better as this series progressed. The last book, The Intrigue at Highbury (reviewed here), is by far the best she has composed thus far, and she is a smart enough author to have replicated, as much as possible, the elements that were so successful in that novel. In The Deception at Lyme, she again immerses us in the society of Austen's characters, this time the cast of Persuasion. Unfortunately, we spend much of that time with the many undesirable characters to populate that book (would have enjoyed more Anne and Wentworth). The action begins when the Darcys arrive at Lyme for the duel purpose of enjoying the sea air and meeting with a naval officer who has transported home their cousin's trunk, he having died in battle a few years earlier. Almost immediately they find the body of a pregnant woman who has fallen from the Cobb. She still lives and is quickly transported to the small home of the Harville's, recommended for their previous experience with such matters. When the woman proves to be Mrs. Clay, the Darcys find themselves suddenly immersed in the affairs of the Elliot clan.

I do not want to reveal too much of the intricate plot that unfolds, but I promise you will have great difficulty putting it down. So as not to spoil the fun, I will only make mention of a few highlights. Ms. Bebris does an excellent job of developing Mrs. Smith's story, firmly rooting her tale in Austen's account. I always appreciate when Austenesque authors demonstrative careful attention to their source material.  I was actually a bit concerned when the Darcy's old friend, Dr. Randolph., makes an appearance, for his presence is associated with all the voodoo and mysticism that prevailed in the first few books in this series and, I believed, hindered their success, but his cameo provides important plot development without bogging the story down in the unexplainable. Nicely done indeed, though I did keep expecting him to have some further role int the story. And just one little spoiler, for I must share with you my favorite moment of the book - the entrance of Captain Wentworth, when he joins Darcy in a chase towards a two-year-old tottering on the harbor's edge:


The sound of Darcy's footfalls striking the hard pavement did command the attention of the gentlemen near the warehouses on the quay. One of them, identifying the danger and realizing Darcy's purpose, himself broke into a run. From opposite ends of the Cobb they neared the toddler, their swift advanced at last penetrating Ben's awareness. The sudden sight of two men descending upon him startled the child. As the gap between them closed, the boy jerked involuntarily, upsetting his equilibrium.


Ben teetered over the water at an angle impossible for the child to correct on his own. Darcy reached for him, but his grasp was two strides shy. The other gentleman, however, was close enough to extend his arm and push the boy toward Darcy, sacrificing his own balance - and tumbling into the water himself.

What a wonderful moment to bring two of Austen's greatest heroes together, rushing to the rescue in tandem! Moments like this are what makes these books so much fun. I wonder if there will be any more Mr. and Mrs. Darcy Mysteries - we now have one book for each of Austen's major novels, but the Darcys' story feels like it is only beginning. It would be lovely if we could mingle with those characters from other novels that have becoming friends with the Darcys once more. I will remain on the lookout for further books, though I make no promises regarding the promptness of my reviews.
Posted by Alexa Adams at 7:40 AM