A Civil Contract by Georgette Heyer 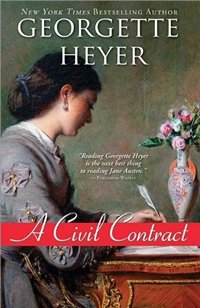 Once again, my entire family was sick this week. I knew what I was signing up for when I put my daughter in day care (indeed, one of my stated reasons for enrolling her was for the sake of building immunities), but I do hope this is the last bout of rhinovirus I have to cope with for a while. The only benefit of being ill all toghether is the great family reading time it provides. How lucky I had just received two never before read Heyer novels! Today I will tell you about the first, A Civil Contract.

Adam Deveril, army captain and new Viscount of Lynton, must resign his commission in order to return home and see to his family's finances, as his father's death has left them on the brink of ruin. A practical, disciplined man, he takes his responsibilities seriously, doing all he can to save his ancestral home, including breaking off his engagement to the beautiful lady from a nearby estate. It is at her father's urging that Adam agrees to marry Jenny Chawleigh, the plain and awkward daughter of an enormously wealthy and decidedly vulgar Cit, allowing him to save his estate and devote his life to farming. A Civil Contract follows the progress of their union.

This novel is markedly different from Heyer's customary style, though not so much that it isn't completely apparent from the beginning that Jenny will, in time, prove the perfect wife for Adam. By marrying the hero and heroine off early, as she done in other novels, like Friday's Child (read my review here), Heyer is able to explore a different kind of love than she usually depicts. Adam and Jenny become thoroughly comfortable with each other, loving the peaceful harmony of their relationship. They do not attempt "to cut a dash" or indulge in fashionable pursuits like the main couple in Friday's Child, choosing instead to settle quietly in the country. Instead of folding immaculate neckties, Adam can be seen wearing a peasant's smock (to the great horror of his former fiancee) and Jenny, forgoing fashionable ringlets, arranges her hair in staid braids. The values, so at odds with most (though not all) of Heyer's characters, adopted by this couple make this novel feel far more Victorian than Regency Romance, despite the fact that it is set against the backdrop of Waterloo. But the biggest anomaly in this novel from the body of Heyer's works is that it portrays a successful union across classes. I have not yet read another one of her novels to allow this. Indeed, in Bath Tangle (read my review here), she fervently opposes such intermingling. It is as if she wanted to explore how such a relationship might be made to work, but the book's conclusion leaves one wondering if the author believed in her own end result.

The novel has a few structural problems. At the beginning, the manner of the late Viscount's death is cast into suspicion, but Heyer never returns to the issue. The third quarter of the book drags, and it would have been the perfect time to indulge in a little mystery. It is almost as if she forgot part of the storyline. There is also an uncomfortable, though thankfully brief, politically incorrect racial moment. Regardless, I recommend the book. It's a lovely departure from Heyer's usual formula, and I thoroughly enjoyed it, even though it was not as hilariously funny as Heyer's other novels. Most of the comic moments come courtesy of Jonathan Chawleigh, whose forceful and extravagant personality manifests itself in outrageous gifts to the married couple, like a shell shaped bathtub and a flock of peacocks. Good fun.
Posted by Alexa Adams at 11:24 AM