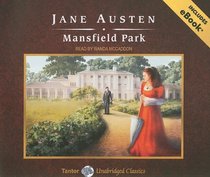 On our recent trip to Kentucky, the car ride was made far more enjoyable by the audio recording of Mansfield Park I borrowed from the library. It had been about three years since I last read the novel, and I was starkly reminded of how much I love this story and how very depressing it is when compared to Austen's other works. I could go off on my typical rant about the virtues of Fanny Price, the insufferable obliviousness of Edmund Bertram, and why the Crawfords are thoroughly deserving of their fates, but those topics have already been canvassed at length on this blog. Today I really just want to take a moment and commend Wanda McCaddon for her wonderful performance of this sadly misunderstood novel.

I am a big fan of audio books and have encountered all sorts. When selecting one, after making sure it is unabridged, my next thoughts are for the reader. A good performance makes such a difference in a recording, and Ms. McCaddon did a stupendous job with Mansfield Park. She provided just enough characterization to make the dialogue easily followable, but she did not make the frequent mistake of overacting, which is easily done on audio books. When actors get too invested in their characters, their vocal modulations go all over the place, causing a reader to have to fiddle with the volume constantly while driving (to the great horror of Secretary LaHood). One character is loud and piercing (say a Mr. Yates), while another (perhaps Fanny herself) is barely audible. But these are just examples, for Ms. McCaddon makes no such blunders. Her voice is crisp and intelligible throughout.

The other common problem I encounter are performances that attempt no character expression at all. If I wanted to listen to a reader drone on in uninspired monotony, I could listen to my Kindle.

I should mention that the disks come with an eBook, but as my copy from the library did not include this, I cannot say whether it adds any value. This Tantor Unabridged Classics recording ranges on Amazon from $25 to $40, which while not hugely expensive for an audio book, is pretty steep for something you will probably only ever use once. I suggest supporting your public library, as I will in my hunt for other Jane Austen recordings by Tantor. They have done all her novels, as well as a good smattering of Austenesque, and both Emma and Sense & Sensibility are also read by Ms. McCaddon.

Now I just need to take another ten hour or more drive.
Posted by Alexa Adams at 2:33 PM