I have decided to approach Misty's questions as a guide for my thoughts as I read and have provided my free-for-all approach to a response below, but here are the questions anyway, so that everyone can see the premise from which I meandered:

Sir Walter Elliot, of Kellynch-hall, in Somersetshire, was a man who, for his own amusement, never took up any book but the Baronetage... 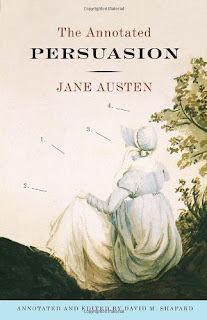 I still get chills of excitement every time I read those words. He doesn't read?! Don't you just hate the man already? I believe the first few chapters of Persuasion are the absolute best Austen ever wrote (I could say much about how I think she is better on beginnings than ends in general, but that would be far too great of a tangent to take). Why is it so awesome that the book begins with Sir Walter Elliot and the Baronetage? One reason is that it allows Austen to reveal a ton of information about her characters in an amazingly small amount of time. By the end of the first paragraph we know all the members of the Elliot family, their social status, that Lady Elliot is long dead, and that she died without providing an heir to Sir Walter, and that Sir Walter is a pompous ass. Readers have an immediate sympathy for his motherless daughters, "an awful charge rather, to confide to the authority and guidance of a conceited, silly father", and by the end of the second paragraph, when we learn that only the youngest has yet married, we feel even more sympathy for the older, remaining Miss Elliots ("Always to be presented with the date of her own birth and see no marriage follow but that of a youngest sister, made the book an evil"). We make such rapid progress in this book, and then Austen casts us into limbo, forcing us to endure the dreadfully boring Baronetage and scramble our ways into whatever plot info we can take away from it. Oh good! there is an heir - a possible hero? Yes, we readily believe vanity to be the beginning and end of Sir Walter's character. He did not marry Lady Russell, but we do have a maternal figure. Yet still we do not know who is our heroine!

Austen toys with us so masterfully in this first chapter, playing with our expectation like the virtuoso she is, building tension before defying convention. When first Elizabeth and then Anne Elliot are finally introduced, it is clear that the authoress favors the latter:

... but Anne, with an elegance of mind and sweetness of character, which must have placed her high with any people of real understanding, was nobody with either father or sister: her word had no weight; her convenience was always to give way; - she was only Anne.

Now we feel our story begins in earnest, but it is only to learn that Anne is passed her bloom and Elizabeth is very pretty, though nearly thirty. This proceeds a discourse of Elizabeth's precise situation, which is intriguing, and we begin to wonder if we misread previous hints, and Elizabeth isn't our heroine after all, especially as she appears on the surface quite like Emma Woodhouse. We end the chapter with news of financial distress, and gain no real additional information about Anne until the last paragraph of chapter three, only a steady revelation of her good sense and intelligence amidst the pompous and ignorant. Then suddenly we end on her first significant words, "A few months more, and he, perhaps, may be walking here."

Here the book goes from being about anything but Anne to nothing but Anne, and her perspective is dominant throughout the rest of the book. Though we greet the Elliots without the benefit of her good opinion, the Musgroves are entirely seen through her eyes, giving us extraordinary insight into this heroine's mind. I think Persuasion has by far the most introspective tone of Austen's novels; we have access to Anne Elliot's thoughts and feelings with an acuteness none of her other heroines achieve. I believe it was C.S. Lewis who wrote - though I have no notion where - about the psychoanalytic aspects of this novel. He made a very good point (wish I could share it), and the awareness of Anne's ego, long before Freud was even born, makes this a startlingly modern novel. Here is Austen at the height of her abilities, and she paints Anne Elliot so realistically that she could step from the pages and converse on any number of topics, from Shakespeare to the conveniences of modern plumbing.


If Anne's introduction is long and subtle, slowly revealing her inner majesty behind the facade of a wallflower, Captain Wentworth's is dynamic, like him, and comes in the form of a negative: "He was not Mr. Wentworth, the former curate of Monkford...". It is a phenomenal way to commence the chapter that finally delivers the eagerly awaited love story we knew just had to be coming, and it is particularly appropriate, for Wentworth will spend such a huge amount of energy denying his feelings. Austen creates an image of all that is amiable: confidence, ambition, and finally success combine in one idealized specimen of manhood. The next several chapters focus on the build up to the reunion between these fractured lovers. I think Misty made a a great choice in ending this segment after chapter seven, seeing us just past Anne and Wentworth's meeting, and making us stop and think about the painful blow just delivered: "Altered beyond his knowledge!" This might be the cruelest thing any Austen heroine ever has to confront in herself, for while character flaws can be addressed and dealt with, no rational person expects lost looks to be recovered. It is hard not to resent Wentworth, with his self-satisfied rejection of Anne and determined acceptance of "something a little inferior", but because he acts out of deep hurt, and because he is Wentworth, we easily forgive him.

For we know how he suffered. Every word describing his anger reflects his desperation to make sense out of his pain, attribute blame to she whom he had to give up, and vent his spleen:

He had not forgiven Anne Elliot. She had used him ill; deserted and disappointed him; and worse, she had shewn a feebleness of character in doing so, which his own decided, confident temper could not endure. She had given him up to oblige others. It had been the effect of over-persuasion. It had been weakness and timidity.

The question underlying this novel lies in this conclusion. Was Anne wrong or right to yield to Lady Russell's objections to her engagement to Captain Wentworth? At this juncture, all we can judge by is our firm knowledge that the repercussions of her decision caused even more pain to Anne than to the Captain, making the answer appear decidedly "yes". The example of he Crofts, too, who are an extremely happy couple, despite having married without fortune, reinforces Wentworth's opinion that Anne acted foolishly. Anne herself agrees, has been persuaded she was wrong:

She did not blame Lady Russell, she did not blame herself for having been guided by her; but she felt that were any young person, in similar circumstances, to apply to her for counsel, they would never receive any of such certain immediate wretchedness, such uncertain future good. She was persuaded that under every disadvantage of disapprobation at home, and every anxiety attending his profession, all their probable fears, delays, and disappointments, she should yet have been a happier woman in maintaining the engagement, than she had been in the sacrifice of it...

But the wonderful thing about the art of persuasion is that its work is never done. Events and characters introduced later in the novel will repeatedly remind us how very precarious a sailor's fortune is, and Lady Russell was quite right about the likelihood of the then Lieutenant Wentworth attaining rank and fortune, especially had he been hampered with a family. Furthermore, if Lady Russell had failed to advise Anne on this matter, would she not have been a negligent guardian? In recent years, I have become more and more convinced that Anne acted precisely right in breaking off the engagement, but I did not always think so. I'm curious to hear other answers to this question.The biggest one I am left with is why did Captain Wentworth not return to Anne when his fortune was established? As she reflects:

Had he wished ever to see her again, he need not have waited till this time; he would have done what she could not but believe that in his place she should have done long ago, when events had been early giving him the independence which alone had been wanting.

Despite all my feelings against such a conclusion, I have to lay blame for the continuation of the suffering both hero and heroine endure, regardless of who initiated, on Captain Wentworth. His childlike indignation is unproductive, and as if she has not endured enough, when he finally does return to Kellynch he seems bent on punishing her with indifference. Were he not so thoroughly charming, I could almost hate him.
Posted by Alexa Adams at 8:04 AM