It is not infrequent that Austen's characters express seemingly opposing beliefs. Today I'd like to explore the question of when a man should marry.

"I am an advocate for early marriages, where there are means in proportion, and would have every young man, with a sufficient income, settle as soon after four-and-twenty as he can."

"Only four-and-twenty. That is too young to settle ... [thirty] is as early as most men can afford to marry, who are not born to an independence." 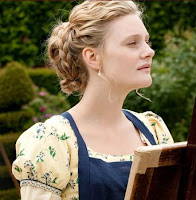 These sentiments might seem contradictory, but they are actually quite akin, as are the characters themselves. The difference in their notions is more a reflection of the listener each is attempting to influence than of some philosophical disagreement. In fact, one would be hard pressed to find two characters more alike in Austen than Sir Thomas and Miss Woodhouse, gender distinctions aside. Both are infinitely confident in their elevated social positions, both cling to the importance of upholding those distinctions that privilege themselves, and in a spirit of well-intentioned condescension, both manipulate their subordinates to no good end. This latter quality is what we see on display here. When striving to convince Fanny Price to accept Henry Crawford, Sir Thomas sees his age as being a strong factor in his favor, but when Emma wants to dissuade Harriet Smith from Robert Martin, she designates that same age as problematic. Granted, the key issue here is economics, and while Henry Crawford has "sufficient income", Robert Martin was not "born to an independence". Both Emma and Sir Thomas have strong grounds upon which to promote their arguments, but we must assume that they would be equally adroit in promoting the other perspective should it have suited their aims, especially as events prove both equally wrong.

I think Austen is trying to tell us that there is no one perfect age for a man to marry, and when we hear someone make vast generalizations on such subjects, we had best consider their motives before heeding their advice.