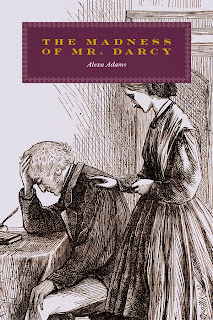 And still going! Having proved to myself last year that I could write 50,000 words in a month, even unprepared and immensely distracted, I went into NaNoWriMo this year planning to write twice as much as the event calls for, and I'm in good shape to reach my 80 to 90,000 word goal, if I can keep up the pace.

Anyway, in the hopes of maintaining my momentum, I'm providing another little snippet of The Madness of Mr. Darcy for your reading pleasure (I hope). It helped SOOOO much to receive the comments I did on the previous segment I shared with you. Thank you so much! I could really use another bout of encouragement to help finish the novel before the end of the month.

Actually, I am pretty close to the end of the novel. I have to get Elizabeth and Darcy to Pemberley, wrap of Mr. Wickham's part in the story, and wish them all happily ever after. This is a scene I wrote this morning, and as before it is VERY rough. I plan to get my next tens of thousands of words in going back over the bones and fleshing out what I have already written, which is rather like an overly detailed outline. Anyway, hope you enjoy it:

When the door was safely secured behind him, Sir Frederick confronted the still shrieking countess and said, “Lady Anne!” in a commanding enough voice to silence he. “I see you’re upset, but I cannot have you causing such disruption at Ramsey House. Did you not consider what such a commotion might do the equilibrium of my guest?”

She blanched a bit, but replied stiffly, “You told me, Sir Frederick, that the residents of this establishment were docile and disinclined to violence! But then again, you also said my cousin would be keeping genteel company while he resided with you, and so how am I to know the extent of your lies!”

“All the representations I made of my establishment to you at Rosings this summer were perfectly accurate,” he defended himself, his indignation rightfully aroused. “I resent your implication otherwise!”

“Resent it if you must! The facts of the matter is that this woman is known to me of old. I have been privy to entire scandal surrounding her unfortunate sister, and this is the women in whom you entrust the care of young, disturbed ladies! I think if their families knew her history, they would not trust you with their loved one’s care.”

“Anne!” Darcy commanded her attention. “This is intolerable! You have absolutely no notion of what you are talking about!”

“I do indeed know, Darcy! Do you think I could forget a scandal that so affected my mother’s own rector!”

“My cousin Collins always was a fool, Lady Anne,” Elizabeth replied tartly, determined to defend herself. “I’m surprised you would heed anything he said. I thought you had better sense.”

“I will not be spoken to by such a creature,” came the piercing reply, shrieked with such vehemence that Elizabeth stepped backwards, where she gratefully found the comfort of Darcy’s supportive arms.

“Lady Anne,” Sir Frederick intervened, “You speak of events long in the past, and that were never of Mrs. Bennet’s doing. It is unfair, even cruel to attack her in such a manner. There is much you do not know of her history, and I will swear to it that I know of no one so qualified for the role she undertakes here.”

“Then I’m surprised you are so eager to part with her,” the countess scoffed, “let alone countenance an affair between a patient and a member of your staff!”

“Enough, Anne! We’ve spoken jokingly of your channelling your late mother, but you have surpassed even her excessive pitch of officious irrationality!”

“My mother was never so provoked! She would not stand for such usage,” her voice cracked with emotion, and her eyes welled with tears, “I demand you pack your things and leave with me at once, Darcy!”

He sighed wearily, but did not move, “What even brings you here, Anne?”

“I received a letter from a lady in residence here, with whom I am acquainted. She thought it her duty to inform me of your dalliance, which I wanted to dismiss as ridiculous, until I received a letter in your own hand declaring your intention of marrying Elizabeth Bennet! Of all people! And writing it as if it were a rare treat you had in store for us all. You are madder than I ever imagined, Darcy!”

“That letter was addressed to his lordship,” Darcy angrily replied. “Why did you receive it?”

“The earl is in London on business, and I was authorized to attend his pressing correspondence.”

“And a personal letter from cousin to cousin is now to be considered urgent!” he angrily replied. “Fitzwilliam would not like to know what you have done, Anne.”

“I do not care what he wants! Surely he would welcome this harlot into our family as if she were a countess, for he is just such a fool, but I will not! If you pursue this ludicrous plan of yours, Darcy, no one will receive you in society. I will expose what has happened here at Ramsey House in a most public fashion, and all of you will end in disgrace!”

“Do not make threats that you have no intention of acting upon. I care not a fig for what society thinks anymore, but you do and will do everything in your power to prevent any hint of scandal regarding anyone with whom you are associated getting abroad. I know it was chiefly you who was responsible for hushing up my actions of last winter, interfering on my behalf to keep the proceeding as quiet as possible. Well, you shall just have to put your best effort into this, as well, for I am going to marry Mrs. Bennet, and I care not what you think of it! If I had done so twenty years ago, my life would have been a very different thing, and neither you, nor anyone else, shall prevent us from finally achieving the happiness we both deserve.”

“Bravo,  Mr. Darcy.” Elizabeth said supportively, standing beside him in determined resistance against any further obstacle that dared to stand in their way.

“It is impossible!” protested a suddenly quieter Lady Anne. “Think of what people shall say! Do consider what you do Darcy! Even if everyone else has forgotten Lydia Bennet years ago, there is no hiding that Mrs. Bennet works for a living, and in such a place! Are the shades of Pemberley to be thus polluted!” she concluded in mournful tones, her gaze directed at no one in particular.

I'm such a sucker for the shades of Pemberley. Thanks for reading!
Posted by Alexa Adams at 10:20 AM