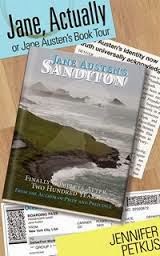 I admit to embarking on this book with a great deal of skepticism. I only bought it because it was available for free on Kindle at the time, and I needed reading material for my tip to San Francisco. Even then, I read every other book I had purchased for the occasion before (somewhat reluctantly) finally beginning this one. The introductory material seemed to justify my concerns: the ghost of Jane Austen communicating through the internet? Really? But then I got hooked ...

Jane, Actually or Jane Austen's Book Tour is premised on the notion that the afterlife, a maddeningly isolated state. has been scientifically proven, and a form of electronic communication, the AfterNet, constructed to allow the countless disembodied souls floating aimlessly through eternity to communicate with the living and each other. The idea is a bit farfetched, I know, and distinctly creepy (I can just imagine the NSA enlisting dead agents, a level of paranoia that the author, Jennifer Petkus, does not explore in this volume), but the notion of being able to communicate with the real Jane Austen is so unbelievably exciting that all my concerns and doubts were quickly swept away. Ms. Petkus does an admirable job of bringing Austen to life (excuse the term), while accounting for the experiences she must have encountered in the 200 years since her death. This is no longer a quiet country spinster, as much as her handlers strive to maintain that image. She has been on battlefields, travelled across the globe, and has a decided technology addiction (it is her only way of communicating, after all). Nevertheless, her portrayal is both believable and cozily familiar. The premise of the book focuses around the launch of her new book, a completed Sanditon. She uses an avatar (a paid actress named Mary Crawford, ironically) in order to communicate directly with an audience, and perhaps my favorite part of the book is her Keynote address at JASNA's AGM:


A well-known photo appeared on the screens showing a woman in Regency dress lounging by a pool with a cordless phone in her hands.

"This photo is so last century," Mary said with a sigh. "Look at the size of that cordless phone. I really must have a new picture taken."

This book is like a love letter from Jane to her Janeites. She forgives our trespasses on her work, even thanking us for them. In return, she's pretty much precisely what we wish her to be. There are many cameos by real Janeites, though at times the names have been changed to protect the innocent. As exciting as Jane's character is, the society of those around her is what keeps the story moving. She develops relationships with a wide swarth of humanity. There's Mary Crawford, the struggling actress, Melody Kramer, her gay agent and best friend, Dr. Alice David, Jane's internet nemesis, and many more, but the most important, I would argue, is Albert Ridings, her dead friend, who does not know she is the "real" Jane Austen but enjoys lively debates about her work online. Oh yes! Ms. Petkus provides Jane with a hero, and a most appropriate one, I think:


All this was new to Albert, this dissection of Austen. He had enjoyed Austen since his discovery of her while in hospital. His memory was that he held Persuasion in his hands as he drew his last breath, and that he died without the knowledge of the reunion of Anne Elliot and Captain Wentworth. It was not until two years later that he could confirm their happiness and it was one of the few joys he could remember from those dark days.

It was understandable than, that his enjoyment of Austen was uncritical. She gave him joy and beauty at a time when he languished in the hell of the trenches and finally as he lay dying in the influenza ward. And over the decades, he had reread those six novels when ever he found someone enjoying them. He recalled the joy of finding someone reading Austen for the first time and enjoying her; and the misery of some dull elf reading her who did not understand her and did not appreciate her beauty.

The one part of the book I did find a bit lacking was the part from which I was anticipating deriving the most enjoyment: readings at book signings of the completed Sanditon, the launch of which drives the story. Ms. Petkus was working at a disadvantage here, as "Another Lady" has already completed Sanditon in a most satisfying manner (it is my absolute favorite piece of Austenesque literature). While Jane, Actually does not strive to actually provide a completely realized plot to Austen's last, unfinished novel, I couldn't help but compare the scenes shared with those of Another Lady's. I'm afraid anyone who takes on Sanditon in any manner will always be compared to the standard already set. It's not quite fair, I know, but it is the truth.

I highly recommend this amusing portrayal of ourselves, the Janeites, to ourselves. We deserve this gratifying romp with our idol through the modern world, and I thank Ms. Petkus for facilitating the experience. I will certainly return to enjoy it again.
Posted by Alexa Adams at 9:11 AM