Return to Longbourn by Shannon Winslow 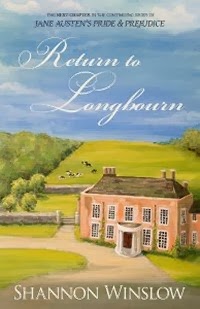 Now to compensate for my very paltry attempt at reviewing The Darcys of Pemberley! Return to Longbourn is the continuation to that story, taking on Mary Bennet as heroine. Let me just state up front, lest there be any confusion, that I've read my share of Mary stories, some very good, but this is by far my favorite. Shannon Winslow has remained rigidly true to Austen's original character while transforming her into a romantic heroine of the highest degree. If anyone doubts that Mary has the potential for a fairytale princess ending, let the fact that she has no less than three dashing suitors for her hand prove the point. This veritable miracle is achieved by Ms. Winslow looking not to Austen for her inspiration but Charlotte Bronte, whose influence is unmistakable in this tale of a governess.

That's right. Rather than remain a burden to her family (and perhaps just to escape them), Mary engages herself as governess to the new family residing at Netherfield: the Farnsworths. Leaving the colorful clothes and social engagements her mother forced upon her behind, she dons the subdued hues and quiet manners of the genteel servant. It's a welcome escape from notice and attention for Mary. Instead of being in the spotlight as she marches towards spinsterhood, she has guarded herself against such humiliations. Now she gets to sit and observe humanity, studying the characters of her fellow humans as assiduously as her father and sister ever did. Her observations are no longer mundane or pedantic, and following the death of Mrs. Farnsworth, she has the entire family's well-being to attend: a task for which she proves uniquely qualified.

Like the first book in this series, Return to Longbourn begins with a death: this time Mr. Bennet's. Mrs. Bennet's fear of the hedgerows is addressed by the appearance of Mr. Tristan Collins, returned from America upon learning of his inheritance, whom she quickly decides ought to marry Kitty. Kitty, fearing another Mr. Collins, flees to Pemberley to avoid him, an arrangement which proves agreeable to Mary, for Tristan in no way resembles his brother, and in his friendship she begins to experience the foundations for joy:


They were just passing the tree-lined lane for Lucas Lodge, when suddenly the clouds united over their heads, and a driving rain set full in their faces. There was only one thing to be done, to which the exigence of the moment gave more than usual propriety; it was that of running with all possible haste back the way from which they had come. Laughing, Mr. Tristan grasped Mary's hand without warning and compelled her along the road at a gallop. She held her skirt, put her head down, and raced along at his side, drawing deep draughts of the freshening air into her lungs as she went.

On they ran in unison, stride for stride. Neither of them proved fleet-footed enough to outstrip the rain, however, and they ended huddled together on the front porch of Longbourn, soaked clean through.

Mary's long repressed and controlled emotions slowly begin to relax, increasing both her vibrancy and vulnerable. It is in this style of character development that the influence of Jane Eyre is primarily felt, though the fact that she works as a governess for a family that has a secret certainly helps. The rather one-dimensional Mary Bennet Austen gave us is totally reborn as a woman of immense passion, but I am thankful to acknowledge that when this heroine, heartbroken and guilty, flees the house of her employer, she at least remains cognizant enough to not misplace her purse. Fear no near-death scenes on frozen Moors, madwomen in the attic, or maimed heroes. Ms. Winslow doesn't stray so very far away from Austen's two inches of ivory. Had she dared, I suspect her Mary would have proven resistant to such theatrics.

I absolutely adore this rendition of Mary Bennet and have been in raptures over her for weeks. I could not put the book down until I learned her fate, which remains remarkably mysterious for the bulk of the story. Do not miss this book! Return to Longbourn is an essential read. I look forward to doing so again and again.


This is my twelfth review for The Pride and Prejudice Bicentennial Celebration 2013, hosted by Austenprose. Please see my others below:

The Darcys of Pemberley by Shannon Winslow
Posted by Alexa Adams at 9:00 AM