The Darcys Of Pemberley by Shannon Winslow 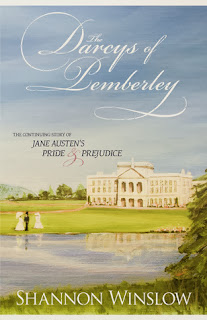 So I've been hearing a lot of buzz about Shannon Winslow's newest novel, Return to Longbourn (which I will review next), but I wanted to read the first story in the series before embarking on it. I purchased a copy of The Darcys of Pemberley and started cruising through the story, only to suddenly realize about a third of the way through that I had read it before, in the days before I started blogging, when I consumed such a constant stream of Austenesque that some of the stories got lost in the mix. I'm sorry to say this was one (though I have my theory why it did), for it is a sweet tale and worth reading. I enjoyed the revisit.

The book begins with Mr. Collins' death (a supplementary account of which can be read in the short story, Mr. Collins's Last Super). The Darcy's have been married long enough for Elizabeth to be confident in her role as Mrs. Darcy, although some, like Lady Catherine, have still not come to grips with the fact. Love and prosperity treats former Bennets well, and both Elizabeth and Jane are reaping the daily benefits of heir marriages. The only real bane to contend with is the Wickhams, who have a tendency to assert themselves at the most inconvenient time, and the challenges we all face in married life.

The novel provides a gratifying glimpse into what life at Pemberley must have been for the Darcys: entertaining their neighbors, guiding Georgiana into society, and relishing their mutual affection. However, conflicting forces arise that threaten the harmony of Elizabeth and Darcy's relationship. On Elizabeth side, there is Georgiana, who confides in her what she cannot repeat to Darcy, and on his side, there is Wickham, still adept at manipulating his former friend and capitalizing on his insecurities. The great tension of the novel derives from Wickham's machinations, and while effectively done, it is this that probably denied the book a distinct place in my memory. So many of the books I read at the time involved an evil Wickham threatening the security of Pemberley. That does not diminish what is unique in this version, but it did help it to blend with the other books in my mind.

It seems this review is going to be shorter than I'd like, but my thoughts keep straying to Return to Longbourn (my review of which I will post later this week), about which I'm much more enthusiastic. As previously stated, The Darcys of Pemberley is a sweet tale, providing lots of gratifying time in the Darcys' most felicitous company. It is also well-written while maintaining a solid pace, and I recommend it to those who never get enough of Pemberley (I'm one of them!), and as an introduction to the continuation, which is, unfortunately, stealing the thunder of its precursor. That seems a bit lukewarm, I know, but please trust it is due to the second book's triumph, rather than something lacking in the first.


This is my eleventh review for The Pride and Prejudice Bicentennial Celebration 2013, hosted by Austenprose. Please see my others below:

Pirates and Prejudice by Kara Louise
Posted by Alexa Adams at 9:51 AM