Ruminations on and a story of Sense and Sensibility

This post, or something very like it, was first published in the summer of 2018. It has been updated to reflect current happenings 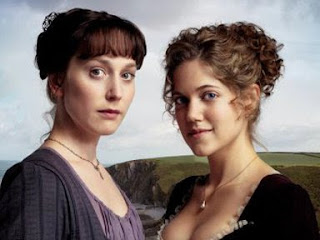 It’s so tempting to interpret Sense & Sensibility through the lense of its title, even more so than Pride & Prejudice. Yes, Elizabeth is prejudice and Darcy is proud, but there is some muddling of the lines, whereas Elinor is all sense and Marianne is total sensibility. Furthermore, Austen’s exploration of this polarity fits so beautifully into the context of Romanticism (somewhat ironically, as it implicitly rejects some of the movement's core precepts). Of course, the dynamic between the two sisters isn’t entirely black and white. Marianne will eventually be swayed by sense and Elinor is proven far from a cold fish. Feelings are not incompatible with reason, as she so eloquently argues:

If you can think me capable of ever feeling–surely you may suppose that I have suffered now. The composure of mind with which I have brought myself at present to consider the matter, the consolation that I have been willing to admit, have been the effect of constant and painful exertion;–they did not spring up of themselves;–they did not occur to relieve my spirits at first.–No, Marianne.–then, if I had not been bound to silence, perhaps nothing could have kept me entirely–not even what I owed to my dearest friends–from openly shewing that I was VERY unhappy.

It’s a conversation I have with my mother quite often.

The funny thing about that is that I am usually on the side of sense and my mom sensibility. This is amusing because the other temptation I find myself succumbing too when analyzing this text is dismissing Marianne’s behavior as adolescent. It’s an argument I’ve made far too many times to count, and I rather wish I hadn’t. As I grow older it becomes more and more apparent that some people are less able (or less willing, some might insist, to attempt) to constrain their feelings. If this is not merely a characteristic of youth but a defining personality trait, then despite Marianne’s best intentions, she will never succeed in regimenting herself into pragmatism. Even in her old age, she will continue to be subject to the whims of emotion. I dwell on this thought now having just reread a story I wrote well over a decade ago about Marianne’s engagement to the Colonel. I’m glad that even at a time in my life when I was quite dismissive of Marianne, I understood this about her character.

The story is part of the collection “And Who Can Be in Doubt of What Followed?”: The Novels of Jane Austen Expanded, extending the ending of each of Austen’s six novels in accordance with those hints and explanations she so quickly flies through in her closing chapters. Here is a favorite scene, just to give you a taste:

Elinor used the opportunity afforded by the Dashwoods’ visit to reaffirm her relationship with her brother, knowing it was what her father would wish. They often walked together in the mornings, when Edward’s parish duties kept him occupied, and as Fanny was no walker, here was ample time for the siblings to share confidences. It was on one such occasion towards the end of his stay that John, as they passed by the gates of Delaford House, began the following soliloquy:

“I will not say I am disappointed, my dear sister. That would be saying too much, for certainly you have been one of the most fortunate young women in the world, as it is. But, I confess, it would give me great pleasure to call Colonel Brandon brother. His property here, his place, his house, everything is in such respectable and excellent condition! And his woods! I have not seen such timber anywhere in Dorsetshire as there is now standing in Delaford Hanger! And though, perhaps, Marianne may not seem exactly the person to attract him, yet I think it would altogether be advisable for you to have them now frequently staying with you, for as Colonel Brandon seems a great deal at home, nobody can tell what then may happen. When people are much thrown together, and see little of anybody else — and it will always be in your power to set her off to advantage, and so forth; in short, you may as well give her a chance. You understand me.”

Elinor had the grace to betray neither her own hopes in this direction, nor any shame for her brother. It was not until John renewed the subject with his wife on their journey home to Norland that his hopes received any encouragement

“I would not be surprised if that is precisely how matters unfold,” Fanny declared, having heard him out. “Our next visit to my brother will surely find us staying at the great house.”

“But do you think Marianne could attract a man like Colonel Brandon? A year ago, perhaps, but having lost her bloom, I see nothing but the convenience of her company to entrance him. I have suggested to Elinor that she would do well to throw them together quite often.”

“You miss a great deal, John! Marianne has fully recovered her looks, and with her disposition so vastly improved, I think her prospects better than ever. Her manners used to be impertinent — never a characteristic to endear a potential husband — but she has grown quite presentable. Furthermore, she seeks out the Colonel with surprising regularity, his library being her excuse. I am rather shocked your mother allows it, but she never was able to regulate the conduct of her daughters. Even were such advantages not hers, you must see that when any comely young lady sets her sights in the direction of an aging bachelor, one should not bet against her success.”

John, as usual, was quite pleased to embrace his wife’s perspective. “Indeed? I think you might be right, my dear. What a match! What timber! Did you take the time to properly observe the hanger?”

“Who could not? It is a vast deal more than Marianne has any right to expect, but I always did think your sisters would do well for themselves. I suppose we must have the entire family to Norland soon.”

The book is available for purchase on Amazon. Thanks for reading!
Posted by Alexa Adams at 6:00 AM

Labels: And Who Can Be In Doubt Of What Followed?, excerpt, Jane Austen, Original Fiction, Sense and Sensibility, Short Stories