As previously discussed, I have resumed work on an absolutely insane story started ten years ago. In a moment of madness, probably inspired by the tale, I volunteered to read from it for the next JAFF Reader/Writer Get Together WIP meetup on July 17th (you can sign up here: http://jaffwriterreadergettogether.org/). I'm not really sure what compelled me, but I have made a commitment, and I must follow through. The thing is, I am not the best at public readings, and this story is so weird that I really have no idea which part is best to read. The following excerpt is probably the most obvious to choose, because it kind of (sort of) explains a lot of the story, but it is also dialog heavy, and that is exactly where I tend to read too fast and lose my audience. I am, therefore, posting it here in an attempt to eliminate it from the contest. It can still be my fallback option. If you like what you see and want to read more, I am posting the story at A Happy Assembly. Please do come by and read along: https://meryton.com/aha/index.php?/topic/22136-a-mixed-up-mash-up/.
To get an idea of just how wild this tale is, I have drawn this rough map to keep track of the characters. I keep adding to it as the story develops, and I have a beta reader who does beautiful watercolor work and has agreed to remake it pretty for me, should I end up publishing this story. That remains uncertain. First, I need to see my way through this mess I've created. Enjoy! 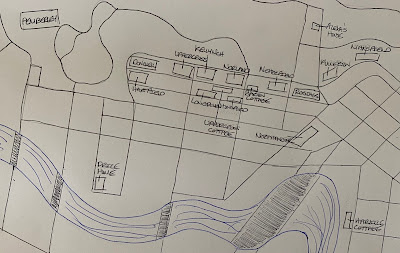 He frowned. "You are not Miss Bennet."