Five ways in which the Regency rocked

The following was originally posted in 2015 and now feels rather dated, but it still makes me smile. I hope it will do the same for you, dear reader.
There is a certain class of people who, upon learning of my Jane Austen obsession, feel the need to explain why the modern world is superior to that of the Regency. “But the 19th century was a terrible place to live! Women didn’t have any rights, most people lived in squalor, and you were lucky to survive your infancy!” Of course I realize that Jane Austen’s world was not just one of manor homes, top boots, and ladies maids (I do spend three months in Portsmouth with the Price family every time I read Mansfield Park). I have a massive appreciation for modern plumbing, medicine (especially the medicine!), electricity, and something resembling gender equality, but that does not mean that there are not ways in which the Regency period was superior to our current era. I am working on a novel entitled Being Mrs. Bennet, in which a modern woman, following a car crash, finds herself inhabiting the body of probably the worst mother Austen ever foisted upon heroine. Alison Bateman finds much of the early 19th century disconcerting, but she also discovers aspects to treasure. One can adapt to almost anything.

I planned this post to be a list of reasons why the Regency remains superior to the modern world. I intend this list to be egalitarian, so it does not include privileges and luxuries that belonged to the upper classes alone, and I confess: it was rather difficult to make. It started out as a top ten, then narrowed to a top eight, etc, until finally levelling out as the top five reasons why I think Jane Austen’s world was superior to ours. Enjoy! 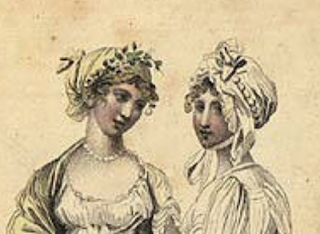 A married woman used to wake up in the morning and plop a frilly cap on her head. Hairdressing done. I call the cap the Regency equivalent to the ponytail in Being Mrs. Bennet, and it is true, but how many of us actually get to wear that ponytail to work? Thanks to makeover shows, a ponytail is derided as boring and lazy, where as a cap could be fashionable and even becoming. Somewhere in the course of women’s liberation, we messed this one up. 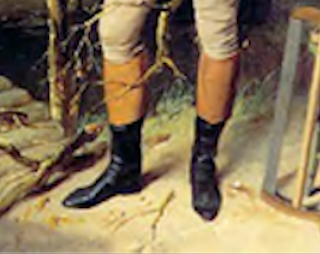 You couldn’t share shoes with your friends and relations back in the day. Each shoe was made for and molded to a particular foot. Today you can buy handmade Italian leather shoes for somewhere in the range of $1000 a pop, but this buttery and luscious feel of slipping your foot into such a concoction used to be much more accessible. Of course men’s boots, those of both the laboring classes and the gentry, would be made of sturdier stuff that needed to be broken in, but once that first round of blisters healed you had a shoe that hugged the contours of your feet perfectly. 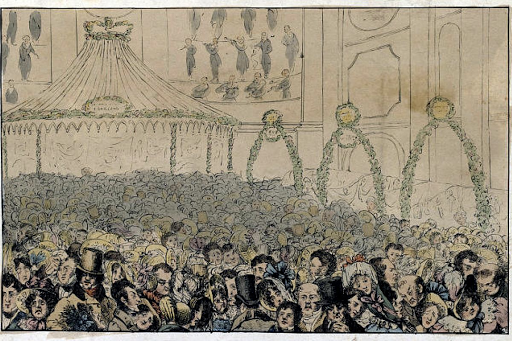 One need not be a mogul to attend the theater in the Regency Era. Even the most lavish venues had seats cheap enough to accommodate the working classes. Now even our sporting events are beyond the reach of many, television having rendered live entertainment a luxury item. Sigh. 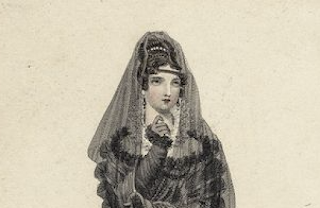 Having been to more than my fair share of funerals lately and experienced mourning rituals ranging over a wide swath of cultural and religious beliefs, I really think it would be nice to have not an imposed period of mourning (that would be far too stifling), but the broadly recognized need for a person to step outside their normal activities and take the time to grieve. I also like the idea of wearing all black, or having some other, external signifier of grief, so that others know to approach you with care, preferably without looking like an overgrown Goth kid. I also like that they had gradations of mourning. Black ribbons in my hair would have been perfectly appropriate for my cousin’s death last year, while my grandfather’s loss made me crave bombazine and a heavily veiled bonnet. Can’t wear that to the supermarket! 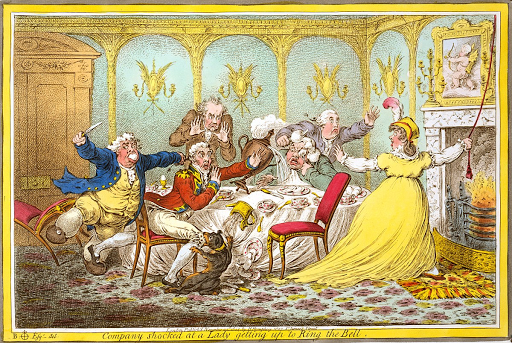 While some of the imposed social rituals of the 19th century, like calling cards, are archaic in our modern world of cell phones, they represent a code of behavior designed to help humans interact with each other in a peaceful and orderly manner. We’ve lost a lot of that. I could really go on and on with this topic, which would end up being preachy, at best, so I’ll just beg each reader to hold the door for someone, wait for others to exit before you enter, and say excuse me when you step in someone’s path. The world could be such a happier place.

There you have it! What is your favorite thing about the Regency Era? Anything you would gladly trade for today? Or has Jeanna inspired any one else to confess their closely held secrets to the world?