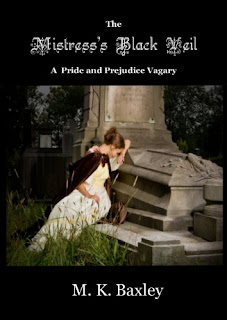 Now had I read such a synopsis before buying this book, I would never have made the purchase, and as I began to read and discovered what the plot actually was, I admit to fearing for the very worse. But besides a few scenes, the storyline really isn't as lewd as you would expect, especially considering the subject matter. I have read many far more sexualized Pride and Prejudice reimaginations that follow much more innocent story lines. I was actually rather impressed by how Ms. Baxley took these dramatically altered circumstances and manipulated them so that the course of Darcy and Elizabeth's relationship remained remarkably true to the original tale. That being said, the obviously episodic writing of the story (I believe it was first published at A Happy Assembly) was a little frustrating. Each chapter begins and ends with a first person narration recap and conclusion, while in between the level of dramatic content almost overwhelms. Putting that aside, I was pretty entertained. I read the book in a single day, it was light and compelling, and it succeeded in keeping my mind off the elephant in the room - my enormously bulging belly. If you enjoy darker and more sexual Pride and Prejudice retellings, you will probably greatly enjoy this book. If the notion of Elizabeth selling herself to the highest bidder makes you want to scream, I would probably look elsewhere for your next read. With so many great "What if?" stories out there these days, we readers have the luxury of picking and choosing precisely those which cater most to our individual tastes.
Posted by Alexa Adams at 7:42 PM