Half way through and sticking to my schedule, so far. We'll see how I manage once exhaustion starts to kick in. I haven't had time to edit these post at all. I'm sure they are riddled with mistakes, and my spelling is sure to only get worse.

Chapter thirty sees Sir William's departure, and Mr. Darcy and Colonel Fitzwilliam's arrival. Charlotte immediately begins to see those same signs of interest in Mr. Darcy for her friend as she noted in Hertfordshire. Interestingly, while Elizabeth still tells herself how little she wants to see him, she obviously anticipates his coming:


Elizabeth had heard, soon after her arrival, that Mr. Darcy was expected there in the course of a few weeks, and though there were not many of her acquaintance whom she did not prefer, his coming would furnish one comparatively new to look at in their Rosings parties, and she might be amused in seeing how hopeless Miss Bingley's designs on him were, by his behaviour to his cousin, for whom he was evidently destined by Lady Catherine; who talked of his coming with the greatest satisfaction, spoke of him in terms of the highest admiration, and seemed almost angry to find that he had already been frequently seen by Miss Lucas and herself. 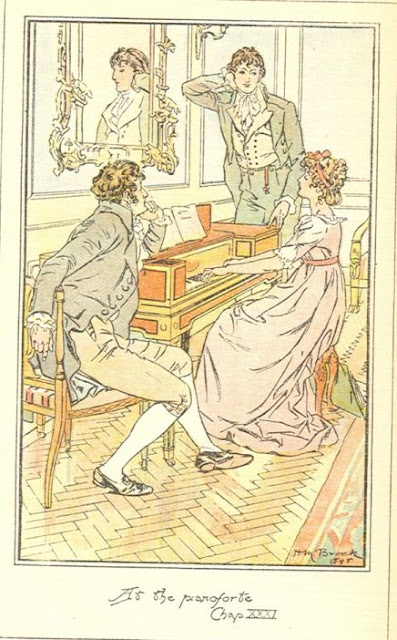 Chapter thirty-one brings the parsonage party to dine at Rosings for the first time since the arrival of the gentlemen. While Mr. Darcy begins the evening giving his attention entirely to his aunt, he is soon drawn to Elizabeth's side, unable to allow Fitzwilliam to monopolize her company. The scene is prettily captured H.M. Brock (again, the image comes from Mollands.net, a fabulous resource for Janeites).


"You mean to frighten me, Mr. Darcy, by coming in all this state to hear me? But I will not be alarmed though your sister does play so well. There is a stubbornness about me that never can bear to be frightened at the will of others. My courage always rises with every attempt to intimidate me."

"I shall not say that you are mistaken," he replied, "because you could not really believe me to entertain any design of alarming you; and I have had the pleasure of your acquaintance long enough to know, that you find great enjoyment in occasionally professing opinions which in fact are not your own."

This exchange is remarkably similar to that conducted between them at Netherfield in chapter eleven, Mr. Darcy echoing his previous observation that Elizabeth's playfulness leads her to say things she doesn't really mean. She must take his comment as continued criticism, and as her own flirtatiousness  continues to elude her, she remains absolutely blind to his true interest. Even when Charlotte declares he must be in love with her, following his private visit with Elizabeth in chapter thirty-two, she still refuses to give the notion any credence.

I love the tete-a-tete that takes place between Darcy and Elizabeth, because it so beautifully reveals how much they are proceeding at cross-purpose. Elizabeth is surprising frank and confidential in her opinions of the Collins' marriage, a familiarity which seems to open the door for his decreased formality when he declares: "You cannot have a right to such very strong local attachment. You cannot have been always at Longbourn." Such an outburst is totally uncharacteristic of the man, and foreshadows his upcoming declaration.

Interestingly enough, and though Elizabeth can give no response, Mr. Darcy is absolutely correct. Elizabeth has obviously spent a great deal of time in town with her Aunt and Uncle, who have had great influence in forming her mind. 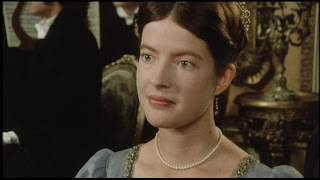 Some last thoughts on the closing of chapter thirty-two, in which we see Charlotte making the same mistake as Elizabeth before her: assuming her own sentiments are shared by her friend. She also reveals her her mercenary nature, as she clearly calculates in what ways her friend's marriage might benefit herself:


She had once or twice suggested to Elizabeth the possibility of his being partial to her, but Elizabeth always laughed at the idea; and Mrs. Collins did not think it right to press the subject, from the danger of raising expectations which might only end in disappointment; for in her opinion it admitted not of a doubt, that all her friend's dislike would vanish, if she could suppose him to be in her power.

In her kind schemes for Elizabeth, she sometimes planned her marrying Colonel Fitzwilliam. He was beyond comparison the pleasantest man; he certainly admired her, and his situation in life was most eligible; but, to counterbalance these advantages, Mr. Darcy had considerable patronage in the church, and his cousin could have none at all.

Regardless of what the reader might think of Mrs. Collins' morality,  we must credit her with a great deal of insight, for generally she proves the most apt judge of character of anyone in the book.
Posted by Alexa Adams at 11:55 AM