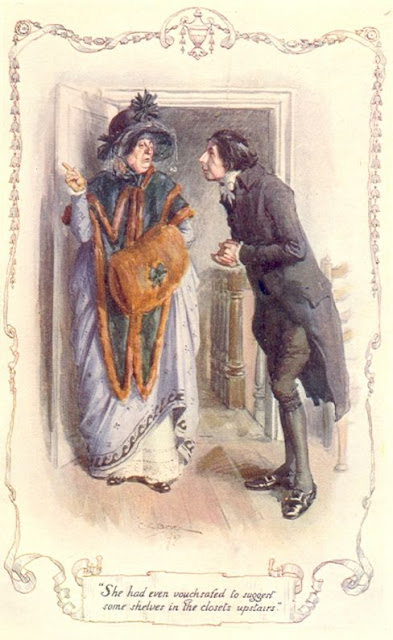 It's hard not to love Mr. Collins. He brings so much comedy to the plot. He is overshadowed, however, in chapter fourteen by the mere specter of Lady Catherine, who may be even funnier. Together, they are two of my favorite characters in the book. Both are absolutely delightful in their horribleness. Here's another image by C.E. Brock:


She had even condescended to advise him to marry as soon as he could, provided he chose with discretion; and had once paid him a visit in his humble parsonage; where she had perfectly approved all the alterations he had been making, and had even vouchsafed to suggest some herself, -- some shelves in the closets up stairs.

Every time I read an Austen novel,something strikes me in a new and different way. Today (or is it still tonight?), I feel particularly aware of the presumption with which Mr. Collins comes to Longbourn. It seems safe to assume, based on the collective response of all the Bennet sisters but Mary, that Mr. Collins is not popular with the ladies. It becomes clear that his planned atonement for being the heir of Longbourn, which Elizabeth mocked after hearing his letter, is really more about securing for himself a convenient wife than making restitution. Austen's pen drips with sarcasm here:

Having now a good house and very sufficient income, he intended to marry; and in seeking a reconciliation with the Longbourn family he had a wife in view, as he meant to chuse one of the daughters, if he found them as handsome and amiable as they were represented by common report. This was his plan of amends -- of atonement -- for inheriting their father's estate; and he thought it an excellent one, full of eligibility and suitableness, and excessively generous and disinterested on his own part.

What's truly galling is that his expectations are not unfounded, falling well within the boundaries of what most people in this society would find appropriate. Gross.

The introduction of Mr. Collins and all his ridiculousness stands in sharp contrast to the first meeting with Mr. Wickham in chapter fifteen. The man seems everything Mr. Collins is not. Of course, this is the chapter which also bears witness to the cold greeting between Mr. Darcy and Wickham, which is what readers typically remember of it, but I'd like to pay some attention to Mrs. Phillips introduction instead. We first see her vulgarly hanging from her window, yelling into the street. She then provides us with this wonderful glimpse into the workings of small town gossip, which plays such an important role in the book:


Mrs. Philips was always glad to see her nieces, and the two eldest, from their recent absence, were particularly welcome, and she was eagerly expressing her surprise at their sudden return home, which, as their own carriage had not fetched them, she should have known nothing about, if she had not happened to see Mr. Jones's shop boy in the street, who had told her that they were not to send any more draughts to Netherfield because the Miss Bennets were come away, when her civility was claimed towards Mr. Collins by Jane's introduction of him.

Having established her enjoyment of the same pursuits that occupy the two youngest Bennets, but not having the excuse of youth, the chapter ends with this assesment of Mrs. Phillips character:


Mr. Collins, on his return, highly gratified Mrs. Bennet by admiring Mrs. Philips's manners and politeness. He protested that except Lady Catherine and her daughter, he had never seen a more elegant woman; for she had not only received him with the utmost civility, but had even pointedly included him in her invitation for the next evening, although utterly unknown to her before. Something he supposed might be attributed to his connection with them, but yet he had never met with so much attention in the whole course of his life.

If the reader was left in any doubt as to the value of Mr. Collins' opinions before, they can now be assured of their utter worthlessness.
Posted by Alexa Adams at 5:56 AM