Mr. Bennet sticks to his philosophy:


He had never before supposed that, could Wickham be prevailed on to marry his daughter, it would be done with so little inconvenience to himself as by the present arrangement. He would scarcely be ten pounds a year the loser, by the hundred that was to be paid them; for, what with her board and pocket allowance, and the continual presents in money which passed to her through her mother's hands, Lydia's expences had been very little within that sum.

That it would be done with such trifling exertion on his side, too, was another very welcome surprise; for his chief wish at present was to have as little trouble in the business as possible. When the first transports of rage which had produced his activity in seeking her were over, he naturally returned to all his former indolence.

Friends, neighbors, and gossips prove just as good-natured as ever:


The good news quickly spread through the house; and with proportionate speed through the neighbourhood. It was borne in the latter with decent philosophy. To be sure, it would have been more for the advantage of conversation, had Miss Lydia Bennet come upon the town; or, as the happiest alternative, been secluded from the world in some distant farm house. But there was much to be talked of in marrying her; and the good-natured wishes for her well-doing, which had proceeded before from all the spiteful old ladies in Meryton, lost but little of their spirit in this change of circumstances, because with such an husband, her misery was considered certain.

And life begins to resume its cstomary patterns. Elizabeth now has leisure to fully repent the loss of Mr. Darcy:


What a triumph for him, as she often thought, could he know that the proposals which she had proudly spurned only four months ago, would now have been gladly and gratefully received! He was as generous, she doubted not, as the most generous of his sex. But while he was mortal, there must be a triumph.

She began now to comprehend that he was exactly the man who, in disposition and talents, would most suit her. His understanding and temper, though unlike her own, would have answered all her wishes. It was an union that must have been to the advantage of both; by her ease and liveliness, his mind might have been softened, his manners improved, and from his judgment, information, and knowledge of the world, she must have received benefit of greater importance. But no such happy marriage could now teach the admiring multitude what connubial felicity really was. An union of a different tendency, and precluding the possibility of the other, was soon to be formed in their family.

The new Mrs. Wickham will, following some dispute, be received at Longbourn. 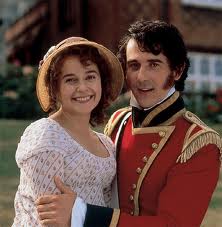 The happy couple prove themselves just as bad as anyone ever imagined:


Elizabeth was disgusted, and even Miss Bennet was shocked. Lydia was Lydia still; untamed, unabashed, wild, noisy, and fearless. She turned from sister to sister, demanding their congratulations; and when at length they all sat down, looked eagerly round the room, took notice of some little alteration in it, and observed, with a laugh, that it was a great while since she had been there.

Wickham was not at all more distressed than herself, but his manners were always so pleasing, that had his character and his marriage been exactly what they ought, his smiles and his easy address, while he claimed their relationship, would have delighted them all. Elizabeth had not before believed him quite equal to such assurance; but she sat down, resolving within herself to draw no limits in future to the impudence of an impudent man. She blushed, and Jane blushed; but the cheeks of the two who caused their confusion suffered no variation of colour.

Most important, this chapter begins to reveal the role Mr. Darcy played in bringing about the marriage


It was painful, exceedingly painful, to know that they were under obligations to a person who could never receive a return. They owed the restoration of Lydia, her character, every thing, to him. Oh! how heartily did she grieve over every ungracious sensation she had ever encouraged, every saucy speech she had ever directed towards him. For herself she was humbled; but she was proud of him. Proud that in a cause of compassion and honour, he had been able to get the better of himself. She read over her aunt's commendation of him again and again. It was hardly enough; but it pleased her. She was even sensible of some pleasure, though mixed with regret, on finding how steadfastly both she and her uncle had been persuaded that affection and confidence subsisted between Mr. Darcy and herself.

Her feelings find some release in being able to give Mr. Wickham a set down.