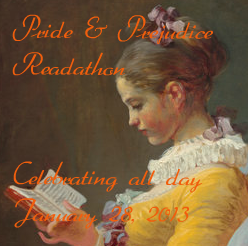 I often wonder if those who claim Austen's work lacks passion can have paid proper heed to lines like the following, but I suppose that some require bolts of lightening and cracking branches in order to know the depths of a hero's affection: "In vain have I struggled. It will not do. My feelings will not be repressed. You must allow me to tell you how ardently I admire and love you." And in spite of her disgust with this man, even Elizabeth must credit the intensity of his feelings:


In spite of her deeply-rooted dislike, she could not be insensible to the compliment of such a man's affection, and though her intentions did not vary for an instant, she was at first sorry for the pain he was to receive; till, roused to resentment by his subsequent language, she lost all compassion in anger.

And though there are no fires or rainstorms (in the book) to punctuate her words, to a man dreadfully in love, what could more violent than Elizabeth's reply rejection:


"In such cases as this, it is, I believe, the established mode to express a sense of obligation for the sentiments avowed, however unequally they may be returned. It is natural that obligation should be felt, and if I could feel gratitude, I would now thank you. But I cannot -- I have never desired your good opinion, and you have certainly bestowed it most unwillingly. I am sorry to have occasioned pain to any one. It has been most unconsciously done, however, and I hope will be of short duration. The feelings which, you tell me, have long prevented the acknowledgment of your regard, can have little difficulty in overcoming it after this explanation."

Mr. Darcy's mortification leaps from the page. The entire chapter buries the reader in an avalanche of the passion. I cannot read it without my heart racing in a most alarming fashion. "The pause was to Elizabeth's feelings dreadful." And the chapter is just getting starting.

I suppose I should resist the urge to go through, paragraph by paragraph, and indulge my feelings on this scene, but I must at least share some of the highlights:


"I might as well enquire," replied she, "why, with so evident a design of offending and insulting me, you chose to tell me that you liked me against your will, against your reason, and even against your character?

With assumed tranquillity he then replied, "I have no wish of denying that I did every thing in my power to separate my friend from your sister, or that I rejoice in my success. Towards him I have been kinder than towards myself."


"Your character was unfolded in the recital which I received many months ago from Mr. Wickham. On this subject, what can you have to say? In what imaginary act of friendship can you here defend yourself? or under what misrepresentation, can you here impose upon others?"

"And this," cried Darcy, as he walked with quick steps across the room, "is your opinion of me! This is the estimation in which you hold me! I thank you for explaining it so fully. My faults, according to this calculation, are heavy indeed! But perhaps," added he, stopping in his walk, and turning towards her, "these offences might have been overlooked, had not your pride been hurt by my honest confession of the scruples that had long prevented my forming any serious design. These bitter accusations might have been suppressed, had I with greater policy concealed my struggles, and flattered you into the belief of my being impelled by unqualified, unalloyed inclination -- by reason, by reflection, by every thing. But disguise of every sort is my abhorrence. Nor am I ashamed of the feelings I related. They were natural and just. Could you expect me to rejoice in the inferiority of your connections? To congratulate myself on the hope of relations, whose condition in life is so decidedly beneath my own?"


"From the very beginning, from the first moment I may almost say, of my acquaintance with you, your manners, impressing me with the fullest belief of your arrogance, your conceit, and your selfish disdain of the feelings of others, were such as to form that ground-work of disapprobation, on which succeeding events have built so immoveable a dislike; and I had not known you a month before I felt that you were the last man in the world whom I could ever be prevailed on to marry."

I find it rather amazing that Austen can maintain the intensity of this chapter into the next, let alone further heighten it, as she does. Excuse me, but even though I know what happens, I must read on. The letter calls.
Posted by Alexa Adams at 1:23 PM