They were all of them warm in their admiration; and at that moment she felt that to be mistress of Pemberley might be something!

There are few chapters in all as literature as gratifying as this one. We might argue to what degree mercenary influence has upon Elizabeth's rapidly altering opinion of Mr. Darcy, but I'd rather just bask in the glory of the moment. Besides, what human wouldn't be influenced by such a display? Compounded with Mrs. Reynolds praise and the true change in his manners, Elizabeth has every right to feel "flattered and pleased."

She has not allowed herself to reconsider the wisdom of rejecting Mr. Darcy's proposal until this moment, for her spirits will not allow her to dwell with sorrow on the immaterial. At the beginning of the chapter, she continues to delude herself with the notion of Mr. Darcy's general disagreeableness, using it as protection against "something like regret," but soon Mrs. Reynolds deprives her of this security:


"I say no more than the truth, and what every body will say that knows him," replied the other. Elizabeth thought this was going pretty far; and she listened with increasing astonishment as the housekeeper added, "I have never had a cross word from him in my life, and I have known him ever since he was four years old."

This was praise, of all others most extraordinary, most opposite to her ideas. That he was not a good tempered man had been her firmest opinion. Her keenest attention was awakened; she longed to hear more, and was grateful to her uncle for saying,

"There are very few people of whom so much can be said. You are lucky in having such a master."

Elizabeth almost stared at her. -- "Can this be Mr. Darcy!" thought she. 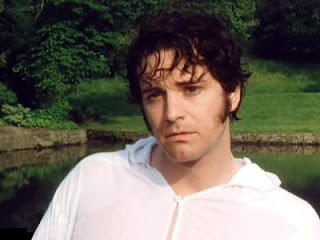 By the time they bump into the man himself (a surprise so sudden that to this day, every time I read it, I have to backtrack and make sure it really happened), Elizabeth is ready to be receptive to his renewed overtures, though still not daring to imagine its possibility. It's so charming how the blush and mumble to each other in greeting. We have never before seen Mr. Darcy so disarmed, or nearly so attractive. The first time I read the novel, a couple decades ago, I'm pretty sure I remember literally jumping for joy with each confirmation of his continued affection. The awkwardness and excitement of this moment is surprisingly romantic, and I've seen grown men (my husband) swoon like a teenage girl (maybe not quite), so triumphant is this moment in the book. That we are only at the very beginning of volume one is the immediate tip off that something must go wrong, but these first few chapters at Pemberley are some of the most gratifying in the book.
Posted by Alexa Adams at 5:17 PM