If I have highlighted the hypocrisy of Mrs. Bennet and Miss Bingley in earlier posts, neither holds a candle to what Mr. Wickham unleashes upon Elizabeth in chapter sixteen. He is a far more successful hypocrite, too, rendering him far more dangerous. Of course, none of this is apparent on a first read, and I should take a moment now to say what I have failed to mention before - this readathon is full of spoilers, people! Proceed at your own risk.


"I have no right to give my opinion," said Wickham, "as to his being agreeable or otherwise. I am not qualified to form one. I have known him too long and to well to be a fair judge. It is impossible for me to be impartial. But I believe your opinion of him would in general astonish -- and perhaps you would not express it quite so strongly anywhere else. -- Here you are in your own family."

"Upon my word I say no more here than I might say in any house in the neighbourhood, except Netherfield. He is not at all liked in Hertfordshire. Every body is disgusted with his pride. You will not find him more favourably spoken of by any one."

"I cannot pretend to be sorry," said Wickham, after a short interruption, "that he or that any man should not be estimated beyond their deserts; but with him I believe it does not often happen. The world is blinded by his fortune and consequence, or frightened by his high and imposing manners, and sees him only as he chuses to be seen."

"I should take him, even on my slight acquaintance, to be an ill-tempered man." Wickham only shook his head.

"I wonder," said he, at the next opportunity of speaking, "whether he is likely to be in this country much longer."

"I do not at all know; but I heard nothing of his going away when I was at Netherfield. I hope your plans in favour of the ----shire will not be affected by his being in the neighbourhood."

"Oh! no -- it is not for me to be driven away by Mr. Darcy. If he wishes to avoid seeing me, he must go. We are not on friendly terms, and it always gives me pain to meet him, but I have no reason for avoiding him but what I might proclaim to all the world; a sense of very great ill-usage, and most painful regrets at his being what he is."

Right there! Elizabeth, if she were not blinded by his charm and interest in his tale, should have alarm bells going off in her head. Did he just declare himself incapable to judge Mr. Darcy? He does it again:


"Society, I own, is necessary to me. I have been a disappointed man, and my spirits will not bear solitude. I must have employment and society. A military life is not what I was intended for, but circumstances have now made it eligible. The church ought to have been my profession -- I was brought up for the church, and I should at this time have been in possession of a most valuable living, had it pleased the gentleman we were speaking of just now."

"Yes -- the late Mr. Darcy bequeathed me the next presentation of the best living in his gift. He was my godfather, and excessively attached to me. I cannot do justice to his kindness. He meant to provide for me amply, and thought he had done it; but when the living fell, it was given elsewhere."

"Good heavens!" cried Elizabeth; "but how could that be? -- How could his will be disregarded? -- Why did not you seek legal redress?"

"There was just such an informality in the terms of the bequest as to give me no hope from law. A man of honour could not have doubted the intention, but Mr. Darcy chose to doubt it -- or to treat it as a merely conditional recommendation, and to assert that I had forfeited all claim to it by extravagance, imprudence, in short any thing or nothing. Certain it is, that the living became vacant two years ago, exactly as I was of an age to hold it, and that it was given to another man; and no less certain is it, that I cannot accuse myself of having really done any thing to deserve to lose it. I have a warm, unguarded temper, and I may perhaps have sometimes spoken my opinion of him, and to him, too freely. I can recall nothing worse. But the fact is, that we are very different sort of men, and that he hates me."

"This is quite shocking! -- He deserves to be publicly disgraced."

"Some time or other he will be -- but it shall not be by me. Till I can forget his father, I can never defy or expose him."

Elizabeth honoured him for such feelings, and thought him handsomer than ever as he expressed them.

This chapter almost reads like a cautionary tale. Elizabeth, with all her intelligence, listens to him say he can never do what he just did, and honors him for it. And he does it yet again:


After a few minutes reflection, however, she continued, "I do remember his boasting one day, at Netherfield, of the implacability of his resentments, of his having an unforgiving temper. His disposition must be dreadful."

"I will not trust myself on the subject," replied Wickham, "I can hardly be just to him."

Under Elizabeth's encouragement, he develops further and further slanders against Mr. Darcy, impugning his affection for Georgiana, and attributing an obligation to his father from the late Mr. Darcy, instead of the other way around. In all of her novels, Austen dwells on the differences between a persons actions and statement, demanding the former support the latter, but perhaps no more so that in Pride and Prejudice, and particularly in this chapter and the next. 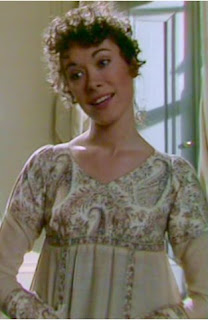 Chapter seventeen opens with Elizabeth conveying Mr. Wickham's account of Mr. Darcy to Jane. Jane might be overly unwilling to judge anyone harshly, but she shows far more sense and less prejudice than Elizabeth in this scene:


"Laugh as much as you chuse, but you will not laugh me out of my opinion. My dearest Lizzy, do but consider in what a disgraceful light it places Mr. Darcy, to be treating his father's favourite in such a manner, -- one, whom his father had promised to provide for. -- It is impossible. No man of common humanity, no man who had any value for his character, could be capable of it. Can his most intimate friends be so excessively deceived in him? oh! no."

"I can much more easily believe Mr. Bingley's being imposed on, than that Mr. Wickham should invent such a history of himself as he gave me last night; names, facts, every thing mentioned without ceremony. -- If it be not so, let Mr. Darcy contradict it. Besides, there was truth in his looks."

Truth in his looks! Oh, no. That certainly hold in Austen. This moment is detrimental in the development of Jane's worth, and it has been unfortunately overlooked in the film adaptations. It is best captured in the 1980 version, and if I did this right, the clip should be queued to the correct starting point. If not, and it begins in the middle of the Phillip's party, forward to 3:00.