Tranquility swaddled the ocean, and the docile waves that lapped against the side of the docked ship seemed to mock me, such a contrast they made with the tumultuous events of the past few weeks. I would almost have preferred to leave on an overcast morning when the howling wind whipped the waves into a mad groaning; that, I thought, would have been a more appropriate setting for my abrupt departure from the only world I had known and for this momentous day, which would sever me from those comforts of life I had once so dispassionately sought. 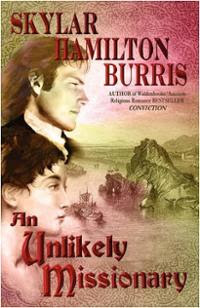 Several writers (including myself in my next novel, Holidays at Pemberley) have continued the story of Charlotte Collins, and each author who picks up a pen for the purpose must struggle with reconciling Charlotte's mercenary choice to wed Mr. Collins. Skylar Hamilton Burris begins An Unlikely Missionary by completely negating all Charlotte hoped to achieve in her practical marriage by shipping the Collinses off (thank you, Lady Catherine!) on an indefinite mission to India. Thrust into a society with entirely different rules and values, the ever pragmatic Mrs. Collins is forced to reevaluate her deepest held convictions, the disadvantages of an unequal marriage being multiplied under the scorching Indian sun. Though the novel is not intentionally comic, I had to laugh at Mr. Collins, inept in his own world, trying to assimilate to this new one. Charlotte, on the other hand, is almost immediately perceived as a valuable asset by the acerbic head missionary, Mr. Rivers.


He glanced toward Mr. Collins, who now preyed upon the malleable Mr. Hamilton. "I perceive that you are skilled at extracting the good from the bad. I think you will adjust over a short period of time."

I was reassured to hear this positive prediction of my future assimilation. I did not desire his approval, but if he thought me capable of adjusting. then the others - whose judgement I did value - must think so as well.

"Mr. Collins, however, will need your guidance and encouragement if he is ever to survive in this world.

As easy as it is to deride Mr. Collins, the forced change of circumstances brings out the best in him, as it does in Charlotte. While still inclined to boast of Lady Catherine's fireplace, he makes a legitimate attempt to acclimate and prove himself useful to his colleagues, while Charlotte, with her greater intelligence and perception, discovers a deeper level of devotion to the man she yoked herself to, for better or worse:


I had duties besides those of the mission. A stern word, "duty," I thought. It admitted so little room for love. Then I reasoned that if one loved one's duty, it would cease to be a duty.

And yet, my conscience whispered, does not God love a cheerful giver? I took a moment to offer thanks for my marriage, for what it had afforded me - stability, a child. I picked out those features of my husband for which I could be grateful - his fidelity, his soberness - and I meditated on these traits. I was ready now to rise and return to him, to share with him whatever I could manage to share. It would be enough.

It is impossible not to respect this extremely introspective depiction of Charlotte Collins. Of course there is a better end in store for her than a lifetime with Mr. Collins, that being an essential aspect in every story focused on Charlotte. Readers want to see her find happiness. This is more than a longing for a better romantic life for her: we want to know that Elizabeth's intimate friend is worthy of her regard. This novel is the most successful I have read in fulfilling that need. I'm ashamed it took me so long to read it, allowing it to languish for years on my desk. I have no excuse, particularly as I so enjoyed Ms. Burris' other works, Conviction and The Strange Marriage of Anne de Bourgh (read my review here). I highly recommend this author to all Janeites.

This review is my third for the Pride and Prejudice Bicentenary Challenge hosted by Austenprose.
Posted by Alexa Adams at 6:15 PM